Home Longform The Little Journal That Could 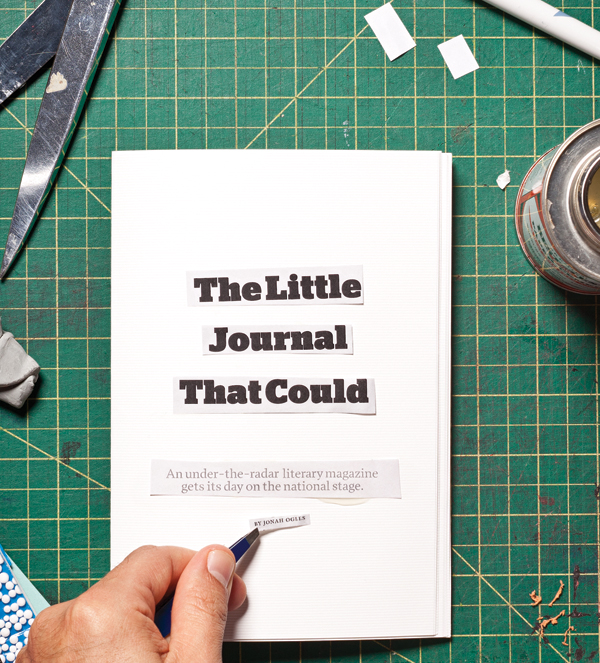 There is a cork sealing shut the most recent edition of Forklift, Ohio: A Journal of Poetry, Cooking & Light Industrial Safety, an independent literary magazine based in Cincinnati. Why, you ask? It’s a wine-themed issue. Each section includes a pairing; there are genuine wine stains on the cover; and jammed through each of the 260 pages is that cork. The issue even comes with a corkscrew, providing the most tactile experience you’ll probably ever have opening a new publication. But then, each biannual issue is made by hand, and it’s that level of craftsmanship that has made Forklift: Ohio one of the more talked about literary magazines in the country.

It started small. Matt Hart and Eric Appleby founded the magazine back in 1994, when they were new in town. The duo had published a lit mag out of their dorm rooms at Ball State University (it was called Nausea Is the Square Root of Muncie), and they, along with fellow Ball State alum Tricia Suit, thought that reviving it under a new name might be a good way to get plugged into the local poetry scene. So they began soliciting poems from friends and fellow poets in the area, creating a local network of supporters and fans. Once each year or so, they’d throw the poems together and print a tabloid-sized collection, interspersed with images from cookbooks or safety manuals that Appleby collected.

“Early on it was quite a bit more haphazard,” Appleby says. “We were young. We were audacious. And cramming these things together was meant to give you pause.”

As they got older and matured a little, so did the magazine. In 2000, Hart went off to one of the nation’s most respected creative writing programs at Warren Wilson College in the mountains of North Carolina. That’s where he handed a copy of Forklift to acclaimed poet Dean Young. “The moment I showed him the first copy,” Hart says, “he was like, ‘I’m going to give this to everybody. I’m going to give you poems. I’m going to get [Guggenheim fellow] Tony [Hoagland] to give you poems for this.’ ” It was the first of many connections Hart would make—connections that would spread the journal across the country.

“We have no advertising. No grants. None of the usual ways that you would spread the word about a magazine,” Hart says. “It was word of mouth, hand to hand.”

One of the poets who liked Forklift was Bob Hicok, who came to poetry after working in the tool and die industry and now teaches at Virginia Tech. He has contributed his own poems and turned his students on to the journal as well. Most literary magazines are staid, legacy publications tied to universities. Forklift is different. “They seem to me to be more playful,” Hicok says. “More willing to try things. It shows up in their covers.” That wine cover, for instance. Another featured a drawing of a turkey’s head. On top of its neck was a bullseye, which was riddled with holes from when the creators of Forklift fired at the cover with a shotgun.

“There is always a bit of an absurdist streak in what we are doing. We take nonsense seriously,” Appleby says. “The idea is that you can use that as a means to discover happy accidents in language. We take the best work we can find, and we try to bump it up against some of the everyday language: Add a cup of flour. Watch your step. When this ordinary language is bumped up against something else, it gains new meaning.”

The philosophy has clearly struck a chord with fellow poets. Today, Forklift’s list of contributors reads like a who’s who in the poetry world, including Mary Ruefle, and Matthea Harvey in addition to Young, Hoagland, and Hicok. Just as important to the founders, the journal publishes on-the-rise poets such as Katherine Sullivan and Rob Kenagy (both of whom are former students of Hicok’s). It’s a wide-ranging roster, one that’s more diverse than you might find at a college journal. “They are not encumbered by some tradition or structure like a university,” Hicok says. “They’re just doing their thing.”

As more people saw the journal—and liked it—the submissions got better. “There were times when we were getting submissions from people that had real potential for development,” Hart says.

Eventually, they decided to publish chapbooks. They’ve done 10, all of them made by hand (about 150 copies of each). This year, they published their first full-length book of poems, Wolf’s Milk: The Lost Notebooks of Juan Sweeney, a persona of writer Chad Sweeney.

Although the analogy to the famous hip hop record label may sound far-fetched, that growth is what makes Forklift so remarkable. Not only is it still going strong after 18 years—it keeps expanding, both in renown and scope. Have they ever thought about doing it full-time, quitting their day jobs as teachers and marketing directors and sommeliers to dive into the world of poetry day after day? Not a chance.

“One of the things we like about it is it’s not our job,” Suit says. “You don’t get tired of what you do.”

“Some people have boats. Some people golf,” Appleby says. “I have a poetry journal.”

Their Own Dime
The downside to not being tied to a university, of course, is that all of the costs come straight out of the creators’ own pockets. “We basically try to make the issue pay for itself,” says Tricia Suit, the managing editor. Copies cost about $13.

Their Own Bare Hands
Everybody plays a part. Suit keeps everything organized; Appleby designs the issues; and Hart is the editor. (Amanda Smeltz helps with poetry, and Merrill Feitell with fiction.) Once they’ve gathered the submissions, they make each copy by hand, usually in a single weekend.

Shotgun
Eric Appleby on the inspiration for the 2008 shotgun cover: “I’m not a fan of guns, but I was flipping through this book and there was a whole section about adjusting your shot pattern. We had a friend who collects old guns, so we actually shot holes in them.”

Oeuvre
In 18 years, the Forklift staff has printed 24 issues, 10 chapbooks, and one full-length book. Items are available on forkliftohio.com; the current issue is on sale at Picnic & Pantry in Northside.

Originally published in the September 2012 issue.
Photograph by Jonathan Willis.