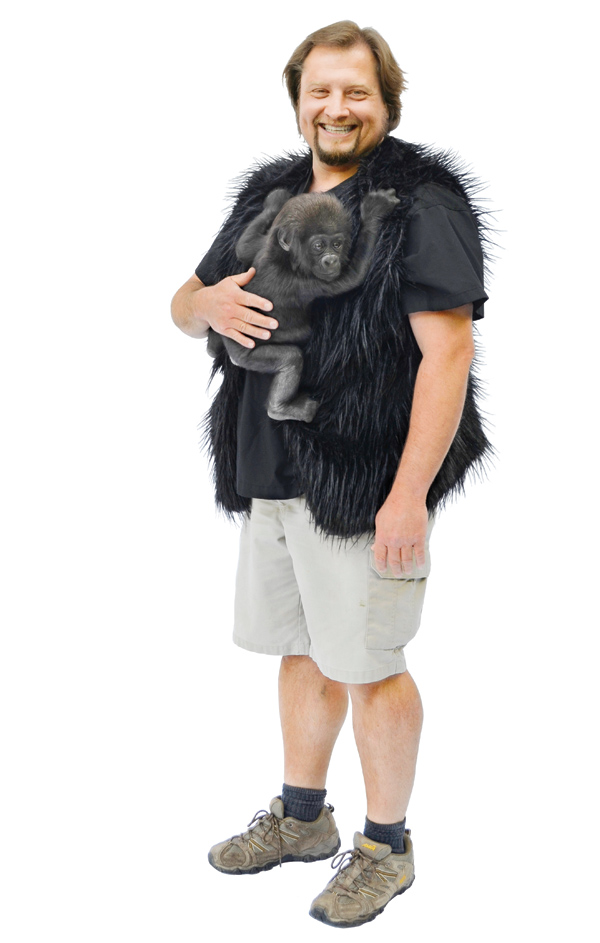 Editorial update: In June, 2013, the Cincinnati Zoo announced that Gladys began the introduction to her new adopted mother, “M’Linzi.”

Last Februrary, a western lowland gorilla named Gladys was born in the Brownsville, Texas, zoo, only to be rejected by her mother. Enter Ron Evans, Primate Center Team Leader at Cincinnati Zoo & Botanical Gardens and one of Gladys’s 10 human surrogate mothers working to integrate her back into gorilla society.

We wear fuzzy vests, so it feels like gorilla hair. We can’t 100 percent duplicate what gorilla hair is going to feel like, so we have different textures. Then when she finally goes in with a mom, she’ll be like Oh, this is just another texture. It’s no big deal.

We do gorilla vocalizations—these deep, guttural belches—to Gladys. They are a comforting vocalization, even though to us it might be scary. But to a gorilla, it’s soothing. Especially if she’s against your chest, and she hears this Hrmmmughmughmugh and feels the vibrations. Later, when she starts getting a little feisty we have to chastise her like a mother gorilla might. Whatever a gorilla does, we do.

There are four candidates to be Gladys’s surrogate gorilla mother, and she gets time with all of them. Gladys puts her hands up on the mesh fence—we call it a “howdy mesh”—and the gorilla mothers come over very gently and touch her fingers.

M’Linzi [a zoo gorilla] is one of the front-runners to be surrogate. She’s shown the most interest. She does silly little play behaviors through the mesh. The other day she was lying on her back, kicking the mesh, trying to incite a play behavior with Gladys. Those are the kind of things we’re trying to read.

The most important surrogate behavior is 24/7 contact. Gorillas grow about twice as fast as humans, but it still takes about 10 years for them to learn all their life lessons. And all through this, they need their mom. That’s the most important “gorillafication” step we have for Gladys: to not let her get used to being on her own.

The Handoff
Gladys interacts with and knows the gorillas, but right now she’s more comfortable with the human surrogates. “That’s why it’s important to quickly integrate her with a gorilla,” Evans says. “Because the older she gets, the more she’s going to imprint on people.”

Face to Face
Gladys can tell the difference between a human face and a gorilla face. “We always throw around the idea of wearing gorilla masks, but that would just be too confusing,” Evans says. “It’s important that Gladys sees our facial expressions, even though they’re a little bit different-looking than a gorilla’s.”

Tough Love
Gorilla females are four or five times stronger than a human, and they’re not gentle when they groom their babies. “When we groom her, we have to dig real hard,” Evans explains. “We’ll even pluck a hair, and we’ll chew on a spot, pinch her skin. It would just make a little baby cry, but Gladys likes it.”