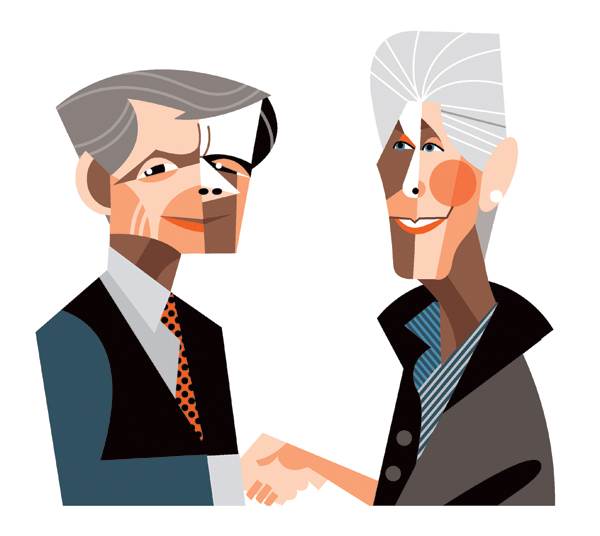 Can’t we all just get along? It’s not always easy, as amateur peacemakers Brad Paisley and LL Cool J recently discovered with their song “Accidental Racist.” Former federal court mediator Robert Rack and Center for Resolution of Disputes Senior Mediator Bea Larsen know how it’s done. On the 10th anniversary of 9/11, they were inspired to do something about vitriol in politics, and brought their experience solving disputes to bear on the civic and political sphere. Their nonprofit, Beyond Civility, hosts workshops and public Side-by-Side conversations to teach leaders how cool-headed dialogue can make government work.

Fiery words have been part of civics since the ancient Greeks. Where do you draw the line between healthy and unhealthy emotional debate?

Larsen: The last Side-by-Side we conducted was with Jerry Springer and Ken Blackwell, and it went a little bit off the rails. I could have stepped in and brought them back, but there was a fair amount of passion in the statements they made about their beliefs. Jerry lost much of his family in the Holocaust and Ken’s early life story is also filled with emotion. Even when they veered off into talking about politics, it was passionate, but civil and respectful. I think emotion can be a very positive thing, as long as it’s treated respectfully.

How do you approach the problem when people are on either side of a faith-based divide?

Rack: Our country has a long commitment to keeping government secular. There’s a lot of pressure right now running against that policy, but it is at the heart of our constitutional process. Whether it’s religion or politics, at some point you want to say: Can we just lighten up a little bit? Can we all just have a cup of coffee and be friends? It isn’t impossible. It just takes a willingness. And these ideologies that seem to be dragging people apart are largely a product of where you come from, what your family was, what your experiences were in early life. Recognizing there are circumstantial sources to our beliefs helps.

Larsen: The key is you can disagree and be passionate about your cause and still respect the other person, and just getting to know folks reduces the likelihood you’re going to demonize them.

How do you begin to do it?

Rack: Our choice has been to personalize people to each other so that they realize there’s sincerity there—a history, a background, and a reason that person has come to think what they do.

What about the fact that politics have become so polarized that voters often support someone or something they’re not actually happy with, simply because they see it as the “lesser evil” of only two options?

Rack: There’s this adversarial attitude, similar to what I thought for years characterized labor-management relations, where one side will do anything to undermine the interests or the effectiveness of the other, even if it means killing the goose that laid the golden egg. If people just put down that adversarialness and actually talk to each other, they can solve problems. There’s no reason it can’t be done. At a time when our sources of news are polarized, people watch, access, and expose themselves mostly to information sources that keep confirming their beliefs. If you express the other guy’s point of view sincerely, they know you understand. The way we debate things now is designed to obfuscate, avoid, or evade the tough issues rather than deal with them. But in a reverse discussion like this…

Larsen: My fantasy is I wish a year ago we’d had Cranley and Qualls at a Side-by-Side. We’re trying to avoid putting people on who are engaged in a political campaign. As it turns out, we haven’t been able to do that.

Rack: People keep running for election after we schedule them.

Originally published in the June 2013 issue.