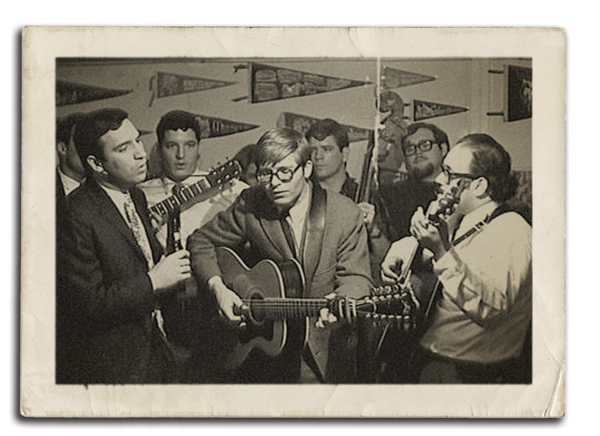 I still remember the first time I walked down the steps into the crowded Wise Owl Coffeehouse in the basement of the Calhoun Street YMCA on the University of Cincinnati campus. It was a Sunday night, and I was a Xavier University student with a Gibson LGO stuffed in the trunk of my Austin-Healey Sprite, always ready to sing one of the hundreds of tunes I’d memorized. The rays of a spotlight poked through the cigarette haze as a long-haired girl sang Joan Baez’s “Silver Dagger.” I knew instantly that I had found a home for my musical passion. I couldn’t have predicted that it would last for the next 50 years.

In 1963, a couple of UC students formed a club called the Queen City Balladeers and opened a “listening room”—no talking or heckling allowed—where amateur folk singers could test their skills, emulating performers like Baez, Bob Dylan, and Peter, Paul, and Mary. We were fired up by civil rights marches and by the ominous news coming out of Southeast Asia; the Wise Owl—its name eventually changed to Leo Coffeehouse—became a home for music that spoke to us and for us.

Ironically, not long after Leo and Queen City Balladeers got on their feet, the nation’s folk music craze faltered. The Beatles’ arrival in the U.S. in 1964 signaled the beginning of rock’s dominance on the pop charts. Folk music shrank back—not to oblivion, but to a modest musical niche.

This year, the Queen City Balladeers and Leo Coffeehouse celebrate 50 years in that rich, well-loved niche. Almost every Sunday night from September to May “one of the oldest and longest-running folk venues in America” (according to their website) holds forth. It’s now located in Founder’s Hall at Zion United Church of Christ in Norwood, with summer concerts in Eden Park’s Seasongood Pavilion. That’s the power of folk music: the Queen City Balladeers have lasted longer than the Beatles, Jefferson Airplane, Michael Jackson, and the White Stripes, and their “listening room” is still a place for people of all ages to sing, play, or just enjoy music among friends.

Woody Guthrie once said that folk music was best when it required no more than two chords. Does that longevity come from the enduring simplicity of this genre, or the steely will of some Cincinnati folks? It’s hard to know. But one thing’s for sure. The Albee and Palace Theaters are gone. Leo still stands.

Cincinnati Once Believed Radium Could Cure Anything, If Only We Could Afford It