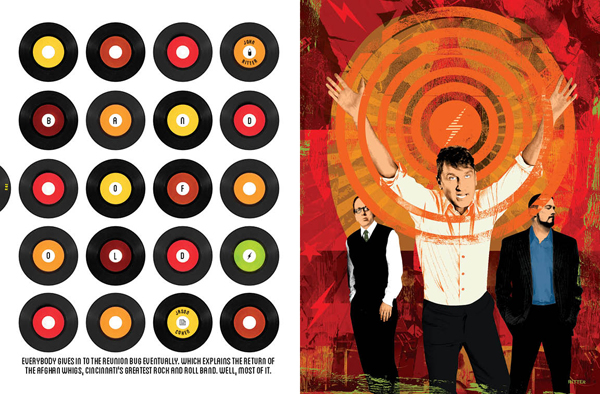 The band playing at Bogart’s on October 25 is not the Afghan Whigs.

That is just my personal opinion, mind you—one that is not necessarily shared by most fans, let alone the Whigs themselves. But the newly reunited, semi-legendary Cincinnati band achieved its high point—the deliciously black-hearted 1993 album Gentlemen—with the original lineup of frontman Greg Dulli, guitarist Rick McCollum, bassist John Curley, and drummer Steve Earle. And Steve Earle will not be there.

Reunion-wise, the Afghan Whigs were just about the alt-rock white whale, the one big ’90s band from (for lack of a better descriptor) the Nirvana generation that had not taken the call from Coachella, Lollapalooza, or some other checkbook-wielding festival. The Pixies. Pavement. Pulp. Soundgarden. The Jesus Lizard. Even the 20th anniversary show put on by the band’s former label, Sub Pop, which featured several big-deal time-machine sets from the Grunge Years, didn’t make it happen. (Instead, the Gutter Twins, Dulli’s collaboration with Mark Lanegan, headlined its own club gig during the weekend-long event.)

“We said what we had to say. I see why people do it, but it’s not for me,” Dulli said of the possibility of a Whigs reunion in this magazine two years ago.

That was shortly before he played a solo show at Oakley’s 20th Century Theater—the very gig that actually helped jump-start this reunion. He played several old songs for the first time on that tour (something he didn’t generally do in his post-Whigs band the Twilight Singers); Curley joined him onstage in Cincinnati, and then Dulli reconnected with McCollum in Minneapolis, where the guitarist had been living since the time of Gentlemen. A fortuitous offer by the rock festival All Tomorrow’s Parties to play shows in the U.K. and New York finally put it all in motion.

No fool, Dulli knew that he had broken a campaign promise, but who doesn’t break a few? “As far as making grand pronouncements about anything in my life, I’m never going to do that again,” he told Rolling Stone before the band played its first shows in May.

Duly noted. Except it felt weird to see the band hit the road again without their original drummer. Earle had left the Whigs, with prejudice, well before they completed their 1996 album Black Love. He was replaced first by Paul Buchignani and then Cincinnatian Michael Horrigan (who also used to play with Throneberry). Now, I know that Black Love and 1965, the band’s final album, have their adherents, and that certain songs off those records are considered downright canonical. But it’s a reunion tour, so it ought to be the band’s most classic lineup playing their most classic material. When you re-animate a corpse, you also get to pick how old the body will be.

When R.E.M. announced its breakup last year, there were lots of jokes about them reuniting at Coachella in 2020. When that time comes—and it will come—will they do it with Bill Berry, their drummer from the start, and for all of their peak years? Or will they do it with the mishmash of drummers and auxiliary members that have been a part of the band since he left? That’s kind of what the Whigs have done by getting back together without Earle.

Of course, this is rock and roll. Rules don’t generally apply. The Replacements made three records after their original guitarist (and drunken heart) Bob Stinson bowed out; the Rolling Stones still technically exist without Bill Wyman. The era of the post-historical life—a timeframe in which pop-cultural personages and events (especially rock bands) go on living, even thriving, via the magic of the reunion, the rerelease, the 20-bit remaster of their golden greats, or the PBS fund-raising telethon—presents a legitimate conundrum for music fans. You liked the band then because of who they were then. In fact, you still listen to them now because of who they were then. A select few performers have successfully shape-shifted over time (see the Grateful Dead), or aged with gravitas (see Bruce Springsteen, Neil Young), but most become shadows of their former selves. It can be hard for die-hard fans to roll with that kind of rock.

“Bands fall into a gray area when people leave, or die, and the band carries on,” critic Sasha Frere-Jones of The New Yorker wrote in an online chat with fellow writer Kelefa Sanneh in 2009 on the occasion of the reunion of Pavement, the once (and future!) princelings of the 1990s indie rock scene. “It’s up to the fans to decide whether or not that is the band.”

To which Sanneh countered: “Yes, we want to see the main person or people. But—if it’s not too much trouble, dear broken-up bands of the world—we would also prefer to see the same drummer who played on that record we love, even if a replacement drummer would be equally or more competent. We want it to be the way we always pictured it in our heads. All concerts are rituals, reunion concerts more than most; we want the details to be right, even if we can’t explain why they matter.”

Here’s why I think it matters. If a band’s a band, not just a lead singer plus some other guys (or a singer and guitarist plus whoever), there’s something they achieved that a reunion ought to recreate. It’s more than just revisiting old songs. There’s a sound, a dynamic, the way they looked together, the way they played together, the mix of personalities visually and sonically, that is unique to any given lineup. That doesn’t mean a lineup with replacement members, or the inevitable taking on of extra players and new collaborators, can’t result in interesting music. It’s just not the same band.

Dulli obviously anticipated that there’d be a little bit of clamor for the missing drummer, even though as far as I can tell from cursory Googling, he’s managed not to utter the man’s name. “Three guys started the Afghan Whigs, and three guys made all six albums,” he told Simon Price in an interview for the British pop  culture website The Quietus. “Those are the three guys you’re gonna see…. We are the Afghan Whigs.”

According to Bob Gendron’s book about the making of Gentlemen—part of Continuum’s 33 1/3 series devoted to beloved albums—Earle didn’t even write a lot of his drum parts (Dulli did). But he still played them as only he could, and watching YouTube footage of the Whigs at May’s Primavera Festival in Barcelona, and Lollapalooza in Chicago this past August, it still felt like Symington was covering those old beats. It also reminded me of the last time that I saw The Who. This would ordinarily be a major compliment; I can still remember geeking out with John Curley over Quadrophenia and John Entwistle when I wrote about the Whigs in 1994. But John Entwistle died 10 years ago, and Keith Moon long before him, so The Who are simply not The Who anymore. The band you may have just seen play at the Olympics (or the Super Bowl a couple of years ago) are The Roger Daltrey and Pete Townshend Show, with a talented but bloodless rhythm section (session bass ace Pino Palladino and Ringo Starr’s son Zak Starkey on drums), plus an extra guitarist (Pete’s younger brother Simon) and a keyboard player. They just don’t feel like The Who, which were not only four specific guys, but also, FOUR GUYS.

The trapezoid of the four-piece band presents itself in a certain way physically, as does the triangle of a power trio. How they look, where they stand, how they interact is as freighted with purpose and meaning as the set and staging of actors in a play.

To be fair, the Whigs had stopped being just four guys after Gentlemen. Their stages creaked with keyboards, back-up singers, extra members—par for the course when any humble little band becomes ambitious or proficient. I didn’t really like that phase. That’s partly because I had a preference for Steve Earle’s drums, but also for the more stripped-down (yet still quite grandiose) sound of Gentlemen and their third album, Congregation. I never thought the band’s attempt to be the heirs of King Records was entirely convincing, either. Somewhere along the way they went from being a rock band that played soul and R&B covers in a way that was sui generis—The Supremes’  “Come See About Me” and Freda Payne’s “Band of Gold” were favorites—to actually giving the impression that they considered themselves a soul band. To my ears, the more Dulli indulged his ambitions to make art, the less artful it became.

It could be that the decision to not include Earle may come down to not wanting to hang out with the guy for six months. Plain and brutally simple. In Gendron’s book, published in 2008, Dulli was still bitter that Earle quit before the band could play the final show of the Gentlemen tour (at Bogart’s, no less), which cost them a $12,000 guarantee. “At that point I was like, Fuck you, dude…fuck you forever,” he says. “You’re dead to me.”

That’s too bad, since there’s something to be said for reunions overcoming personal animosity, be it in the name of art or money. But I can see Dulli’s point. “My motivation is to sing these songs with my old friends,” he said in that interview with Simon Price, and Earle is plainly not one of them. (He still lives in Cincinnati and plays around, though. According to Facebook, Earle is in a new “sonic moonedelic cosmic rock” band called Moonbow.)

Dulli’s belief that the original band got out at the right time and did all they had to do is supported by the reunion tour set list. He’s clearly as proud of the late-period songs as the early or middle-period songs. I respect that, even though I’d rather just hear them play Gentlemen from top to bottom. As a reunited band, you can’t really win the battle of Nostalgia vs. Moving Forward, of Being Faithful to Something vs. Experimenting. At this point, the Afghan Whigs don’t exist in objective reality. They exist in the space between my—and everybody else’s—memories and their current incarnation. I still want them to be what they were when they mattered to me most (and to most people the most) but they stopped being that long before they stopped making records. Which means they can’t be faulted for their interpretation of what constitutes a good reunion—but neither can I.

It is what it is: one fan’s bittersweet reckoning. At least I can still go to the show knowing they’re gonna play “Miles Iz Ded.”

Illustration by John Ritter
Originally published in the October 2012 issue.