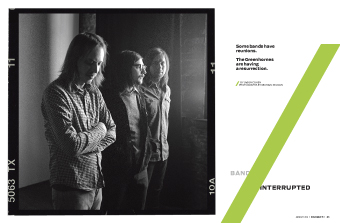 The last time The Greenhornes made a proper album, Barack Obama was an Illinois state senator, Jack and Meg White of the White Stripes were still claiming to be siblings, and there was no such thing as Facebook. Eight years later, Greenhornes drummer Patrick Keeler had to “Like” his own band’s fan page. “Does anyone know who admins this?” he posted on the “wall” back in September. “The Greenhornes would really like to take the reins on this page….”

That’s because the Cincinnati-via-Dearborn County garage-rock trio came back almost out of nowhere. Sort of. As recently as August, bass player Jack Lawrence was still on tour in Jack White’s second “supergroup,” The Dead Weather (Lawrence and Keeler also play with White and indie popsmith Brendan Benson in The Raconteurs). One month later, The Greenhornes played All Tomorrow’s Parties, the prestigious indie-rock festival in upstate New York, at the behest of filmmaker (and fan) Jim Jarmusch. And on November 9, ****—pronounced “four stars”—came out on White’s label, Third Man Records; it is the band’s fourth full-length album (one reason for the title) and first record of any kind since late 2005. When The Greenhornes played their album-release show at the Southgate House two days before Halloween, their zombie make-up cried out, “Back from the grave!” Garage-rock pun intended.

“That’s from our new album!” singer and guitarist Craig Fox said after finishing one song early in the set, his tone suggesting that he couldn’t quite believe that such a thing existed either. Recorded here at Ultrasuede Studio and at Benson’s studio in Nashville, **** is a smooth and soulful set of what can only be called classic rock. Though the band has long been ID’d as “garage,” and lives according to the do-it-yourself, no-frills ethic of punk rock, it also draws heavily on influences like Motown, Led Zeppelin, The Animals, and The Beatles. From the instantly hummable “Better Off Without It” to the rolling hooks of “Underestimator,” **** is the sound of a band that got better by basically not existing for five years.

The conventional wisdom says The Greenhornes went into suspended animation due to Keeler’s and Lawrence’s more prominent new projects. And given that they had the chance to make an actual living playing music with White, one of the most important rock musicians of the young 21st century, who could really blame them? But the reality was more happenstance. “We took a break,” says Keeler, a voluble presence both behind the drums and as a spokesman for the band. “We’d just been working really hard, and traveling a lot, kind of on our own dime a little bit, and it was just getting to be a little too much. We started this band almost 10 years before that [in 1996], so it was time.”

In 2004, White had invited Keeler and Lawrence down to Nashville to work on Loretta Lynn’s eventual Grammy-winning album Van Lear Rose. “They were the best rhythm section around then, and they still are,” says White. “They have always been my secret weapon.”

The two bands have a shared history going back to the late ’90s. The Greenhornes loved to play Detroit, the ancestral home of kindred forebears The Stooges and the MC5, as well as latter-day garage/punk rock legends like The Gories and The Hentchmen. “We met Jack before we even knew he was in a band,” says Keeler. Shake It Records co-owner Darren Blase remembers both groups playing together at the Clifton underground venue Electric Company in 1998 (the White Stripes were the opener) and also shopping at his then-new store. “They were just both taking a stab at it,” Blase says.

Turns out the White Stripes had the bigger knife. In 2005, The Greenhornes put out an EP (East Grand Blues) on V2 Records through White’s label, as well as a best-of retrospective (Sewed Soles). The band seemed primed for a mainstream moment on their old friend’s coattails but they were still worn out from two long years of touring. As it turned out, the East Grand Blues recording sessions, which took place at Benson’s home in Detroit, ended up spawning The Raconteurs. When White and Benson relocated to Nashville, so did Keeler and Lawrence.

“It just got longer than expected,” says Fox of the group’s hiatus. He and Keeler, now both 35, grew up together in St. Leon, Indiana, along with former members Brian Olive and Jared McKinney (until 2003 The Greenhornes were a five-piece). Keeler’s mother worked for Procter & Gamble and his father for the U.S. Postal Service; Fox’s father worked for Seagram’s and had a nice stash of Beatles and Led Zeppelin records. After high school, the two moved to Cincinnati, where they met Jack Lawrence, a.k.a. The Member of The Greenhornes You Probably Recognize. With his center-parted, dyed black hair and untinted Wayfarers, the baby-faced Lawrence, 33, stands out as a kind of hipster dandy nerd. At the Halloween show, two people came dressed as him, with stringy wigs and thick black glasses.

Much of the material on **** dates back to 2007, when the band regrouped at Ultrasuede. “We didn’t really have a plan for it, we just wanted to do it,” Keeler says. “Craig’s been my best friend since we were 15, 16 years old. We always stayed in touch.” But the next thing anyone knew, The Raconteurs (and later The Dead Weather) took priority again. “Jack White Still Holding Greenhornes Rhythm Section Hostage,” went one headline on a CityBeat blog post.

“No,” is all Fox says when asked if he’s ever joked around with White about such comments. “What are you gonna do?” he shrugs.
“Fight him,” Keeler jokes.

It’s not like White’s some Golden God who plucked The Greenhornes’ rhythm section from obscurity or interrupted Fox’s rock star dream. For a seasoned frontman, he lacks the hyped-up, narcissistic gene that fuels such dreams. Which suits The Greenhornes’ music fine—it speaks for itself. And, it seems, for Fox as well. (“I see him three times a day, and all he says is, ‘Hey,’” says one patron of The Comet, the bar and performance space in Northside where all three of The Greenhornes have at one point or another worked and played.) And rock star dreams can have their downside anyway. Simply because of his fame-by-proximity to White, Jack Lawrence attracted the attention of the New York Post’s Page Six gossip column—among other media outlets—a couple of years ago when he got into a legal spat with an ex-girlfriend.

That doesn’t mean Fox hasn’t stayed busy over the last five years. While his friends were gallivanting around the world on what he calls “the rock tours,” he was honing his craft in a series of bands in Cincinnati, including the bloozy trio Oxford Cotton and a collective of ex-members of various local bands of note (Pearlene, Heartless Bastards) who have a standing gig at the Comet on Monday nights.

Certainly, Fox cannot begrudge his bandmates’ time with White. “The break actually got us more fans than all the work we did trying to get fans,” Keeler notes. Fox has found himself talking after shows to 18-year-olds who got into The Greenhornes when they were 14 or 15, and that’s almost entirely because of The Raconteurs. White is both The Greenhornes’ biggest fan and their music-business patron. When it came time to put the finishing touches on ****, Fox went down to Nashville to work with Brendan Benson on the vocals, which seem a bit warmer and more melodic than The Greenhornes’ older stuff.

“I never had any intention of trying to make [the band] more poppy or melodic, [but] I think they may have felt a little typecast in the garage rock scene and that I might be able to offer them some space to breathe,” says Benson, an unabashed fan of the singer-guitarist he shares a rhythm section with. “His effortlessness never ceases to amaze me,” he says of Fox’s songwriting. “I always said he was the Brian Wilson of garage rock.”

Maybe so. But really, **** deserves the label “classic rock,” because to play a certain brand of niche electrified music in 2010 is to be playing a legitimate American folk art form—one that doesn’t often make bands money or get them airplay, just like folk, jazz, and the blues. “They swing, and not many bands know how to do that,” says White with admiration. The Greenhornes’ melodies and energy and vibe are to a degree timeless; along with White, they’ve helped nurture a new generation of fans who are not only discovering the music but also the vinyl album, sales of which have increased over the past few years. Which explains why **** has come out on four different shades of colored vinyl; as of early December, Shake It Records had sold around 200 vinyl copies and 150 compact discs.

In fact, putting the album on CD and making it available in the iTunes store was practically an afterthought. (Though they did manage to set up a separate Facebook page.) “I just always bought records anyway,” says Fox, who still frequents Shake It regularly. “I’m not, like, trying to be a dickhead, but I’ve never actually downloaded anything.”

Photograph by Michael Wilson
Originally published in the January 2011 issue.