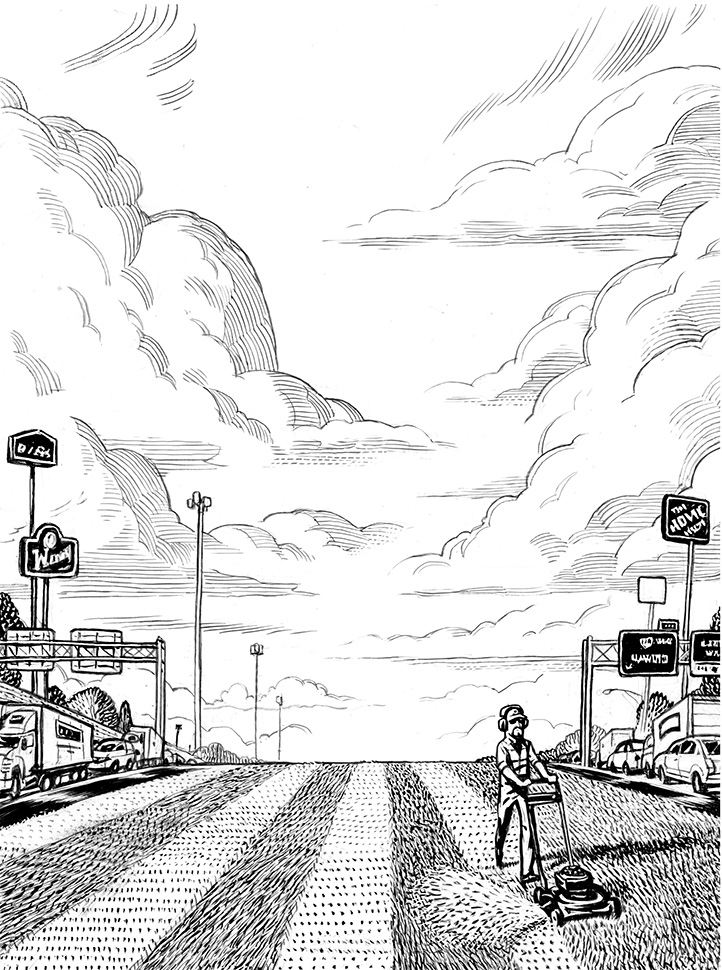 Why is the median on I-75 in Butler County so incredibly wide? It spreads out near Sharon Road and stays that way up to Liberty Center. Google Maps shows no other area interstates with such a farmable span. I don’t want to think what it costs to mow and maintain it. —ROAD WORRIER

Once again, we see the monumental accomplishments of knowledge that can be achieved by those who have too much free time. Your digital shoe-leather investigation inspired the Doctor’s unwavering commitment to finding an answer, no matter the difficulty.

It took one phone call. Liz Lyons at the Ohio Department of Transportation explained the obvious: Sections of our interstates were built with room to add more lanes when future traffic patterns require them. For instance, next time you cross the newly-rebuilt Jeremiah Morrow Bridge on I-71, notice how very wide its shoulders are. “That’s so we can turn parts of the shoulders into new lanes when needed,” she says.

We have not yet found the section of the Ohio code that prohibits any new highway lanes from being added until traffic has become completely unbearable, and only then can the road be closed for two years, crippling entire neighborhoods. Currently, this area of I-75 is not yet cluttered enough to qualify. Two more malls, then we’ll talk.

My mother has an old vinyl LP with Aretha Franklin’s 1985 hit song, “Freeway of Love.” The cover artwork shows Aretha in her pink Cadillac with an unmistakable Cincinnati skyline behind her. What’s the story? Isn’t she all about Detroit? —YOU BETTER THINK

First, your egregious violation of 1980s vinyl categorizations demands correction. This record is not an “album” or “LP,” despite the resemblance. It is a “maxi-single,” containing only the aforementioned song and a few of its dance club mixes. These “12-inchers,” as insiders called them, were lower-priced niche products of the era. Now, with the Doctor’s OCD issue resolved, let us exhale, wash our hands eight times, and proceed.

How did Aretha Franklin, so deeply identified with Detroit, get a Cincinnati skyline painted behind her? The answer, ironically, comes from the east and west coasts. Think of that legendary New Yorker magazine cover, showing how its residents view the rest of America as an amorphous, generic blob; all those Midwestern skylines are interchangeable. Your record’s cover art seems to demonstrate the same attitude emanating from Los Angeles, home of Arista Records.

The Doctor managed to find some people who worked at Arista’s art department back when Aretha’s record was released. The most substantive response he received was that “possibly the art director thought it was Detroit. We didn’t get out much.” Other responses were variations of, “Hey, dude, it was more than 30 years ago, and do you have any idea how high everybody was?” ’80s rule!

My dad and I were discussing politics, which thankfully goes better for us than it does for many of our friends. When we got around to whether or not America is becoming Nazi Germany (we agree that it’s not), he suddenly mentioned that Cincinnati was once the headquarters of the American Nazi Party. Is that true?     —SAY IT’S NOT

It’s not. But it almost was, sort of. In any case, it lasted only slightly longer than the first act of Springtime for Hitler.

In the summer of 1971, there was a small group calling itself the National Socialist White People’s Party. They were apparently somewhat blurry about the meaning of “national,” as they were based in Toronto. Moving to Cincinnati made sense, they claimed, because “the Roman general Cincinnatus wrote a book exposing Jewish corruption.” Here they were not just blurry, but cross-eyed: Cincinnatus lived in ancient Rome, but that book was written in 1940 by an author using a pseudonym.

The group called itself an “offshoot of the American Nazi Party,” perhaps hoping to bask in that organization’s sunshine. Their “headquarters” was a post office box in South Lebanon. Actual headquarters were harder to come by, as the group tended to get evicted each time their landlords figured out who they were. Gatherings also kept getting canceled, thanks principally to The Cincinnati Enquirer reporter Frank Weikel, who repeatedly outed the group’s activities in his column. They finally retreated to their natural habitat, under the refrigerator.