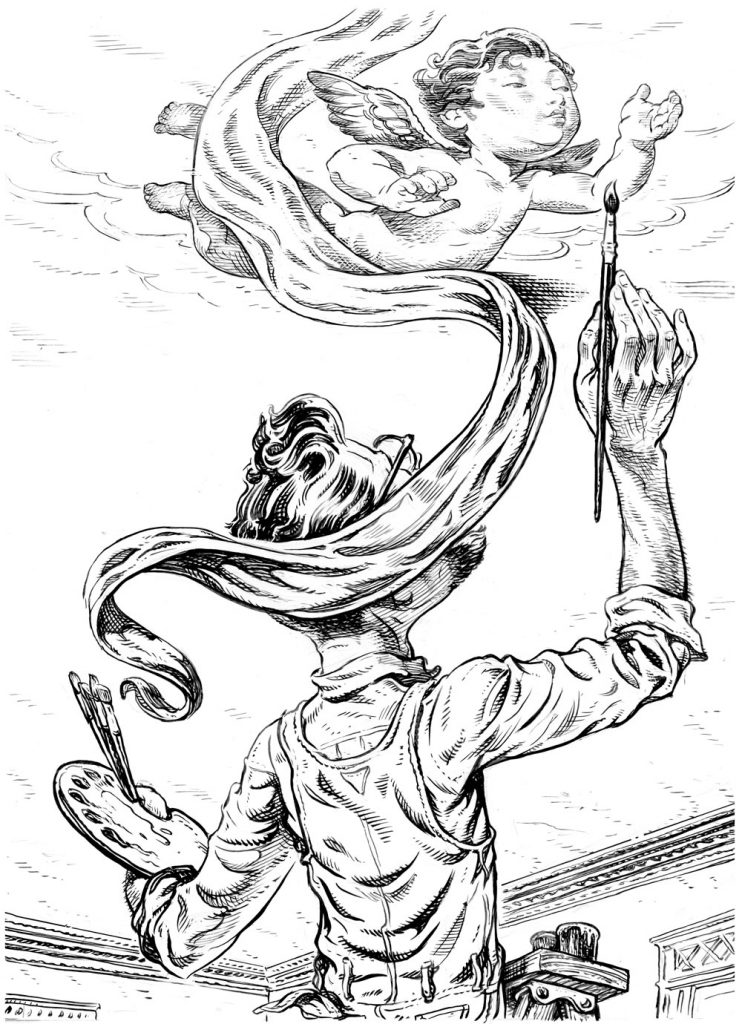 I’m on a team in Clifton that’s renovating a beautiful century-old mansion. We know a lot of its history, but there’s one detail that eludes us: a gorgeous mural on the living room ceiling that has no signature. Come take a look at it, and please help us identify the artist. —WHO DUN IT
Dear Who:

The Doctor thanks the Dragonfly Foundation for offering a grand tour of its future facility. The mural is, indeed, quite beautiful, but unsigned. To begin our research about this historic home, let’s see what Ye Trusty Olde Internet has to say: The mansion was built in 1855, 1885, 1900, and 1906. It stands at 506 Oak St., which is in Avondale, Mt. Auburn, Walnut Hills, and Clifton. The Hamilton County Auditor website lists it as having a total of zero rooms. Thanks, internet.

More dogged and reliable research shows that this neighborhood was once known as Vernonville (the Vernon Manor is right across the street). In 1906, wealthy widow Emilie Hauck Heine spared no expense building a home worthy of her blue blood. When commissioning the mural, however, she either forgot to request a signature, or perhaps paid extra for its absence. We contacted the Cincinnati Preservation Association for assistance, but even they came up empty. Perhaps the artist sensed that his reputation might someday be sullied by the presence of a White Castle around the corner? Just guessing.

Driving east on Central Parkway, approaching Race Street, try looking up and to the left. At the very top of a building, there’s a set of giant antlers! I circled around to make sure I wasn’t hallucinating. I wasn’t. Giant antlers at Central Parkway and Race! Why? —OH DEER

Do not fear that you have stumbled upon the ultimate fate of Bambi’s mother. Such an assumption would betray your blurred perception of fact vs. fiction, along with a profound ignorance of deer physiology. You were driving past an old building—actually a connected pair—that was purchased around 2001 and extensively upgraded by the BDR Design Group. They run their business in most of the space, leasing out the rest.

Oh, right, the antlers. BDR’s President, Bruce Robinson—no prizes for guessing his middle initial—says that the top floor and its rehabbed outer deck were recently converted to residential. The luxury condo’s current occupant, a local attorney, enjoys collecting and displaying eccentric artwork and artifacts, including the large one that overlooks the deck. That would be the antlers. As you have noted, they can also be seen at certain angles from the street below. The Doctor thanks you for not submitting your question as a text while driving.

Right off Peebles Corner near Gilbert and McMillan, there’s a squat little building. “Public Comfort Station” is etched along the top. The doors at either end say “Men” and “Women.” I assume Cincinnati once had several of these pre-Interstate rest stops. When did this one go up, and then shut down? —ENJOY THE GO

Welcome to our first all-architectural column. (Yes, this qualifies; read on.) Long ago, before America’s fast food restaurants let us pretend to be customers, finding an appropriate urban place to relieve oneself was quite the challenge. Cincinnati responded in the early 20th century by building public comfort stations under Fountain Square, in local parks, and at busy intersections like Peebles Corner. The proposal for Fountain Square had a budget “not to exceed $24,781.95.” One wonders what the 95 cents were for.

Famed architect A. Lincoln Fechheimer, creator of many Cincinnati landmarks, designed the Peebles Corner Comfort Station. For some reason, this weighty accomplishment does not appear on his résumé. Designed in 1913, it didn’t get built until 1920, and then promptly closed in 1922 due to lack of funds. It returned in 1926, and survived until at least 1951, when a woman sued the city for $18,500 after slipping on a rubber mat and newspapers city employees used to cover the wet floor. We’re not sure when the final toilet seat was left up on the Men’s side, but the place has been mostly vacant for decades. Lately they say it’s going to be reopened as a bar and restaurant; we hope it’s not more money down the drain.