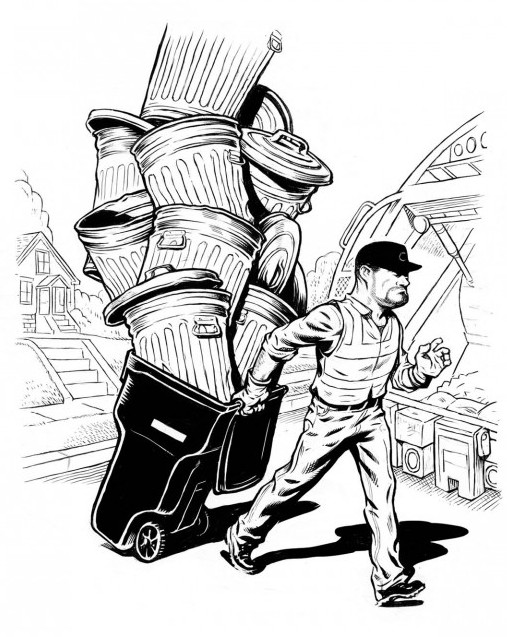 Cincinnati’s new waste regulations have criminalized my trash cans. I will be fined if I drag out anything other than the city’s “approved registered” containers, so how the hell do I get rid of my now-illegal old cans? Will they get collected if I put them out or will I get arrested? —Trash Talk

First, please refer to the city’s new 178-word definition of “dwelling” to determine if your living space is worthy of city-regulated sanitation. You might not even rise to a standard of garbage.

The city’s grace period of hanging bright warning tags on unapproved containers to embarrass them into compliance has passed. To avoid a citation and fine, try this: Place your old trash cans, empty and upside down, beside your official VIP container at the curb. Next, rent one of those big electric flashing-arrow sidewalk signs and point it at the old cans, with the display blinking, “These inverted cans are, in and of themselves, trash. Please remove.”

For more information, call the Department of Public Services at (513) 591-6000. Either your questions will be answered, or the 33 seconds of on-hold music that repeat endlessly will drive you to suicide and settle the matter by default.

In Oakley, behind the Baba India and Sleepy Bee Café restaurants, I drove past a house with several teepees in the front yard—you know, those wood-beam things you see at new construction sites. These teepees were painted, had flowers winding through them, and were surrounded by major gardening. Then I noticed several more houses with their yards decked out exactly the same way! Did a bunch of Oakley neighbors get together and build some kind of outdoor conservatory? —I Brung You Flowers

Back in the 1980s, Oakley’s vacant 20th Century Theater was so neglected that a weed atop its tall marquee grew to the size of a large tree. Perhaps these neighbors have erected a memorial to that embarrassing era?

Well, no. The five homes fanning out from the corner of Brownway and Minot all have a single owner on a horticultural mission. Dan Deters acquired his grandmother’s house in 1980, purchased four adjacent dwellings over time, and now oversees them as family homes for developmentally disabled adults. He built his “Green Trellis Botanical Gardens” on the properties to serve his personal gardening passion and the aesthetic environment of the homes’ residents. Although some of Mr. Deters’ neighbors do not appreciate their block resembling a set from The Lion King, he expects more acceptance as his gardens fill out. After all, this neighborhood once grew a tree on top of a movie theater.

I just moved to Cincinnati from Cleveland, and I like it here except for one thing. Well, actually, many thousands of things: your library shelves. Cincinnati still files books using the antiquated Dewey Decimal system! For decades, American libraries have been dropping Dewey for more efficient and user-friendly systems. When will Cincinnati catch up? —Don’t Dewey Like That

Oh, the infinite varieties of cans of worms your query rips open. For starters, you have erroneously assigned responsibility for our libraries to the City of Cincinnati, when in fact it is Hamilton County’s job. These sovereign governments are highly sensitive about proper jurisdiction, but don’t worry. Eventually you will know, in various situations, which entity has official responsibility for blaming the other about nothing getting done.

Similarly, your brazen comments about library cataloging triggers loud sirens in the community of professional obsessive-compulsives. Universities and mega-large public libraries have mostly sided with the Library of Congress system (LOC), but changes elsewhere are not nearly at the gallop you suggest.

The Doctor made a painstaking phone survey of nine metropolitan libraries in this region and confirmed that: 1) My call was very important to them, except in Louisville, and 2) Although Cleveland uses LOC, all the rest stubbornly cling to Melville Dewey’s brainchild from 1876. It remains by far the most popular system in the world, developed by a man so obsessed with efficiency that he occasionally signed his own name as “Melvil Dui.” If he had stuck with that, America’s library cataloging scheme might have been mistaken for a breathalyzer test: The Dui System!