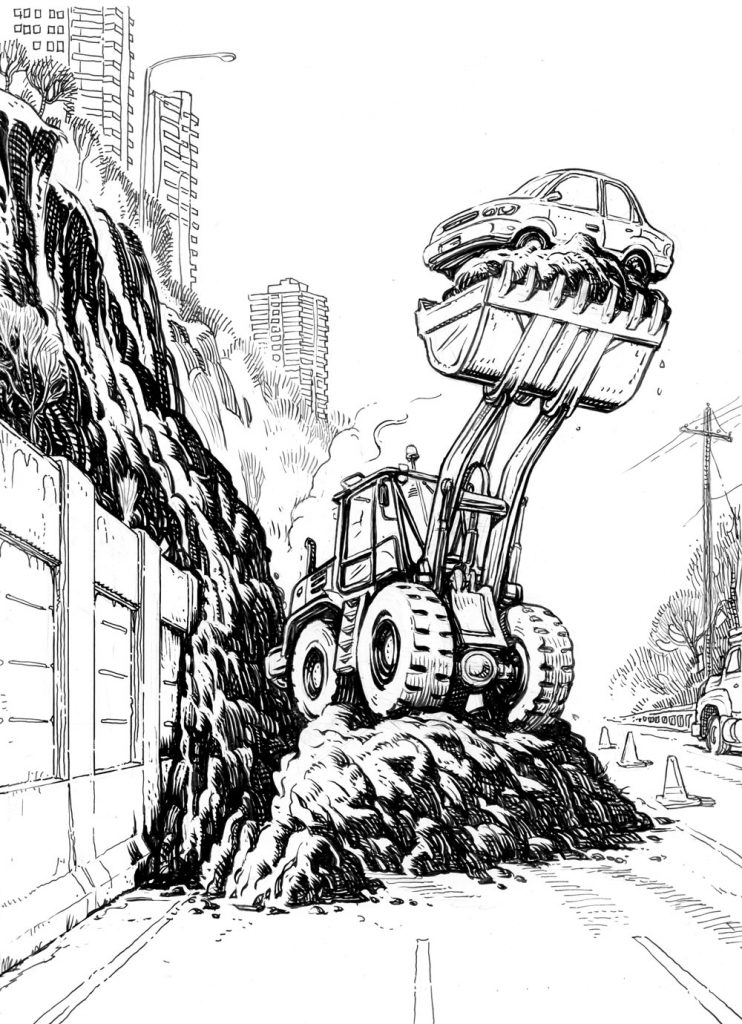 As I was driving past the latest landslide on Columbia Parkway—not really driving, just crawling in a single lane and cursing—I had this thought: Where do they take all the tons of dirt that have fallen? Do they put any of it back or is there a zombie Columbia Parkway somewhere? —WHAT’S THE LATEST DIRT

Dear Dirt:
The City of Cincinnati assured the Doctor that any part of the hill along Columbia Parkway that has deserted its post will be dishonorably discharged, and never allowed to return. If the earth moves, it must move out. This gives us hope that the hillside will someday just plain run out of dirt; problem solved!

In the meantime, we are advised to stop calling the fallen morass dirt. Officially, it begins as land. When it slides, the City waves its magic wand, and presto! It is now construction debris! This allows the ungainly rubble of soil, trees, and stones—and, perhaps, the occasional motor vehicle—to qualify for removal.

Cincinnati currently contracts with H. Hafner & Sons, a venerable landscape supplier, to take delivery of all surprise truckloads. And so, remnants of Columbia Parkway hillsides probably reside in yards all over the area. Let’s raise a glass to these ancestors, or maybe just ceremonially knock over a flowerpot.

Has Fountain Square ever been named Fountain Square officially? I know it began as Probasco Square, and that there have been attempts over the years to rename it. But, putting aside the fact that “Fountain Square” is simply what everybody calls it, does that name exist in any legal sense? —HELLO MY NAME IS

Dear Hello:
Ah, yes, let us honor the beloved landmark that graces Fifth and Vine, right there on Heritage Square. Yes, that opulent display, that magnificent statue of Abraham Lincoln! It instantly makes the whole world think of Cincinnati and the square where it resides: Albert Sabin Plaza.

The above paragraph would need no corrections had various renaming efforts succeeded. In 1871, the old Fifth Street Market first transformed into Probasco Place—no surprise, since the new fountain was on hardware tycoon Henry Probasco’s dime. But people called it Fountain Square before the fountain was even finished. No decree was sent forth; citizens just voted with their mouths.

An actual decree was attempted in 1965 during plans for reconfiguring the entire block. A committee—it’s always a committee—proposed calling the new area “Heritage Square.” This idea employed much the same reasoning as was applied to New Coke. Public reaction was swift and unanimous: “Over your dead bodies.” Other suggestions included naming it Albert Sabin Square after Cincinnati’s famed inventor of the oral polio vaccine (look him up, kids).

And the Abraham Lincoln thing? One of many attempts to remove the fountain altogether included a 1910 plan to replace it with a Lincoln Memorial, using much the same reasoning as was applied to Crystal Pepsi. For the public’s response, see the paragraph above.

Please settle this old local argument: In 1896, when the giant bell at St. Francis de Sales Church was dedicated and rung for the first time, did it actually break windows for blocks around? Some say that’s why the bell has only rung with a smaller hammer ever since. Others say this is a myth. Please investigate. —GOD VIBRATIONS

Dear Vibrations:
Verily, let us test our faith by perusing the St. Francis de Sales Church website. Aha! It tells the bell’s Opening Day story with qualifiers, such as “It is said.” Who said it? Alvin Harlow, author of a 1950 book about Cincinnati history. Harlow’s description of the bell’s inaugural ring is a thinly-veiled metaphor of a wedding night: “The earth trembled. All of Walnut Hills nearly jumped out of its collective skin.” Calling Dr. Freud!

One would expect to see widespread newspaper coverage had such a well-attended event actually climaxed—pardon the expression—with shattered windows. That would have been, quite literally, “breaking news.” And yet the Doctor’s careful rummage through old Enquirers and Posts shows only that “the choir was drowned into silence” upon hearing the bell’s virginal—sorry—ring. So now you know the truth: no glass shattering, only a choir drowning. Understandable, the church website leaving that part out.

New Ways to Get Old