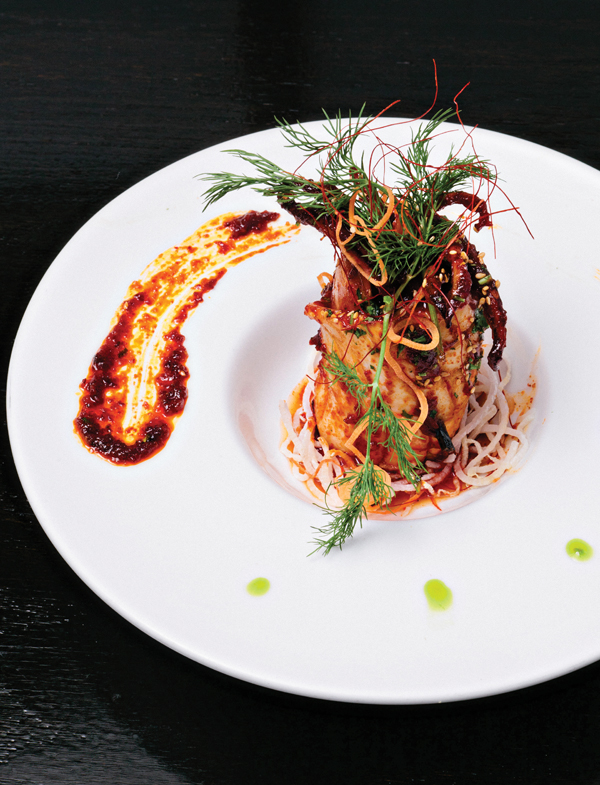 The menu is flush with the greatest hits of Korean cuisine at Sung Korean Bistro—noodles, stir-fries, soups, stews, and grilled dinners. Which makes it inevitable that you, or someone at your table, will eventually get around to ordering the most popular of them all, dolsot bibimbap. While many versions of this famed comfort food collapse into a homogenous porridge, Sung’s hot stone bowl is delivered with so much sizzle that you must wait a couple minutes while it crisps the rice into a slightly scorched crust. No worries. You’ll have the cool and colorful banchan—sides of pickled and fermented vegetables—to devour before distributing the caramelized rice into the hotpot along with layers of spinach leaves, shredded vegetables, meat (or tofu), and then binding it all together with a sunny-side-up egg and a hellish kick of spicy chili bean paste. If Korean barbecue is your thing (and it should be), there is doeji galbi, tender pork ribs basted in a garlicky soy sauce; and for soup lovers, an enormous bowl of dhuk mandu guk, a Korean version of chicken and dumplings. Less appealing are items from the sushi bar, particularly the ill-made nigiri, with stingy fish cuts that would not adhere to the too-soft rice (every piece fell apart when picked up with fingers or chopsticks). The bistro hangs on the western edge of the central business district, which—despite its modern room stage-lit with a warm red glow, full bar (serving an impressive selection of sake), and capable service—may explain why a table is always available.