Wassim Matar circles his dining room with assured ease and a wide smile. A poised emcee, he graciously extends a smooth manicured hand to meet the diners crowding the tables of his eight-month-old restaurant, throwing back his head in hearty laughter when a customer blithely faults the housemade pita bread for his “food baby” waistline. That’s minimizing the bread’s addictive power—the humble pocket is capable of holding even the strictest carbophobe hostage. It is baked to order and delivered hot from oven to table, usually one per person. This is not a parsimonious gesture—there will be more, and you will eventually call for a cease and desist. A small bowl of za’atar-flavored olive oil accompanies it for dipping. Za’atar is a centuries-old herb blend with some solemn credentials by way of the Bible. Like other regional spice blends—curry, for example—its foundation of herbs (usually thyme, oregano, and marjoram), sumac, toasted sesame seeds, and salt varies according to the hand of the cook. The za’atar hits the palate with herby, floral, nutty, and acidic flavors all at once; when it’s drizzled on the warm pita it becomes, well…biblical.

Phoenician Taverna is Wassim Matar’s first turn as a restaurateur, and is an allegiance of sorts to Lebanese Taverna, a Washington, D.C., restaurant that Matar managed through most of the ’90s until he and his family relocated to Cincinnati, where he spent the next 13 years as a stay-at-home father. His restaurant joins the growing league of global eateries in and around Mason, and resides in the same retail strip as another favorite of mine, Sichuan Bistro.

The room is spacious and light with a row of freestanding tables down the center of the long interior. They are sandwiched between a wall of booths on one side and a wine-centric bar and open kitchen on the other.

Though it shouldn’t be, the bright, open kitchen is the most surprising feature, turning the cliché of cramped kitchens in dingy strip-mall restaurants on its head with a line of jacketed cooks ladling warm garlic yogurt over chickpeas and eggplant for fatteh bel bathenjan, or lining up plates of rotisserie chicken on the counter where they await marching orders from a spirited corps of waitstaff dressed in ninja black.

Matar believes the open kitchen provides a confidence that “what you see is what you get,” which he thinks Midwest diners don’t always bring to Lebanese cuisine. It must be working, given the hustle and bustle of most nights, as queues of diners—a large percentage of them Middle Eastern—stand patiently at the entrance waiting upwards of an hour, while more pop in and out to claim carryout orders.

The menu is sizeable and stocked with the traditional ingredients—yogurt, cheese, bulgur wheat, chickpeas, tomatoes, vegetables, lamb, and copious amounts of olive oil and garlic—that contribute both to familiar dishes, as well as to a few not often seen in local Middle Eastern restaurants. Matar refers to his chef, Hassib Alouie (whom Matar had worked with at Lebanese Taverna and snagged after Alouie made a short-lived play for retirement), as “one of the top five chefs in the country” for Lebanese cuisine. “He can debone a whole lamb like I fry an egg,” he says. Mad butchering skills for sure, but Alouie’s got some protean talent too.

The selection of meze (small plates) alone can take up an entire evening. Make that happen. And when you do, skip the fool m’dammas (fava beans with lemon and garlic; surprisingly bland and overmashed), order one of everything else in the hot and cold meze sections, and two of the m’hammara. This is where the warm housemade pita reappears. Be forewarned: stretchy pants are in your immediate future.

With a piece of pita as a utensil, the hummus becomes a smooth canvas of sorts for other salads and meats on the menu (and equally good on its own); the smoky baba ghanoush (roasted eggplant pureed with tahini, yogurt, and the ever present lemon and garlic) an excellent partner to the shankleesh (feta coated in za’atar, topped with diced tomatoes and sumac onions). More bread will appear for the m’hammara, a rich robust dip of ground walnuts, roasted pepper, onion, and spices. While the peppers contribute assertive flavor, the pomegranate reduction adds a pop of tartness, striking a balance between fat (provided by the nuts and oil), acidity, and heat. It’s got some serious wang. By the second order, I’m so pleasantly strung out on the m’hammara I could eat it off my forearm.

Wassim Matar tours the dining room, and eventually alights at our table. He is polite and soft-spoken, quick to smile. He wants his restaurant to feel homelike, so he connects people to the food by telling stories: he was 18 when he moved from Lebanon to the Unites States to attend university; he comes from a family where his mother and maternal grandmother garnered community-wide fame for their feasts; there was a bakery on every corner and fresh bread was always available.

Matar’s objective was to replicate those experiences. He brings more food to the table—kibbeh nayeh (lamb tartare), and tabbouleh—and encourages us to spread the garlic like mayonnaise on the bread (pita, naturally), and then freshly ground lamb seasoned with allspice, cumin, and mint and mixed with crushed bulgur wheat. A few slices of sumac onions top the lamb. He explains that meze is meant to be paired and gestures for us to layer tabbouleh with the baba ghanoush, watching our faces, filling in the conversational gaps with more anecdotes. He’s surprised to hear we have yet to try the fried kibbeh—the little football-shaped bulgur shells that are filled with ground lamb, beef, pine nuts, and almonds. We dip them in yogurt and devour them.
The menu is stocked with more from the Lebanese cuisine hall-of-fame: shawarma (the vertical rotisserie), kebabs, lamb and beef stuffed grape leaves, and falafel patties. And though Matar is clearly aiming higher than a kebab house, a few miss the mark: a grilled lamb loin (sharhat ghanam) that’s overcooked, a fattoush salad of tomatoes, cucumbers, and onions dominated by winter tomatoes that are flavorless and underripe, which even the bright pomegranate sumac dressing cannot save.

The meal ends with a plate of not-too-sweet pistachio and walnut baklava, and a warm cheese tart incrusted with semolina. The cardamom scented coffee is strong and soothes the discomfort from our overindulgence. Food delivered with such fiercely personal regard is difficult to refuse.

Matar has moved on to another table that appears to be fellow Lebanese. He calls for a lamb flatbread to be brought over. They reminisce about the 15-year civil war in their country that was a catalyst for many to take flight, including Matar. But the conversation keeps circling back to food—to mothers and grandmothers, to the recipes passed from one generation to another.

When you consider that Lebanon is roughly the size of Connecticut, the impact of its culinary contributions and the influence of its cuisine on the world is remarkable.

But stretchy pants are recommended. You’ll thank us later. 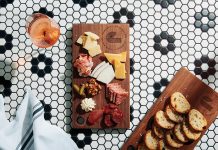 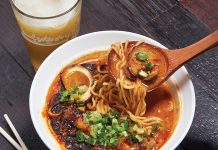 Zundo Shows Us What Ramen Can Be Beyond the Styrofoam Cup