Home Dining Reviews Grape Expectations
It is a cold night in a long unbroken string of cold nights. We pull our coats 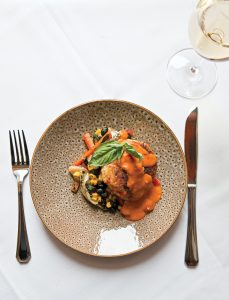 tighter and lean into each other as we deliberately sidestep the icy vestiges of recent winter storms. Snowflakes swirl in the air overhead and glimmer through the lights that illuminate the mid-19th-century quaintness of MainStrasse. Veins of frost reach across the front windows of Bouquet Restaurant & Wine Bar and Otto’s, next door. Charming, like a snow globe village, we decide, lingering for a moment before ducking into Bouquet.

In spite of the deep chill outside, the scene inside the small neighborhood café is warm. Like many of the businesses that line Covington’s Main Street, the 42-seat restaurant still retains glimpses of its old world appeal. At least some of the walnut plank flooring appears to be the original; the exposed brick wall and cast iron pipe add a rustic element to walls painted in sage and sauterne, and windows framed in bronze silk.

Tonight, at tables dressed in double layers of white linen and fresh flowers, a dozen or so customers, wearing the relaxed demeanor of familiarity, briefly glance up. A couple sitting cheek to hand at the bar, another at a table for two in front of a fireplace, groups of threes in various stages of food and conversation. This is their place. Wine is on every table. Glasses are swirled, held up to the light, the nose, the lips. There are approving murmurs as warm olives and cheeses are passed, a stab for the last piece of red velvet cake being shared by a threesome. A server swoops up a black linen napkin dropped on the floor, another stands behind the bar with a wine glass in hand, polishing, polishing, polishing; every few moments holding a glass up to the light for inspection.

Bouquet may be attired in brasserie style, but its heart is pure bistro. The menu reflects the seasons; small plates outnumber large. Preparations are for the most part simple, though some dishes would benefit from one less ingredient, one less step, one less ounce. A small dollop of “tomato gravy” would be better than the two ounces ladled over our crab cake. There’s no reason to hide the chubby cake. It’s quite good: more crab than not, its crust pan-seared with just enough oil instead of falling victim to that cheap and easy flavor thief, a deep fryer. It’s perched atop black bean and corn chutney, with fat shards of Parmesan strewn atop. We like it, but even more so after it’s divested of the extra sauce.

We ask for a wine recommendation to pair with the crab cake. Without hesitation, the server recommends a glass of French white burgundy, Domaine Alain Normand Mâcon La Roche Vineuse, explaining that it’s full bodied enough to stand up to the richness of the crab, but with enough acidity to provide some zing. (In all fairness, I’ve paraphrased his description. Our server doesn’t look like the kind of guy who throws the word zing around so casually.) It’s a good match, both creamy and lively, and it brightens the crab cakes the way a squeeze of lemon enhances seafood.

Bouquet’s wine list is thoughtful, extensive, and easy to navigate. As in most good wine-centric restaurants, it’s meant to appeal to both the novice and expert. The by-the-glass menu changes daily; there are around 30 available (listed by varietal) that range in price from the $5 Protocolo (a fresh and light Spanish blend) to a $15 glass of 2006 Hedges Three Vineyards Red Mountain Washington Red blend (mostly merlot and cabernet sauvignon, with small percentages of both cabernet franc and syrah; it’s a big, plush drink of dark fruit and smoke).

By the glass is the way to go if you’re ordering several plates from the menu and enjoy the synergy of pairing wine and food. If you’re settling in, or just know your way around a bottle or three, Bouquet’s list features 127 wines by the bottle ranging from a $17 Portugese vinho verde to a $145 Henri Billiot Cuvee Laetitia champagne. And hey, big spender, there are 30 more wines on the captain’s list all hovering around $100 (give or take $25), should a ’99 Barolo or small production wine like the 2006 Kamen syrah be your pleasure.

Having an excellent and affordable wine list is one thing, but if you make the leap to put “wine” in the name of your restaurant, that’s a commitment of a different level. Stephen Williams, the 29-year-old owner and chef of Bouquet confesses that his catalyst was a simple one: “I’ve just always liked food and wine together,” he says.

Williams—who has a BFA in photography and first-level sommelier pin—began cooking next door with his friend Paul Weckman, owner and chef of Otto’s. (Williams says their side by side restaurants have a symbiotic relationship, each directing any overflow of diners to the other.) When he discovered he actually liked it, he simultaneously entered Midwest Culinary Institute and Chef Jared Whalen’s kitchen at Pho Paris, and in 2007, he opened Bouquet

His cooking style is rooted in the heartland seasonal: fresh salads (the house salad’s dressing is a delightful, barely there grape-honey vinaigrette) and a daily housemade soup augmented by halibut, salmon, scallops, beef, and lamb.

He offers tofu as a substitute for any of the proteins, and clearly enjoys featuring it on its own. One evening we tried the small plate version, which wears a crisp coat of kataifi (the shredded pastry dough often used in Middle Eastern sweets), and is served with thick rounds of braised ginger carrots and a puree of curried cauliflower. A trickle of lime cilantro oil adds some verve to the cauliflower, and the intersection of crunch and creamy makes for an inspired dish. On another night, we tried the main course interpretation, but it just missed rocking our palates. Topped with blue cheese, the pan-fried tofu slices rested atop a knoll of parsnip puree and were partnered with Brussels sprouts, redskin potatoes, and capers. Where the inventive small plate version required no non-meat disclaimer, the flavors and textures of the large tofu plate reminded me more of the hippie food I cooked at a peace-love-and-Woodstock café a couple of decades ago in a nearby college town. Which is to say: well-meaning and a bit flat.

Williams has a deft hand with dessert; I was seduced by the aforementioned red velvet cake, layered with slender ribbons of cheesecake. With occasional tips from a friend—Palace pastry chef Summer Genetti—Williams recently started making all of Bouquet’s desserts, including a ridiculously good warm apple dumpling (with cold butter rum ice cream, thank you) that would win the approval of a hundred grandmothers. Next time I visit, when I’m not working and can handle another glass of wine, I look forward to pairing this with the 2004 Three Bridges Australian Semillon.

For a food and wine restaurant to be truly integrated, the chef must have a clear vision for the menu, a flexible wine list that guides it (with continuous updates as seasons and menus change), and a tutorial system that supports the staff in selling it. In other words, service staff should make an informed effort to pair wine with food and palates.

While some of Bouquet’s service staff are quite knowledgeable, others—warm and attentive as they can be—falter. A server pointing to “three favorite red wines” as potential partners for Williams’s hearty braised lamb shank is a missed opportunity for both restaurant and customer. It’s a wonderful, robust meal, served with root vegetables (a celery root mash, baby carrots, and parsnip fries) and a red wine demi glace. It needs a robust wine, a bold chewy red like the 2006 Vinum Cellars petite syrah, or the 2007 Plungerhead zinfandel (my dinner guest chose the zin).

The chef should at least provide a cheat sheet for waitstaff. Even knowledgeable servers can falter when the wine list is as varied as this one. Or try these suggestions: Antipasti? The Il Folio Cuvee Rose Prosecco balances out the salt and fat of the cured meats. Not a fan of sparkling? Try the Moobuzz pinot noir. The wicked good filet mignon with bacon, green beans, mushrooms, rosemary potatoes, and black garlic? Try the 2007 Montirius Côtes du Rhône, or better yet, that Bordeaux-style Hedges I mentioned earlier. The syrah will provide some complexity, the tannins cut through the fat, and the bright fruit of cabernet works with the elegance of the cut and not against it.

Whether they’re neophytes or wonks, offering thoughtful pairings provides an opportunity to connect winers and diners to the full experience. That said, we love Bouquet’s unpretentious lo-fi vibe; the combination of heartland comfort and urban cool, the good food and the cozy charm. Whether on a winter’s eve, or for that matter, any.

Atmosphere
Charming neighborhood bistro and wine bar with good food and an excellent wine list. On weekends, Bouquet features wine flights—four two-ounce pours themed by location (such as wines of Galicia, Spain), or style of wine (white pinots, for example). Tuesday through Thursday, look for half-off small plates. Full dinner service is available in the 25-seat enclosed garden patio (with an 11-foot-wide umbrella and round mosaic tables) from April through October.