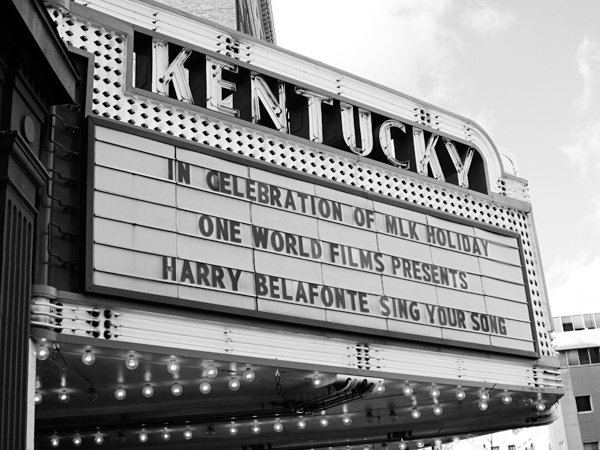 Photographs courtesy of One World Films

So you’re ready to take your passion for film on the road this year. Guess what? You don’t need to travel to Utah to do it. Stick to the Midwest for a year-round schedule of entertaining film festivals (one of which is the nation’s longest-running) that will intrigue the most discerning movie buff.

Kentucky
Weighing in with our favorite fest title is Louisville’s Flyover Film Festival, now in its fifth year and slated for June 11–16. The Flyover concocts a mix of old and new, contemporary and classic, offering some of today’s best indie features, documentaries, and internationally acclaimed hits. Incorporating local talent alongside nationally recognized directors and artists, the Flyover Film Festival homes in on the idea that good art is available—and being created—everywhere.

If you’re up for a last-minute trip, hurry to take in the 15th Annual One World Film Festival in Lexington, through March 14. Established in 1998 as a nonprofit organization, One World came up with a novel gimmick: free film screenings in historic Lexington venues.

Indiana
Indianapolis reigns as the art hub of Indiana and boasts an array of film festivals to prove it. Since 2004, the Indianapolis International Film Festival, or “Indy Film Fest,” held July 18–28, champions the controversial and seeks to challenge dominant perspectives. This “deliciously scrappy, highly focused” festival grows a little more each year, and is independent-minded with an international pull. Another option is Indianapolis’s much-loved Heartland Film Festival, which has expanded to a 10-day event (October 17–26) that caters to filmgoers and artists of all ages and skill levels. Independent filmmaking is at the heart of this festival; create, shoot, and submit your own movie and you stand the chance of winning an award (or a cash prize). Heartland even offers special events for the younger filmmaking population, like a High School Film Competition category.

Covering a spectrum of compelling social topics, Indy’s LGBT Film Festival brings three days of screenings and events to the Indianapolis Museum of Art and Herron School of Art & Design, and is produced each November in collaboration with Indy Pride.

Ohio
The Cleveland International Film Festival (CIFF) takes place April 3–14, and delivers a complete range of contemporary international filmmaking. Started in 1977, CIFF showcases more than 150 feature films and 130 short films (with some 60 countries represented) and has grown to more than 85,000 participants. Categories celebrate everything from women of the world to green-centered films to  Israel and the Jewish diaspora. Add the FilmSlam—geared to high school students—and there’s something for everyone.

For another Ohio film hit, make the trip to the capital in November for a week-long international event. The Columbus Film Council presents the 61st annual Columbus International Film +Video Festival, the longest-running film festival in the United States. Before film festivals were de rigueur, a small group of academics established the CIF + VF to celebrate independent documentaries, which was a cutting-edge decision at the time. This competitive festival now offers 30-40 feature and short film screenings (from up to 800 submissions), as well as workshops led by the pros.

Columbus Film Council Executive Director Susan Halpern describes what sets CIF + VF apart: “We screen films that attendees won’t see anywhere else in the Midwest,” she says. “And we stay in touch with our audience by offering great films year-round.”

Pennsylvania
From March 21 through April 13, Pittsburgh’s Carnegie Mellon University will present and host its International Film Festival (CMU IFF), screening regional premieres of roughly 20 award-winning foreign films. The 2013 theme is “Faces of Media,” which explores the global media and its impact on society.

The CMU IFF is a full-city experience: Catch films at the university as well as various theaters across the city while stopping along the way to sample Pitt’s global cuisine. Experience what’s up-and-coming in student short films and take your festival experience to the next level by participating in discussions with directors, artists, academics, and other industry professionals.

This year, acclaimed directors are signed on to lead Q&A sessions and master classes. One is Scott Hamilton Kennedy, best known for his 2009 Academy Award–nominated film The Garden. Kennedy will be on hand to promote his latest film, Fame High, which follows Los Angeles County High School for the Arts students who want to fulfill their dreams of hitting the big time.