Whether on two wheels (which you can rent there) or four, the best way to explore is simply to wind your way around the outer roads and cut across the rural, woodsy interior to the opposite coast. Just southwest of the peninsula’s point, Ellison Bluff State Natural Area offers an expansive bay view and hiking trails. A bit further up the road, the Washington Island Ferry takes you across the county namesake Death’s Door passage to the beaches and dunes of Washington Island—and from Memorial Day through mid-October, to vehicle-free, 912-acre Rock Island State Park. Over on the eastern shore, make your way to the Cana Island Lighthouse—the oldest in operation in the state—and climb the 97 cast-iron steps up to its original 1869 lens, which still emits light 18 miles out onto Lake Michigan. Further south, wade through the shallow areas of Cave Point County Park, then climb back up top to watch waves crash against the craggy limestone cliffs carved over the eons. 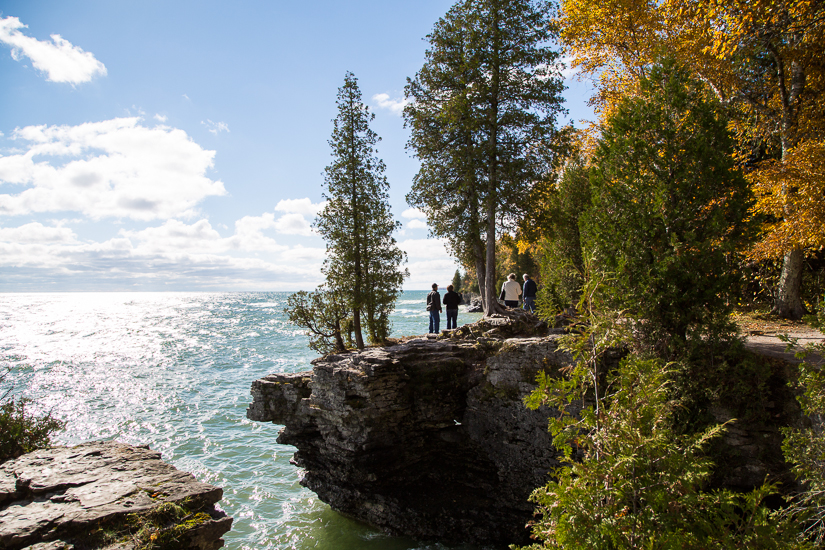 You’re surrounded by water; there’s no sense in going thirsty. Instead, go tasting. Island Orchard Cider in Ellison Bay makes dry—not sweet—French-style sparkling hard cider from their 2,100 apple and pear trees on Washington Island. Over in Baileys Harbor, Door County Brewing Company names its beers in homage to local icons, and Stone’s Throw Winery—one of several area vineyards—ships in premium California grapes to ferment small-tank fine wines that they serve alongside a menu of Italian tapas. Wild Tomato uses fresh, local ingredients to wood-fire a mean pizza, which you can eat on their large outdoor patio in Fish Creek. In Ephraim, Leroy’s Water Street Coffee is cozy, eclectic, and the only way to caffeinate. Around the corner, Czarnuszka Soup Bar seems straight out of Seinfeld, sans the yelling—though the soup, which changes daily, is good enough that wouldn’t even matter.

By the Bay
B&Bs, inns, hotels, and home-rentals abound. Our best advice? Stay in Ephraim, a charming historic village right on the bay.