Home Perspectives The Urge to Purge 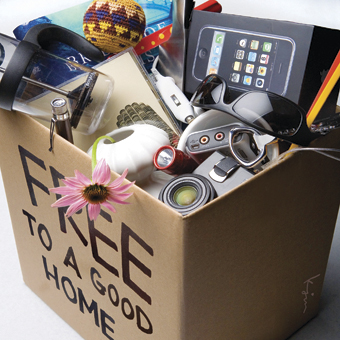 A few months back, I accompanied my friend Nancy to her storage unit in Mt. Healthy. She should have posted a warning sign. As the door rose on the single-car-garage-sized space, my neck muscles tensed up. It seemed very likely that I was about to get hit in the head by a falling chair, a box of Christmas ornaments, or a kid’s plastic kitchen set, complete with faux microwave oven. The unit was packed with more junk than the Joads’ jalopy in The Grapes of Wrath. Standing before Nancy’s mound o’ miscellany, my heart raced and my palms grew moist. We were there not to cull items, but to add a few more, which didn’t look possible, though Nancy somehow managed to pull it off. She just wanted to dump the stuff and run. I wanted to stay and organize the contents, or better still, set the entire unit on fire and end my torture. I have a strong aversion to excessive amounts of stuff, my own and others. These days, however, everyone’s stuff seems to multiply faster than underage celebrities. So my heart keeps racing and my palms keep sweating.
I can’t recall exactly when my aversion to excessive stuff and clutter first took shape, but it was definitely in adulthood. As a kid, I would have gladly accepted tons more stuff, especially if it was emblazoned with images of sultry tigresses like Farrah Fawcett or Cheryl Tiegs. As an adult, things are different. I could tell you that I made an ethical decision to live more lightly on Mother Earth, to use only what I truly needed, saving resources for others, particularly the poor in developing nations. But that would be a lie. Too much stuff just irritates me to no end. I’m not sure why. I find it horribly distracting, too. It’s hard for me to do whatever I should be doing if a bunch of stuff I don’t want is lying around taunting me, crowding me, asking to be freed.

You may think that I would self-medicate my condition by simply buying less stuff. But no; I buy lots of stuff. I’m a sucker for new gadgets and silly toys, like those punching nun puppets. I can hardly get through the grocery store checkout lane without buying a tube of Super Glue or a pocket-sized lint roller—you know, just in case. Ironically, I work for a local ad agency called Barefoot, which is now part of a global agency called BBDO. I spend the better part of my days trying to invent clever ways to convince people to buy things. And I don’t mind doing that in the least. In fact, I love it. Buying stuff is our God-given American right, damn it.

So how do I, an avowed and utterly conspicuous consumer, manage my clutter allergies? By regularly purging my life of stuff as if I were preparing to enter a monastery. For the past 10 years or so, I have made regular trips to the Freestore Foodbank, as well as those metallic collection bins scattered throughout the city that supply a host of nonprofits with wares to sell. While I am glad to help the poor, the truth is I donate the stuff as much for my own benefit as anyone’s. And I don’t typically ask for receipts or even make note of what I donate for tax purposes. I’m so overjoyed when I free myself of stuff that I’d pay the government for the privilege, if that’s what it took.

I’m often asked why I don’t sell my stuff, most of which is in good to excellent condition. It’s a fair question, and yes, the idea has crossed my mind. But my aversion to clutter is matched by a nearly equal aversion to planning things like garage sales and dealing with people I don’t know.

Several of my friends hold twice-yearly garage or street sales, and planning each one takes months. Not only do they have to gather up all their unwanted stuff, but they have to determine what to sell each item for, prepare newspaper ads and flyers, and contact all their friends to encourage them to come. All of this can add up to dozens of hours, and let’s not forget about the time spent praying for fair weather, and then monitoring the local weather channel to see if those prayers will be answered. When the fateful weekend finally arrives, they spend all day Saturday and Sunday keeping a watchful eye on the goods, and battling over every bloody one with garage sale maniacs who consider themselves negotiators on par with the FBI’s best.

You think I’m exaggerating? Once while visiting with my friend Betty during one of her garage sales, I overheard this exchange between her and a customer, a woman in her mid-sixties who drove a pick-up truck already brimming with stuff bought from other garage sales that day.

“How much for these books?” the woman asked, pointing to a cardboard box full of paperbacks whose pages had taken on a jaundiced glow with age.

“For the whole box?

“OK, I’ll give you half of what you’re asking: one dollar.”

“Well, if there’s 20 books and they cost 20 cents apiece, then the cost would be four dollars, which means half price would be two dollars.”

Perhaps feeling she was getting bamboozled, the customer asked to use the calculator Betty had next to her cash box. “Let’s see, 20 books times 20 cents apiece equals”—pause—“forty dollars!” A heavy look of confusion ran over the woman’s face.

“No, it’s four dollars for all of them,” Betty said, “but I’ll take half the price: two dollars.”

“That’s good because unless these are rare books, no one would pay $40 for them,” the woman said. Then she paused again, perhaps imagining herself on Antiques Roadshow explaining how it was that she came upon a mint-condition, first edition volume of The Adventures of Huckleberry Finn. “Or are they rare books?”

“No, they’re not. But would you like all of them for two dollars?”

“The whole box is four dollars. Half would be two dollars, not one.”

“Can I use your calculator again?”

“Deal,” the customer said. And just in time, too, since I was ready to offer $20 just to end this silly haggle over what amounted to fireplace kindling.

I witnessed at least a half dozen other intense negotiations in the 30 minutes I was at Betty’s garage sale. Such mind-numbing dickering, during which you have to keep a smile on your face, is another unseen garage sale cost, and a pricey one at that. It taxes your soul. Betty e-mailed me several days later to announce, rather triumphantly, that her weekend take was $180. I used my calculator and figured that when you factor in all the time spent preparing for the garage sale, working it, and cleaning up after it’s through, Betty made about $4.05 an hour. And that doesn’t account for the vast number of brain cells lost.

Garage sales aren’t the only means to get rid of unwanted stuff, of course. Nowadays we have the digital flea market: eBay. Selling stuff online is less strenuous than the garage sale approach, but it’s not without its own frustrations. You have to contend with the hassle of shipping your goods to those lucky enough to have made the winning bid on, say, your polka-dotted umbrella stroller that still “looks like new” even though it smells like 10-year-old baby spit-up.

My pal Nancy says that she intends to sell most of what’s in her storage unit on eBay—someday. It’s been nearly two years, and she has yet to register, let alone sell, a single thing on eBay. Given the $100-plus monthly storage unit fee, she would now have to sell everything for about twice its original retail value, something not apt to happen among eBay’s legions of experienced and relentless bargain hunters.

As far as I’m concerned, it’s much easier to give stuff away than to sell it. When I’m not donating my stuff to nonprofits, I’m giving it away to friends and colleagues. Every few months, I bring in stuff I no longer want and lay it out on the company’s kitchen table with a Post-it Note that announces, “Free for the taking. Love, Steve.” (Or words to that effect.) I’ve brought in books, kitchen items, artwork, camping supplies, and toys—all stuff that I’ve grown tired of looking at or wonder why I bought in the first place. “Are you sure you want to give this away?” my colleagues almost always ask after selecting a free item. “You better believe it; it’s all yours,” I say.

Newer colleagues are initially suspicious, thinking that my eagerness to unload stuff can only mean that something must be wrong with it or me, like maybe I’ve laced it with anthrax. But it doesn’t take them long to realize that my stuff is of the finest quality, and that I benefit from giving it away as much as they benefit from the free board game or new set of wine glasses.

I’ve even given animals away. And before you animal rights types e-mail me, understand that I found good adoptive homes. One colleague helped ease my anxieties by making my two parakeets, Siegfried and Roy, disappear from my life. Another friend adopted my chinchilla, Drew. Actually, it was my daughter Gracie’s chinchilla, which she had grown tired of playing with, or at least caring for. Perhaps she has inherited my short-term interest in shiny (and furry) new things.

Whatever my friends and family members may secretly think about my own personal potlatch, I will continue down the buy-it-then-dump-it path. In fact, I have a white, wooden rocking chair (still in the box!) that needs a good home. E-mail me if you’re interested.

Illustration by Kevin Miyazaki/Redux
Originally published in the September 2008 issue.