Home Perspectives The Tao of Steve 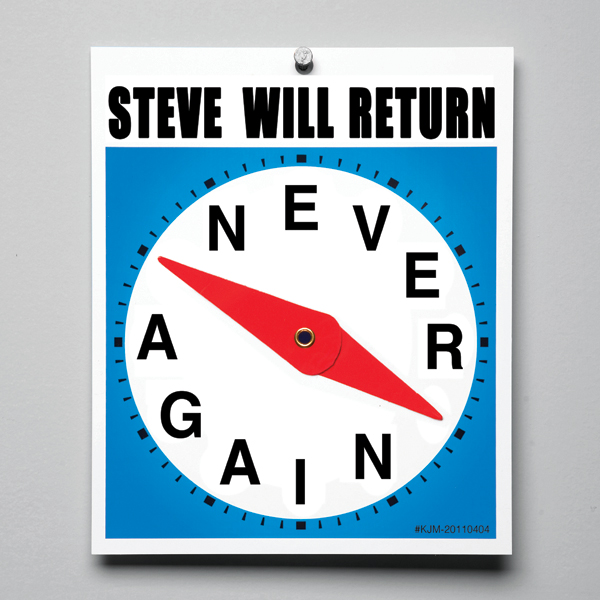 Winners never quit, and quitters never win. So said Vince Lombardi, anyway. It’s a tidy adage that may resonate in the locker room at halftime, but not, I would argue, in the broader arena of life. Often, quitting is exactly the thing to do, even in sports. I should know. I have bailed on a lot of things over my 40-plus years, sports included, and I couldn’t be happier. In fact, I contend that quitting has made a winner of me. And it can do the same for you, too.

In my opinion, the best thing to quit—with the possible exception of chewing tobacco—is a job. Assuming, of course, that you have another gig lined up (or that you’re independently wealthy), quitting jobs is a blast. In high school, I quit my job at McDonald’s after just two days. That was enough time behind the counter squirting ketchup and mustard on top of hamburgers, while simultaneously deep-frying fish patties, to figure out that I’d rather do just about anything else. I even took a job at a small business on Main Street that included killing rats that made their way into the store from the back alley. I may be doing battle with rats, I reasoned, but at least I don’t have to wear that dorky McDonald’s uniform with the even dorkier paper hat. Eventually, quitting both of those jobs freed me up to help man the concession stands at Elder High School’s football, soccer, and basketball games. Slinging soda and soft pretzels at the games wasn’t working so much as socializing. And this quitter scored some points of his own providing free refills to friends.

As an adult, I’ve quit five or six jobs, each one leading to something better. There’s something very empowering about telling someone to “take this job and shove it.” Or, ahem, words to that effect. I suppose that’s because many of us—at one time or another, and to one degree or another—have felt constrained, unappreciated, even abused by a job and its unique set of circumstances. Also, given that we spend the bulk of our waking hours on the clock, quitting one gig for another is a fabulous way to remind ourselves that we, not our employer, are the masters of our own destinies (though some spouses and a variety of mortgage companies may beg to differ).

Quitting a job is particularly rewarding when you’re leaving not only for greener pastures but to distance yourself from an abusive, psychotic, or deranged boss. I once reported to a guy who considered it a blessing of yours to have the good fortune to work for him. He liked to remind you how smart he was and, by implication, how dumb you were. Turns out he was a very bright guy, but only in some ways. When it came to interpersonal behavior, he had all the grace and self-awareness of a 12-year-old boy at his first mixer. And that was on his better days.

When I told him that I was leaving the company, he was floored. He assumed that I had a terminal disease. As he saw it, you could not possibly be idiotic enough to forgo the chance to warm yourself in the glow of his nearly divine aura unless you were going off to die. Even if I were leaving to work at the right hand of Steve Jobs it would have still confounded my boss, who thought himself not a demigod but, yea verily, a god. Whenever I need a little pick-me-up, I replay that resignation in my mind and smile. Big. In part because my next job not only paid more, but the guy I reported to was even smarter than the god-man, and actually benevolent.

One of my most stunning “quits” happened in high school. I was a champion cross-country runner at Elder, winning both the freshman and reserve Greater Cincinnati League championships, the latter by an 11-second margin. Neither victory was a total surprise because I had been training since sixth grade, running as much as 50 miles a week before I even arrived at Elder in the fall of 1978. Despite thousands of miles run in the hopes of one day contributing to a state championship for the Purple Panthers, I quit the team several weeks after my reserve league victory. Coach Lombardi, or at least his spirt, was disgusted, I am sure.

I actually quit the team twice, first telling the then-assistant principal and team chaplain, Father Thomas Kuhn, and then my coach, Steve Spencer. They were both shocked. While no one predicted the Olympics were in my future, I was certainly a contender on the local and state levels. Besides, sports rule in high school, and here I was, the captain of the reserve squad, quitting weeks after our championship season. I could practically see the thought bubbles rising above their heads (even Fr. Kuhn’s): WTH! My teammates were also shocked. Was I hurt? No. Did I want to try a different sport, like swimming? Nope. There were a host of reasons why I quit but the biggest was that I wanted to get more involved in my parish youth group and the Catholic Youth Organization. I began hanging out with guys and (mostly) girls from around the city, planning retreats, dances, and youth conventions. This meant an end to running around Price Hill with other skinny dudes in tube socks, but it signaled the dawning of a new era—one mostly spent staring at girls in tube tops. It was a definite extracurricular upgrade.

And yet, of the many things I have quit, one stands out above them all. In fact, I don’t expect any other future “quit” to even come close to matching the personal satisfaction and growth that this one continues to deliver. Which is why I’ve become a somewhat passionate advocate for quitting religion. That’s right, religion. I realize this will shock and even offend some of you. Reader mail quadrupled after I wrote about losing my religion in this very column three years ago. Let me tell you, hell hath no fury quite like religious nuts confronted with nonreligious nuts like me.

To be fair, many of those who wrote me were sympathetic to my position, but I also heard from more than a few true believers who were not. In their view, to say “no” to religion is akin to denying that two plus two equals four. So convinced are they that the Bible (or whatever holy book they claim) is not only right but painfully clear and self-evidently true, they get totally flummoxed when someone chooses not to take the Kierkegaardian leap of faith alongside them. And what drives them even battier is when someone—like me—makes the leap and then, after having a good, long look around, chooses to leap back to the squishier ground of atheism, where it’s more comfortable to lie back and count the stars and ponder the meaning of life.

I get the believers’ disbelief in religion-quitters like myself. Hearing someone say that they dumped your religion is sort of like hearing someone say they dumped your daughter, son, or best friend. It’s hard to grasp why anyone could possibly see anything less than fabulous in someone—or something—you adore and have invested so much of yourself in. But because it also quietly calls into question your own judgment, your own ability to see the world as it truly is, the act of quitting it is subtly, yet powerfully, threatening. Maybe that’s why no one likes a quitter.

I have nothing against religion, per se. If it works for you, as it apparently does for billions of people, then knock yourself out. While I have left this part of my life behind, I believe there is a lot of beauty, poetry, and truth in the Catholic Church. But that doesn’t mean the church is right about everything, even when it comes to such fundamental theological underpinnings as the divinity of Christ or the concept that the communion wafer really becomes, at the priest’s blessing, the literal flesh of God. Transubstantiation is a beautiful—albeit odd, and when you think about it, sort of disgusting—bit of dogma, but one I no longer choose to swallow.

Some suggest that quitting religion is certain to make the ultimate loser of me, roasting me in hell through all eternity with mass murderers like Pol Pot, scammers like Bernie Madoff, and other religion quitters like Bill Maher. Thing is, I don’t believe in hell, either. I’ve quit that, too! Having given the heave-ho to both heaven and hell, I’m much happier. Somehow, the world makes more sense to me without a God (and without a Satan, too), and that clarity helps me get through the day, particularly when absorbing the (mostly bad) news. For thousands of years the brightest minds have tried to reconcile the suffering of innocent people with a caring, loving God. The attempts have been impressive and certainly genuine, but in my estimation they come up short in every case. Rather than embrace all the excuses made for God and why it appears He gave up on us, I chose to give up on Him.

Without religion, I’m free of the burden of reconciling all the great faiths while still having to choose one over the others—or worse, while having to explain why all religions are “good” but mine is, well, clearly superior. I find the arguments people make for why theirs is the one true religion and everyone else’s is second-class, if not downright evil, unconvincing. And sort of silly. It reminds me of two people arguing over which dog breed is better; they each behave politely but clearly think the other is completely insane.

There’s something liberating about having to accept the fact that we don’t know a damn thing about what, if anything, happens after we die, despite the competing claims from competing holy men and their holy books. The upside, then, is that when we quit life, or life quits us, we’ll be surprised—assuming, of course, that we’re conscious of anything.

So, while I’m still conscious, I just wanted to tell you that this is my final Odd Man Out column. After nearly six years of sharing my perspective, such as it is, on matters ranging from the quirky (my peculiar appetite) to the mundane (my love of camping) and the farcical (my foot-in-mouth syndrome) to the monumental (my curiosity about our shared destiny and fate), I’ve decided to call it quits. Whether you’re reading this column for the first time or you’re a regular follower, I thank you. A writer without readers is a writer unfulfilled.

My byline will still appear now and then in this magazine and on its website, as I take on a new, yet-to-be defined role. Whatever it may be, I’m already looking forward to quitting.

Photograph by Kevin Miyazaki
Originally published in the May 2011 issue.