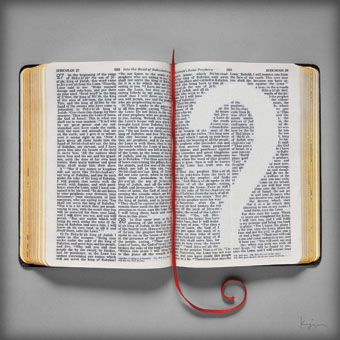 When I was a child, my mom’s favorite TV program was The Phil Donahue Show. This was during the late ’60s and early ’70s, back before Donahue became a national celebrity and his show was still broadcast from Dayton. I typically didn’t pay much attention to the show, but one day, perhaps out of boredom, I sat down next to mom and watched. Only a few TV programs have stayed with me the way that day’s Donahue did. His guest captivated and frightened me. In my very parochial, Catholic world, this person was the most pathetic, despicable, and horrendous kind of human being one could ever encounter: an atheist. It was Madalyn Murray O’Hair, founder of the American Atheists organization (AA). The fact that someone would publicly snub God amazed and dumbfounded me. Though just a kid, even I knew that only a moron would dare question God’s existence and, in so doing, risk His wrath. Now, some 30 years later, I have become that moron. Much to my own surprise, I find myself a devout agnostic, one who may soon join the AA. Here’s why.

I have a fantastic life. If I tried, I might be able to convince you that my life has been one cross to bear after another. I’ve had to endure childhood disease, divorce, a Barry Manilow concert, and other not-so-fun chapters. But at the end of the day, I don’t have much, if anything, to complain about. I’ve never missed a meal. I’ve never had to go without shoes on my feet or a roof over my head. I have a smart, loving wife, and two terrific, well-behaved kids. I appear to be in good health. I make a good living and enjoy my job. My hobbies and interests challenge and fulfill me. By anyone’s standards, this adds up to more than just a good life, it’s a great one.

So, yes, I feel blessed, but I don’t believe I actually am. That would require a God to do the blessing. And to believe that would also mean believing that God has specifically chosen some people not to be blessed, but rather to suffer in abject poverty, rotten health, or something nearly as rough, such as going through life without seeing a single episode of Dancing With the Stars.

There have been countless books and essays written on the alleged spiritual growth that poverty and pain can inspire. I’ve read some of those books. That sort of “what-does-kill-you-makes-you-stronger” philosophy may be comforting to read when you’re poor or in pain, but that doesn’t mean it’s true. The way I see it, millions of innocent people starving to death while millions of others enjoy a gluttonous lifestyle can’t be reconciled with a benevolent God no matter how elaborate your theological argument. Yes, the rich can and should help the poor but that still doesn’t explain why a loving, all-powerful God would allow so many to suffer. Because the rich aren’t being generous enough nor the powerful sympathetic enough? It’s like punishing one child for the bad behavior of another. Does that make sense?

I dig Jesus. In the words of Jackson Browne, I’m a “pagan on the side of the rebel Jesus.” Jesus was a real bad-ass: challenging authorities, busting up vendor tables in the synagogue, hanging with whores and other ne’er-do-wells. He was, in essence, a forerunner of today’s outlaw bikers, the bearded men with beer’ded guts who challenge the police, bust up pool tables, and hang out with fast women and troublemakers. Minus the crystal meth. Of course, Jesus was also a really smart, sensitive guy: feeding the hungry, encouraging the downtrodden, and telling excellent stories, like the one about the prodigal son. What’s not to admire about someone who espoused turning the other cheek, loving your neighbor as yourself, and always having ample supplies of alcohol at weddings and other celebrations?

But it’s a giant metaphysical leap from Jesus the amazing, charming person with incredible storytelling talents and a heart particularly attuned to justice to Jesus the “Son of God.” (Which reminds me, what’s up with all those biblical stories in which fathers deliberately hurt or kill their own children?) There are countless ways in which God could have chosen to engage with us, so why did he choose to send his only son on a mission predestined to end in crucifixion? This is God we’re talking about it! He could have handled this differently—meaning, in a less weird and more humane way—don’t you think? OK, I know: I am merely human and my mind is not deep enough to know the virtually unknowable. But bear with me as I spin a kinder, gentler scenario: If God so loved the world, why couldn’t He just let us know by floating as an image in the sky each morning—think of Him as a much bigger, ever-present, cosmo-angelic advertising blimp—reminding every one of us in our native tongues that he loves us and expects us to love others? Whether you acknowledged the Creator before your morning cup of coffee or not, you would still have the freedom to act badly if you wanted, and pay the consequences for doing so later.

I’m opposed to violence. If you get the itch for some good ol’ fashioned ass-kicking, you need not dust off your Die Hard DVD or tune in to Ultimate Fighting Championship. Just read the Bible. There’s enough ethnic cleansing within its pages to make Saddam Hussein blush. Dubious? Check out Exodus, Numbers, and Deuteronomy. The violence isn’t limited to the Old Testament, either. In the newer material, we hear of coming fires, plagues, and other disasters that will kill all of us nonbelievers. Apparently nothing represents pure goodness and unconditional love quite like a God with an interest in the smell of burning flesh.

Does anyone really believe that a sane, benign God endorsed or instigated the evil actions and horrific predictions in the Bible? We all know that a few nuts do believe this. But we also know that most of us believe that the Bible is not to be taken literally, at least not in its entirety. And that means that we need to use our own noggins and sense of fairness to determine what is to be ignored as sheer idiocy (perhaps the prohibition of wearing clothes of mixed materials, Deuteronomy 22:11) and what is to be embraced as good and wise (perhaps the suggestion that if you forgive others, you are more likely to be forgiven yourself, Mark 11:25). Based on all the gratuitous violence and the rampant endorsement of immoral behavior in the Bible by numerous contributors, the manual God supposedly gave us appears flawed. Perhaps God needed an editor but was too embarrassed to admit He needed one? It is hard to admit you need help, but it must be a lot harder if your resume includes creating the cosmos. Still, we shouldn’t be left scratching our heads over God’s moral code as if it were arcane instructions on how to install a piece of software.

It seems to me that if you believe God is pulling all the levers, there’s no reason to wear a seatbelt. If you end up in a crash, then you will either fly through the windshield and slide along the pavement, as God wants, or you’ll somehow manage to stay within the car, at which point you will safely step out of the vehicle or be pinned by the steering wheel and burnt to a crisp—whatever God has decided is best for you. By this logic, I believe believers should rip out their seatbelts and truly put their lives in God’s hands. I, on the other hand, will continue to buckle up, thank you very much.

I don’t hear voices. I personally know more than a handful of people who claim that they talk to God. Not pray to God (though they do that too, I’m sure), but actually have a two-way conversation with the creator of the universe. Why doesn’t God talk to me? Why hasn’t he given me some advice or encouragement, or better still, a hot tip on a trifecta at River Downs?

One of the people who claims to talk to God is President George W. Bush. If that’s true, then the President must not be listening very well. Wouldn’t God have set him straight on the whole Iraq and WMD screw-up? Wouldn’t an all-merciful God take pity on the President and help him with his diction? To paraphrase author Sam Harris: If President Bush claimed to talk to God every morning through his hair dryer, we would run him out of office. But in the big picture, what does taking the hair dryer out of the equation have to do with it? My point exactly!

I AM NOT trying to convince anyone to abandon his or her faith. I believe you are free to believe what you want as long as it doesn’t infringe on my freedoms. If you think I am the spawn of Satan for expressing my agnosticism, send me an e-mail. (But first you should know that I don’t believe in Satan, either.) Of course, you could choose instead to pray for this “pagan on the side of the rebel Jesus.” But if I were you, I wouldn’t waste your time.