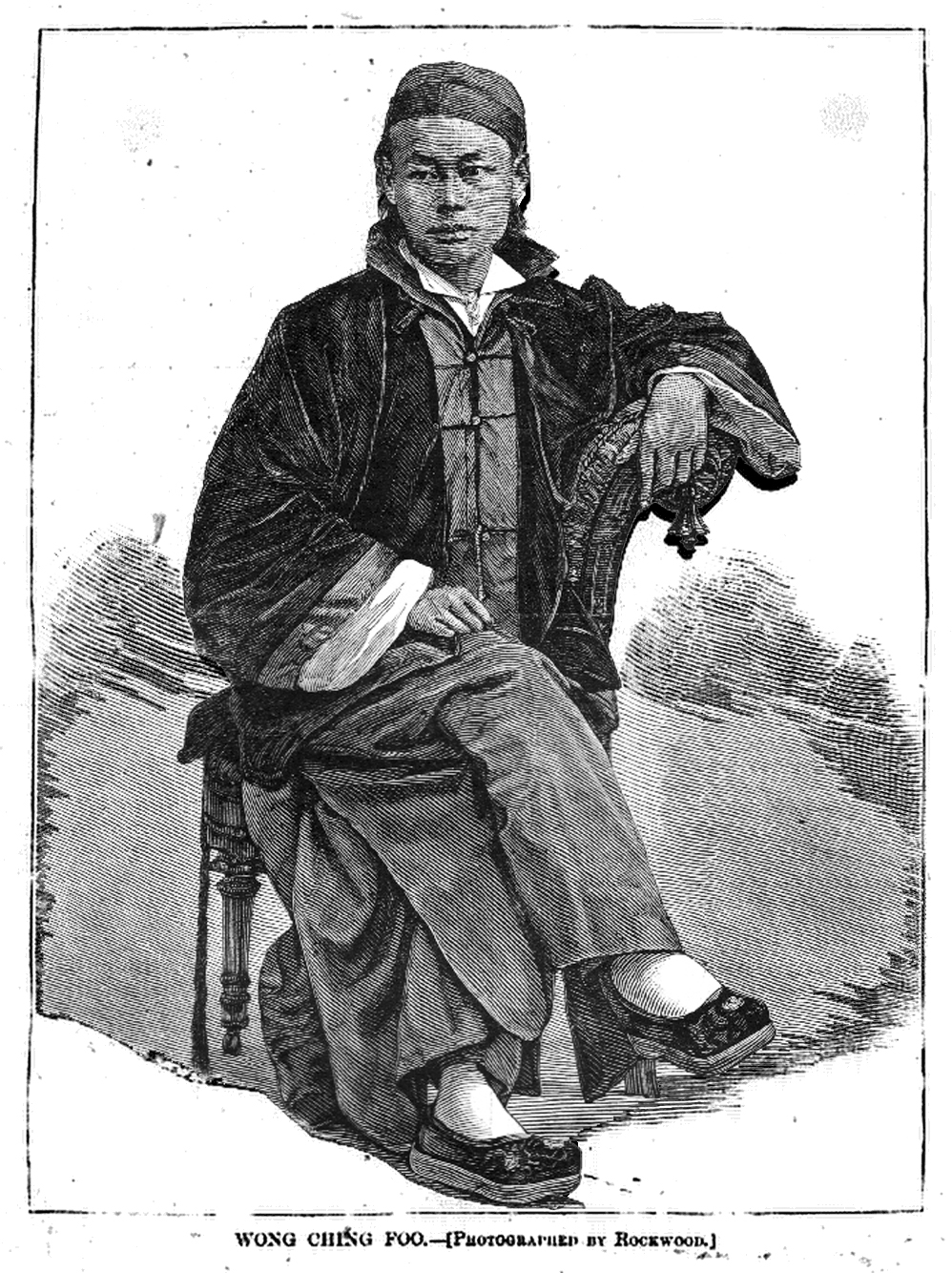 A small audience – reports say no more than 50 people – turned out on the evening of Sunday, 8 January 1882, to hear Wong Chin Foo at Cincinnati’s Melodeon Hall. That venue, almost opposite the Mercantile Library on Walnut near Fourth, was regularly filled with thousands of listeners for visiting orators.

Wong Chin Foo was certainly the most famous Chinese lecturer in America at that time. He was also among the more controversial debaters of the day. Those Cincinnatians who did show up at the Melodeon heard a presentation titled “Man’s Religion In China and God’s Religion In America Compared.” The only newspaper to cover the talk, the Cincinnati Gazette [9 January 1882], spent more time describing Wong Chin Foo’s costume than the man himself:

“The lecturer is a good looking man of about thirty, and would be a fluent speaker were his mastery of English more complete. He wore a long black woolen gown, lined with sky blue satin, and a black silk cap. A long gold chain was hung around his neck, and before he began speaking he took off an outside jacket of brown brocade, lined, like his gown, with blue satin.” 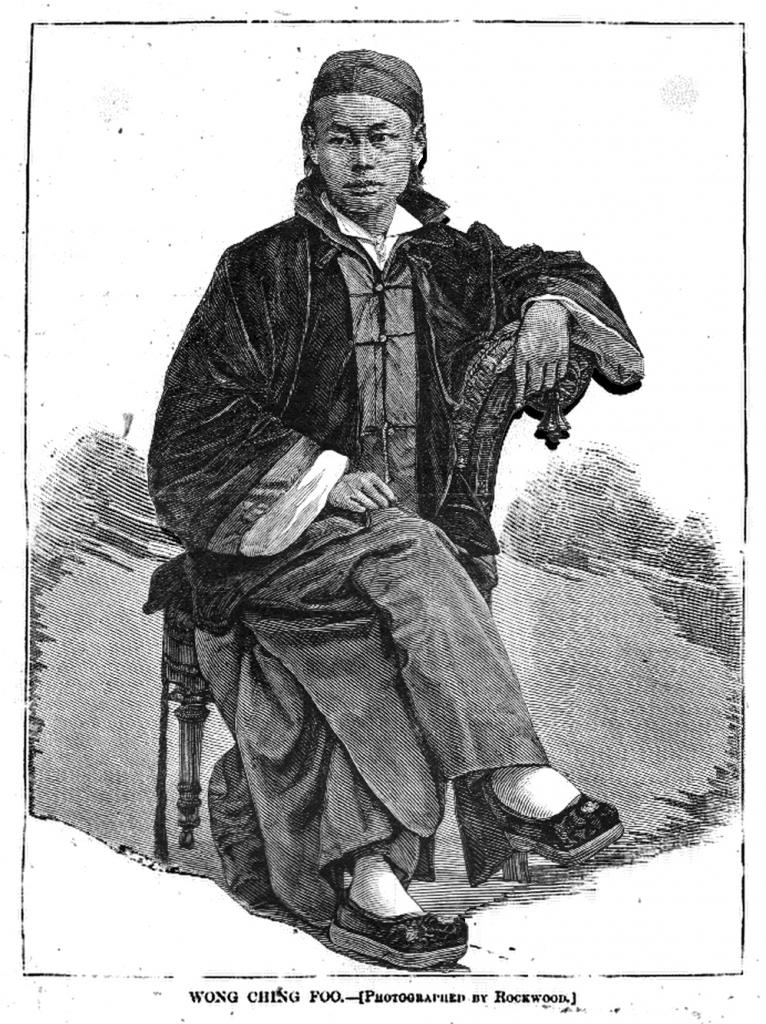 Mr. Wong spent a fair portion of his talk comparing Christianity to the Confucian culture of China, but his major message was aimed at dispelling American myths about China and the Chinese. Wong explained that his countrymen did not eat rats, were not idolaters, did not kill female infants and were willing to adopt modern technology – but on their own terms. Most emphatically, Wong said, China did not need Christianity.

After years of lecturing across America, Wong summarized his arguments in a provocative essay published in the North American Review (August 1887):

“Christians are continually fussing about religion; they build great churches and make long prayers; and yet there is more wickedness in the neighborhood of a single church district of one thousand people in New York than among one million heathen, churchless and unsermonized. Christian talk is long and loud about how to be good and to act charitably. It is all charity, and no fraternity – ‘there, dog, take your crust and be thankful!’ And is it, therefore, any wonder there is more heart-breaking and suicides in the single State of New York in a year than in all China?”

Wong’s anti-Christian message gained him a lot of attention across America, and lots of paying customers (outside of Cincinnati) for his lectures, but he also aggravated some very dangerous enemies. Many of the Chinese living in the United States in the 1880s had converted to Christianity and had found passage to this country under the auspices of missionary organizations. Wong’s worst enemies were his fellow Chinese immigrants.

It was not unusual for Wong Chin Foo to find himself in court on his travels, facing trumped up charges pressed by Christian Chinese. That is exactly what happened in Cincinnati. A dispute over a printing bill arose among Wong, his host, and some Christian Chinese in town. The matter was trivial and a judge dismissed the case. As the Gazette [3 February 1882] related:

“The Court said both gentlemen were men of intelligence, and the war is one of intellect.”

Wong Chin Foo departed the Midwest and relocated to New York, where he founded a newspaper called “The Chinese American” and spent the next 15 years lobbying for civil rights for his fellow Chinese immigrants. The name of his newspaper is believed to be the first use of the term, “Chinese-American.”

Wong was born in China in 1847 and came to the United States to study, sponsored by a Christian missionary. He attended classes at George Washington University and Bucknell University, but became disenchanted with Western culture and returned to China, where he married and fathered a son. In the early 1870s, he tried to organize a rebellion against the Qing Dynasty and was forced to flee back to America. He earned United States citizenship in 1874.

In 1882, the same year Wong had his troubles in Cincinnati, the United States passed the Chinese Exclusion Act. Although the law was intended only to prohibit the importation of unskilled laborers, American immigration authorities used a broad interpretation of the law to ban and deport all Chinese, even students and businessmen. Wong, a naturalized citizen, was refused a U.S. passport because he had been born in China.

In his efforts to build support for his countrymen and his culture, Wong Chin Foo had a great impact on how Americans thought of their Chinese neighbors. A column he wrote for a New York culinary magazine constitutes the first introduction many Americans had to Chinese food. In his columns, he described chop suey (Chinese zasui) and explained soy sauce.

Wong was a master of the publicity stunt. When a viciously anti-Chinese labor leader named Dennis Kearney charged that Chinese immigrants were stealing American jobs, Wong challenged him to a duel with “chopsticks, Irish potatoes, or Krupp guns.” They did not actually fight, but the newspapers egged them into a debate where the erudite Wong trounced Kearney. Throughout his life, Wong refused to bow to the white race. As he wrote:

“Of course, we decline to admit all the advantages of your boasted civilization; or that the white race is the only civilized one. Its civilization is borrowed, adapted, and shaped from our older form.”

Eventually, Wong Chin Foo made his way back to China, despite the price on his head, and died, reunited with his wife and son, in 1898. He was just 51.