“You’re going back to Titanic days,” says Dan Earls, National Flag Co.’s printer manager for 41 years and counting. He’s talking about the 110-year-old Huber printing press, and he’s not kidding: The roughly 10-ton cast-iron behemoth—which prints flags on lightweight cotton muslin—seems straight out of an engine room. National Flag Co. bought the machine back when it was new technology and has maintained it ever since, even lugging it (in multiple pieces, using a crane) when the business moved from Flint Street to Freeman Avenue in 1979. 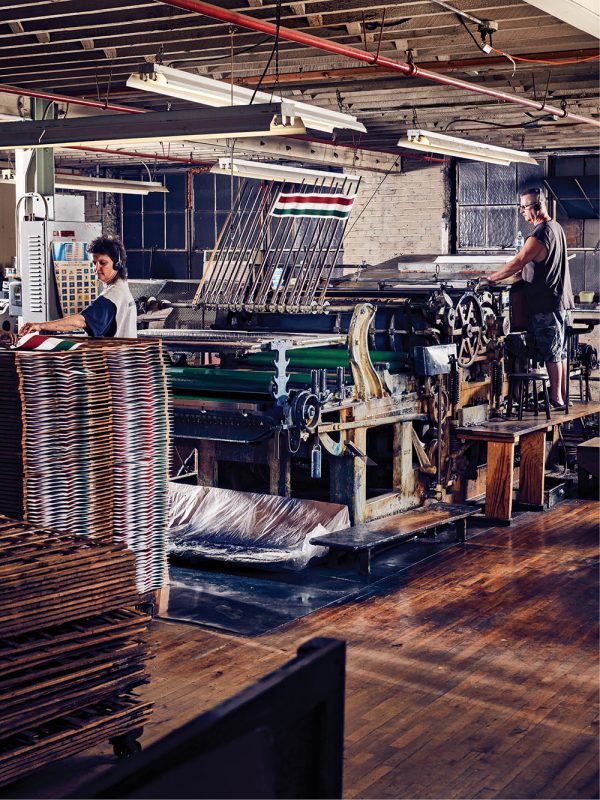 Three generations of Schallers (Art, Arthur Jr., and Artie III) work side-by-side running the West End company. “My great-great uncle George Schaller started working here in 1903, when he was 12 years old, as a stock boy,” says Artie, the general manager and de facto historian. “He became president in 1948. Worked here 74 years.” Earls does it all by hand: cuts and feeds the material, checks registration, and aligns the engraved plates. “I crank it up and I usually get about 2,000 sheets through a day. When there’s 18 [flags on each] of them, that’s 36,000,” he says. The machine prints both sides of the flags at the same time and can apply two colors per run. It works letterpress-style, so no water is involved. The Huber press only prints muslin flags—states, nations, armed forces, racetracks, you name it—but National Flag Co. also produces digitally printed and hand-sewn flags. They keep a bunch in stock and do custom work, too. Just ask.