Home News Islamophobia is on the Rise in Cincinnati 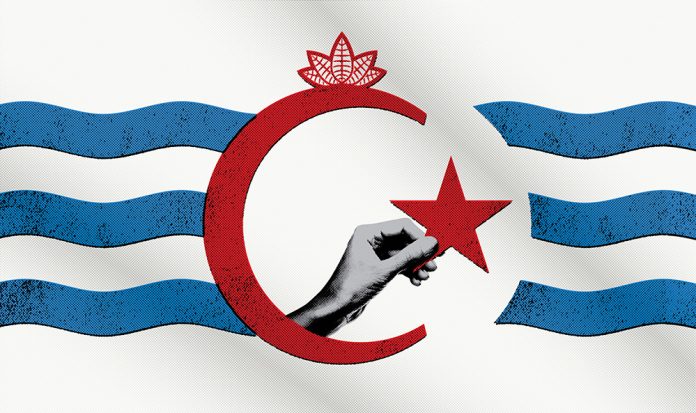 It was June 14, 2017, the midst of Ramadan, when Muslims the world over fast for a month in honor of the Prophet Muhammad’s first revelation. Hossam Musa, the Imam for the Islamic Center of Greater Cincinnati (ICGC), picked up where he left off the night before in his recitation of the Holy Qur’an, on pace to recite it in its entirety before the month’s end.

That’s when Shakila Ahmad, mid-prayer, heard the mosque’s doors thrown open from the women’s prayer balcony. A man, Luke Roberts, stormed in and began yelling, “Jesus is Lord!” at the congregation.

“My heart sank,” recalls Ahmad. She and others looked to one another for guidance, unsure if Roberts would become violent. Imam Musa, however, maintained his recitation during the incursion, and the congregation followed suit. After the prayer was finished, Ashraf Traboulsi, the vice chair of ICGC’s board, took Roberts outside and told him to leave. Roberts claimed he was a cop, but when Traboulsi called the police to verify, Roberts became aggressive, attempting to snatch Traboulsi’s phone. When he finally left the grounds, Roberts was arrested while driving on I-75 and charged with theft, impersonating an officer, criminal trespassing, and disturbing a lawful meeting. The ICGC hired an off-duty officer for security during the remainder of the nightly prayers.

“We shouldn’t have to feel that we need someone to watch our backs,” says Ahmad, president of the ICGC board and the first woman to hold such a title in the entire country. “But we want to provide a safe environment for those who worship, and for those who are curious about the faith.”

The wave of Trumpism didn’t take everyone by surprise. “The rhetoric started a year and a half before the election,” says CAIR’s Karen Dabdoub. “We already knew some of what was going to come with his inauguration.”

Unfortunately, it’s a growing need. Anti-Muslim incidents—including hate crimes, harassments, and employment discrimination—have risen 57 percent over the course of President Donald Trump’s campaign, election, and first term. Based on preliminary data for 2017, the Council of American-Islamic Relation’s (CAIR) Counter-Islamophobia Project saw an increase in the total number of complaint intakes and biased and violent incidences, making last year the worst on record for Muslim Americans since the organization began tracking this information in 2013.

“This is not just a perception,” says Zainab Arain, a researcher and advocacy coordinator with CAIR, which will release the report this month. “Its an actual, tangible reality for American Muslims in the United States.”

A reality not too far from home, either; roughly 18 cases of harassment and outright violence against Muslim Americans occurred in Ohio one week after Trump’s inauguration, making it the second worst state behind California, with 32. Zooming in on Cincinnati is comparably grim: Employment discrimination remains the most consistently reported injustice Muslim Americans experience here, according to Karen Dabdoub, executive director of CAIR’s Cincinnati branch. CAIR Cincinnati’s lawyer, Sana Hassan, says 63 total cases were assigned counsel in 2015, 67 in 2016, and 74 in 2017.

In spite of these numbers, and increased hostility from government officials, Dabdoub has also witnessed increased support for some local Muslims. The Immigrant Dignity Coalition, the Nonviolence Alliance of Greater Cincinnati, and the Cincinnati Community Coalition were all formed in the aftermath of Trump’s rise to political prominence. The Archdiocese of Cincinnati’s Social Action Office designed a program that brings together local Catholic and Muslim communities for talks, pairing St. Suzanna parish with ICGC and St. Francis De Sales with Clifton Mosque.

“People were scared, concerned, and wanted to come together to make something positive happen in our community,” says Dabdoub. “I think people are finally waking up to the violence certain communities have to endure.”

Shabana Ahmed, chair of the ICGC Tours and Talks committee, serves as host for the center’s monthly open tour dubbed “Know Your Neighbor.” Prior to the 2016 election, it would typically draw 20 to 30 people. The first tour after Trump’s victory brought in more than 400. After the president announced a travel ban on seven predominantly Muslim countries, the tour’s February 2017 event saw more than 600 turn out. Most of the groups Ahmed leads tend to focus on questions regarding women’s rights and terrorism, but these audiences were different.

“The majority of attendees weren’t coming for the first time,” says Ahmed. “They were people coming out [again] to show support of their Muslim neighbors. There were statements and acknowledgements from various groups that they were here for us.”

Measuring the progress and impact of these partnerships and talks is tough in the face of reportable, actionable transgressions, but Shakila Ahmad points back to ICGC’s “Know Your Neighbor” event in October 2017. A community member, Bill Schmidter, asked the host, “Name one Muslim country that has welcomed Christians like we have for you.” As Schmidter persisted, another community member in attendance finally stood up and asserted that the rest of the audience was there to listen and learn from the faith, not confront it. Reluctantly but respectfully, Schmidter backed down.

“We always have two choices,” says Ahmad. “You can crawl under a rock and do nothing, or you can realize that if you’re not willing to stand up and speak for yourself, who else can you expect to do that for you? For me, crawling under a rock is not an option.”