In May 2015, Hebrew-Union College’s Skirball Museum in Clifton acquired the archives from the erstwhile B’nai B’rith Klutznick National Jewish Museum in Washington, D.C. Among them was this miniature megillah, a scroll containing the story of Esther from the Tanakh (Hebrew Bible), which will be featured alongside similarly sized relics in the Eighteen Tiny Treasures exhibit opening September 18. “It’s not a piece of art that people have seen in secular culture,” says curatorial assistant Amanda Zahn. Now it’s finally getting its close-up.

The megillah is traditionally read during the festival of Purim, which generally takes place in late March or early April. “Purim commemorates the story of Esther,” says Zahn. “It really celebrates the continual resilience of the Jewish people.”

“The megillah itself—we believe, based on the brass markings—is from the mid-to-late 1800s,” says Zahn. Because this particular piece came without any official documents, its specific origin and date are unknown. The brass filigree case is about four inches tall and embellished with ruby and turquoise. Inside is an ornate parchment scroll, hand-painted with Hebrew script and artful details.

The museum’s best guess is that it was made by a German silver and brass maker from the town of Hanau, but Zahn says megillahs are crafted everywhere. “They’re all just a little bit different, but the text is still the same.” 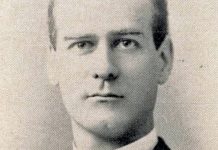 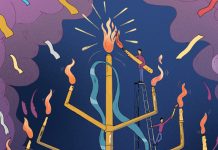 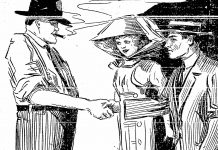