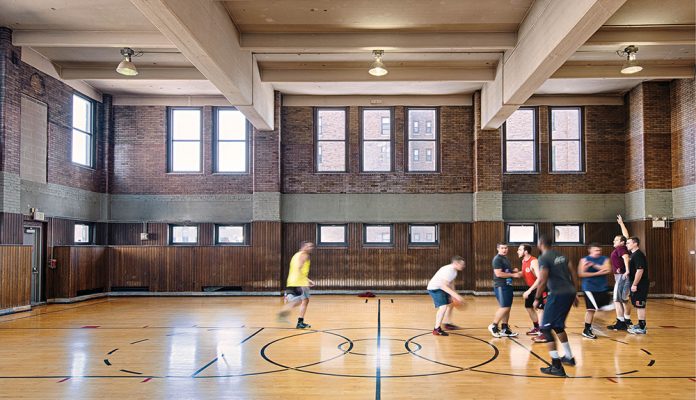 Before there were Zumba classes and TRX Trainers, there was the Christ Church gymnasium. It opened in 1909 on the fifth floor of the congregation’s parish house, a Gothic Revival structure funded by philanthropist Mary Emery. Affluent parishioners as well as neighbors from the surrounding tenements were welcomed here to socialize, take classes, and recreate. There was a bowling alley in the basement, and in the 1940s, a teen canteen. But the hot spot was always the gym, an athletic aerie wrapped in brown wainscoting. The elevated, leather-floored running track that circled the court is gone now; so are the pommel horses and Indian clubs that were the high-tech fitness gear of their day. But the antique gymnasium remains in service to its neighborhood. It’s available for pick-up basketball games mid-day during the week; on Saturday mornings it’s open so that city parents can bring their kids in to run off some steam. And the tradition of inclusion continues, says church archivist Dennis Harrell. “No proselytizing.”