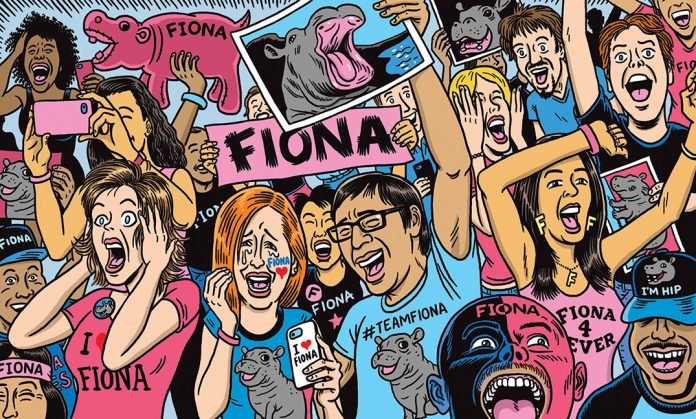 There are no tenable means by which Cincinnati could collectively share its insecurities and obsessions with a psychiatrist. An adequately sized couch does not exist. Finding a communally convenient time for even one appointment, much less weekly ones, is impossible. Besides, no insurance plan would provide coverage for these therapy sessions, as Cincinnati’s deepest emotional struggle is not listed in the DSM-5. That’s how unique—untreatable?—our problem is.

And it is thus: Cincinnati has a centuries-old, deep-seated, chronic, multi-species obsession with animals. Not in the Jerry Springer sense, but rather the manner we go crazy—again and again—for various creatures in our midst. It’s wonderful that so many of us in the Queen City love animals, that we empathize with their struggles and triumphs. But there are limits to this empathy that, arguably, we have exceeded. Perhaps it’s our escape valve, a way to cope with the many troubling events in our world. Why focus on the impending collapse of humanity when we can focus on a baby hippo? #TeamFiona is in fact a pre-existing condition.

How should we manage this? Therapists often say that a good first step toward overcoming a problem is to simply name it. So, in the hope of our united municipal recovery, may we propose the following designation for Cincinnati’s unique emotional quirk: Heartfelt Adoration Regarding Animals; Magnanimous, But Excessive. (Or, for short, H.A.R.A.M.B.E.)

Like many psychiatric abnormalities, this one goes back to our childhood. We’re all familiar with the 19th-century pork trade that gave Cincinnati its nickname, and we’ve heard tales about the rivers of animal fat that turned into P&G’s famous categories of soap: bar, flake, liquid, and opera. As an adult city, we express symptoms via attachment to winged brass pigs, painted swine on street corners, porker-shaming marathons, and more. But No, you say, we don’t have a problem.

Cincinnati has had two elephants named Schottzie, in honor of Charles and Marge Schott, major zoo donors. Marge, of course, also had two dogs named Schottzie who were regulars at Reds games when she owned the team.

Other animal-obsessed memories have long been repressed, such as the city’s profoundly bizarre Christmas Parade of Meat. In the mid-1800s, this was as famed a tradition as Shillito’s Elves, CG&E trains, or ice skating on the Square, but has since been placed on our mental no-fly list. Each year around December 22, Cincinnati crowds gathered to cheer a procession of cows, pigs, sheep, and even bears taking a few laps around a not-yet-built Fountain Square, accompanied by—and this is what sends it into Kafka territory—marching bands. Everyone returned on Christmas Eve to see the animals again, this time as freshly butchered holiday dinners displayed in elaborately decorated stalls. Merry Christmas, everyone! No problem here!

Then there was Martha the pigeon at the Cincinnati Zoo. She was, by 1910, the world’s last surviving passenger pigeon, becoming quite famous thanks to the zoo valiantly attempting to locate a mate for her. Sadly, a $1,000 reward, huge for its time, failed to turn up even a depraved pigeon gigolo. When Martha died in 1914, she was immediately brought to the Cincinnati Ice Company and frozen into a 300-pound block. A problem, maybe?

Need we remind you of the Great Cow Escape? In 2002, a half-ton Charolais cow jumped the fence at her Camp Washington slaughterhouse and went full Richard Kimble for 11 hilarious days. When finally captured, she was given a Key to the City—undoubtedly as confused as any human about what to do with it—and was almost included in that year’s Opening Day Parade. Problematic, at least.

Our more recent obsessions include Harapan the rhino, Angel the cheetah, and the current darling of the Queen City, Fiona the hippo. Born six weeks premature, we’ve received near-constant Fiona updates for months now, as if she’s some adorable, grain-munching, baby-pool-splashing New York Stock Exchange. And then there is Fiona’s predecessor, Harambe the gorilla. His tragedy, though a different tenor than most of his furry/feathered/ear-wiggling brethren, is still the most extreme example of the point we’re making: That incident could have happened anywhere, but something about our fair city sparked an aftermath that marks us as the world’s fauna capital of “Well, that escalated quickly.”

What is it about Cincinnati and animals? It’s unclear. The question is undeniable, but the answer is still hibernating. In the meantime, Fiona is a growing girl, cute as a button. By the time you read this, she may have already made her official Zoo debut with her companions, donning tutus for their reenactment of the hippo ballet in Fantasia. In this town, it could happen.