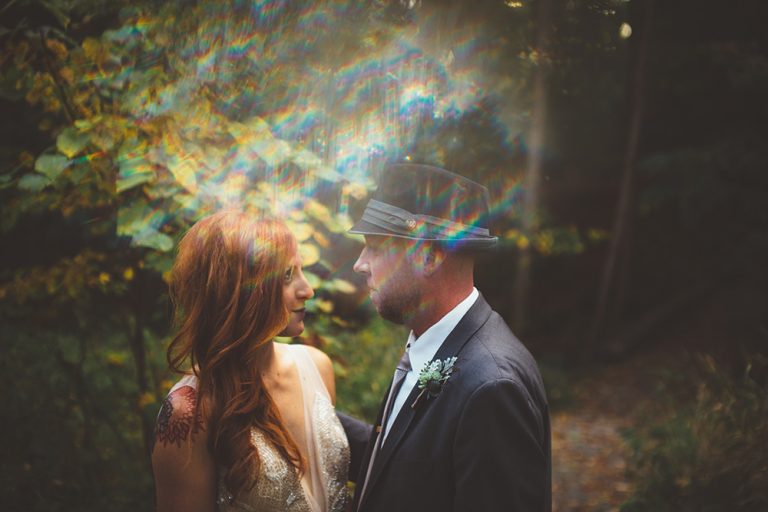 On their 10-year dating anniversary, Laura Mercier and Chuck Hagedorn tied the knot surrounded by family and friends in the woods at the serene Krippendorf Lodge, part of the Cincinnati Nature Center at Rowe Woods. There was no proposal, and the bride ordered her ring online, but the two wanted to solidify their commitment with an unforgettable experience. “We wanted to immerse everyone in our little world for the night,” Laura says. “We wanted our wedding to feel like a party.” By all accounts, it was.

Throughout the wedding and reception, which took place on the Lodge’s wraparound porch and underneath a tent, the couple encouraged mingling among their 150 guests. They also wanted to be a part of that mingling. “We didn’t do anything that would take us away from our party,” Laura, a hairstylist, says. “We didn’t cut a cake because there was no cake, we didn’t dance with our parents, and I didn’t throw my bouquet because it was 20 pounds of succulents.” Instead, the bride and groom and their guests sipped His and Her cocktails and enjoyed fare from three different food stations (Indian, Asian stir-fry, and Southern fare), as well as a scoop from the Dojo Gelato truck, all while listening to a handpicked soundtrack including DeVotchKa and The Postal Service.

Laura took on the project management role and was in charge of all the logistics leading up to the wedding, while Chuck DIYed absolutely everything. “Nothing was too hard,” he says. “We had an idea of what we wanted to do, and we didn’t want to spend a bunch of money.” Chuck, who is an artist, recruited his 11-year-old son Isaac to help with many of the projects. “We’d go to the thrift store and get little votives and spray paint them.”

The groom also spray painted plastic animals that were used as place card holders and little flashlights that the couple set around the perimeter of the tent to encourage guests to explore the nearby walking paths. He designed and built wooden signs, and made all of the centerpieces. “We had to keep a hundred succulents alive for a couple months because we ordered them wholesale from California,” Laura says. Chuck describes their garage as “wedding central” for the six months leading up to the big day. “The day after I felt like an empty nester,” laughs Chuck. “Like, what do I have to do now?”

Their day was clearly a team effort. “We’ve been together for so long; it wasn’t a young wedding, it was a mature wedding,” Chuck says. “We balance each other out really well, and somehow it just works.” One of the couple’s best friends, Joe Mesa, officiated, and when it was all over, guests took home single-serving boxes of pie. Now that’s what we call sweet.