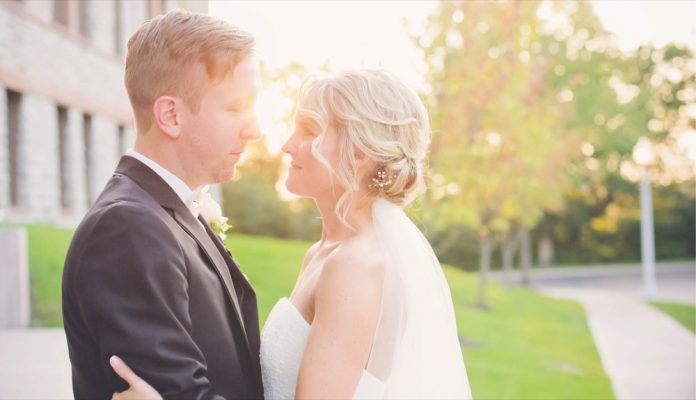 Stephen Dierker asked Colleen Dalton to be his wife less than nine months after they started dating. Friends and family knew marriage was a forgone conclusion just a few dates in and after Colleen said yes, so was their wedding venue. The couple instantly thought of the Cincinnati Art Museum, visited the space, and fell in love with the ornate staircases, vaulted ceilings, and romantic courtyard. Serendipitously, work from two of Colleen’s and Stephen’s favorite artists, Van Gogh and Warhol, is displayed along the grand hallway leading into the Great Hall where the ceremony and reception were held.

Flowers were of the utmost importance, Colleen says—she wanted to use blooms to soften the museum’s hard lines, marble floors, and brass doors. Marti’s Floral Designs exceeded her expectations with romantic centerpieces oozing modern sophistication, evident in the gold, hand-painted foliage. Ileana Saldivia turned the couple’s modern, romantic theme into a stunning and delicious wedding cake, complete with gold and black sugar flowers that now sit preserved in a vase in the couple’s home. Each visual detail was carefully considered, and so was the ceremony content. The minister, Father Bill Proud, married the bride’s aunt and uncle 40 years ago and worked with Colleen and Stephen to create a ceremony that incorporated Catholic traditions in a non-traditional museum setting.

Stephen, a former chef, weighed in on food and beverage options; Colleen jokes that taste testing was one of their favorite planning tasks. Stephen also insisted on a photo booth, which was a guest favorite. Colleen’s mom contributed immensely to the look and feel of the day, spending countless hours hand-sewing table runners. Walking down the aisle, time stood still; Colleen saw everyone she loves and many months of hard work realized. The result was a dreamy, Art Deco–inspired soiree culminating in a dance-off between the bride’s father and two older brothers. As beautiful as the event was, Colleen says, “You know you’ve married the right person when the most exciting aspect is waking up the day after the wedding and being married.”