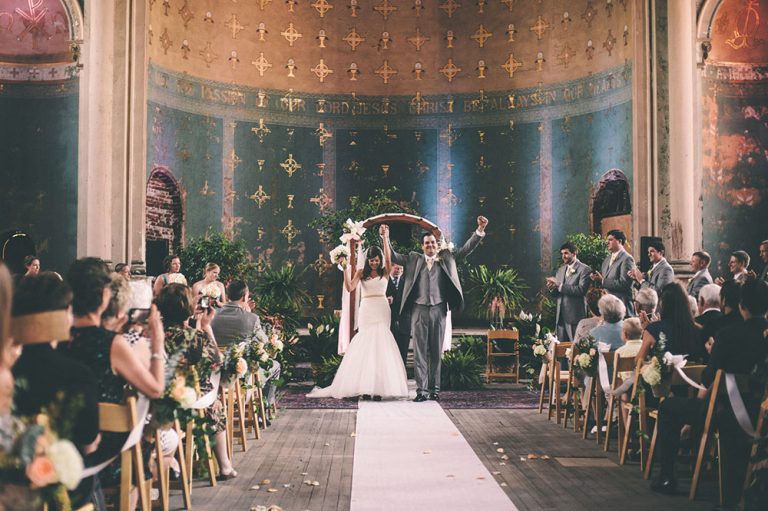 Even though Chrissy Yund (née Rother) and Jeff Yund call themselves “Miami Mergers” because they met during college in Oxford, they are both Cincinnati born-and-bred (she on the west side, he on the east side), and it was important for them to incorporate Cincinnati’s rich history into their big day. The two got engaged under a trellis in the gardens at Ault Park, and they discovered Holy Cross Monastery and Church together accidentally as part of Chrissy’s work with the Cincinnati Art Museum.

When the couple chose Holy Cross for their ceremony site, their family members were concerned. It was built on the original site of the city’s first observatory in 1895, and it’s listed in the National Register of Historic Places. The problem with this beautiful landmark was that the church hadn’t been used since the 1970s.

“The only thing that was important to me, aside from the large dance floor and open bar at the reception, was that she got to have the wedding where she wanted it,” says Jeff, the director of business operations at Prolink Healthcare. So he assembled a cleanup crew to get the church ceremony-ready. Friends and family spent several weekends in dust masks preparing the space, sweeping up plaster. On their wedding day, Iacono Productions gifted professional lighting so that the paint details at the front of the church were on display, and audio services so the officiant, Jim Brown, and violinist, Jude Jones, could be heard. Their families were surprised at how beautiful the church looked that day. The bride’s mother (who owns Cake Creations by Sue) contributed three cakes and 200 cookies decorated with historic Cincinnati images including the Findlay Market sign, Union Terminal, Cincinnati Music Hall (where the reception was held), and of course, Holy Cross.

Cincinnati Music Hall, another city treasure, was chosen for the reception because of its rich history and stunning architectural details. Tables were adorned with gold napkins and natural centerpieces. Some had cut tree slabs and pale pink and ivory flowers by the florist and others had hurricane vases of manzanita branches designed by the bride and her mother. The photo escort cards, also created by the bride, featured historic photos of Cincinnati landmarks. Guests danced the night away to live music by The Chuck Taylors.
“When she told me everything she wanted to do for the wedding, I tried to talk her out of it,” Jeff jokes. Truly, every aspect was expertly managed by the bride, who smartly enlisted the talents of her friends and family to execute each special detail. We think the results speak for themselves.