I came away from Cincinnati’s win against Baltimore a changed man. You see, for the first time in my life, the hopes of my hometown team hinged, at least partly, on the play of Andy Dalton. If Dalton played well and the Bengals defeated the Ravens, the Jets won in Miami AND the Chiefs’ ballboys beat the Chargers, then the Steelers would make it to the playoffs. (And they would have played the Bengals.)

So while watching some of the Bengals game live, I saw the world through a different prism. I knew Dalton could be a maddening quarterback to watch; I’ve watched every snap he’s taken this year. But I’ve only watched a few games live, and in no other game did I care particularly which team won. But this time, I wanted the Bengals to win badly. So when the first pass Dalton threw was intercepted, I was not encouraged. By the second interception, I was becoming angry. And when the fourth and mercifully final INT came in the fourth quarter, I just felt sad. There is a whole city—one that thoroughly enjoys good football as evidenced by the raucous home crowds—that is relying on Andy Dalton to deliver them from the years of heartache and misery. And here he was, mixing two solid touchdown throws and another that should have been caught with four interceptions, only one of which wasn’t primarily his fault.

It was the kind of game that Andy Dalton has made a habit of producing this year. He did not play particularly well, his numbers were a bit misleading (though he should have had one more touchdown) and, most importantly, his team won by a lot of points. Those kind of performances are fine in the regular season, against teams like the Vikings and Ravens. But against good teams, playoff teams, he won’t be able to get away with nearly as many mistakes. (I should point out, though, that the Bengals are 4-0 against playoff teams. And Dalton hasn’t played terrible in those games. But he’s only faced two playoff teams since Week 5.)
But before I dive into the psyche of what Andy Dalton was thinking with some of those decisions, I wanted to take a look at an interesting wrinkle the Bengals have been using in their offense over the past two weeks.

Over the past two weeks, the Bengals have been successfully using the type of read-option play that has come en vogue over the last few years in the NFL with quarterbacks like Cam Newton, Colin Kaepernick, and Robert Griffin III running it successfully. It’s not a new play or design; it has been around in the college game for a long time. But NFL offensive coordinators have begun to find ways to use it. The argument against the read-option, or any type of option play that involves the threat of a quarterback running, is that NFL defenses are too fast for that to work. (And it exposes the quarterback to unnecessary injury risks.) But, for reasons I’m not even entirely sure of, it has seen periods of success in recent years. (Now whether or not it is a viable concept to build an offense around is an argument for a different day.) 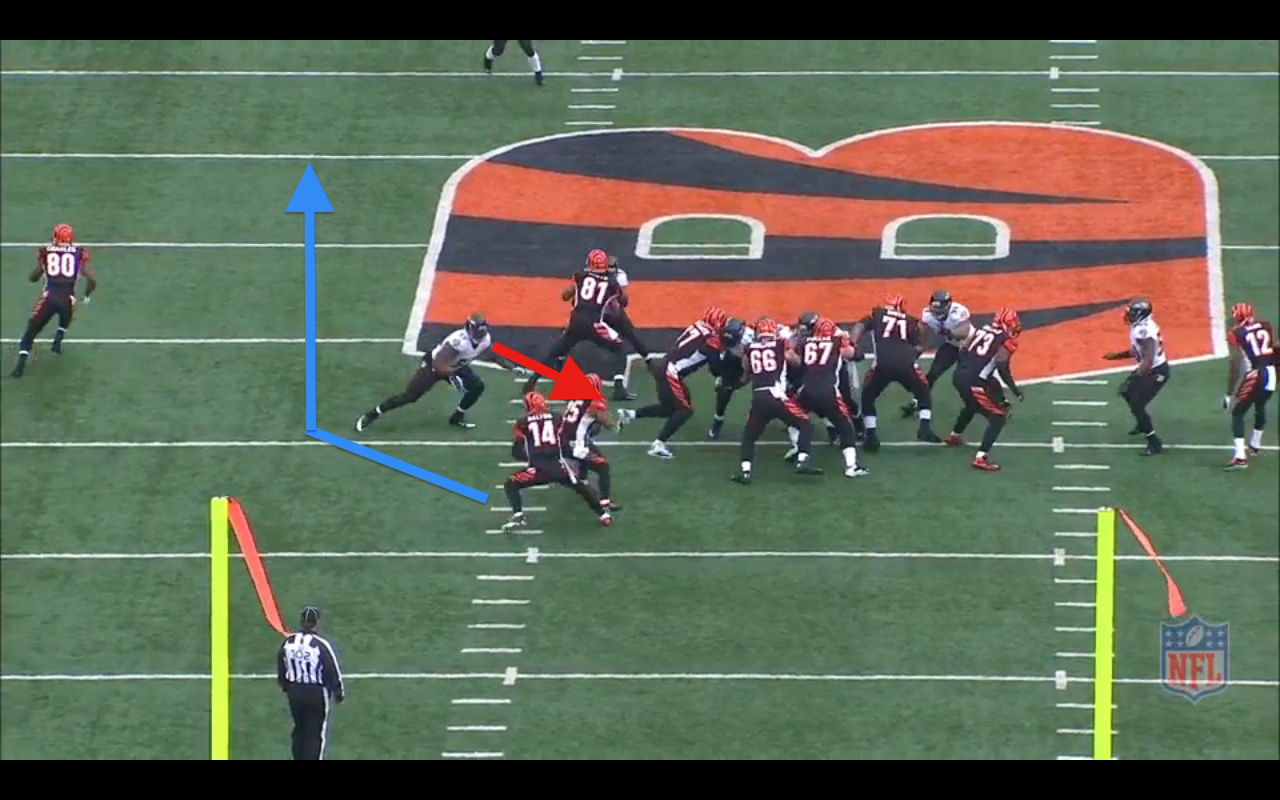 Now typically, this requires a fast quarterback. The aforementioned QBs are all much faster than the average QB. But as the Bengals have shown, you don’t necessarily need a speedy quarterback for it to be successful. (Dalton ran a 4.87 40-yard dash at the 2011 NFL Combine.) You just need someone who is athletic enough to sell the fake and immediately get upfield if necessary.

Look, this is by no means an offensive-philosophy changing move. It’s just a new wrinkle that gives defenses more to worry about on a given play. (Note: the Bengals may have been using this occasionally throughout the year, but I first started to notice a series of plays in Week 16.)

I watched the tape and counted the number of read option plays over the past two weeks. Against the Vikings they ran just three, but against the Ravens they ran seven. In those plays, the running backs have had 7 carries for 32 yards. Dalton, meanwhile, has had 3 carries for 20 yards and a touchdown. Now no one is going to confuse that rushing performance with Kaepernick, Newton, or RGIII, but I thought it was smart of Jay Gruden to try something new, and it at least had a little success. And who knows, maybe the Bengals don’t run a single read-option play against the Chargers on Sunday. I wouldn’t be entirely surprised by that. But the Chargers will at least be thinking about it, and if that’s enough to make one player hesitate for one second to give a Bengals receiver or back an extra foot of space, then I’d say the brief foray into the land of running QBs was worth it.

Now onto the bad stuff.

I’ve decided to hand out awards for the worst of the interceptions, ranging from “Eh, it’s not that bad” to “Are you freaking KIDDING me?”. Let’s see how the four interceptions stack up. 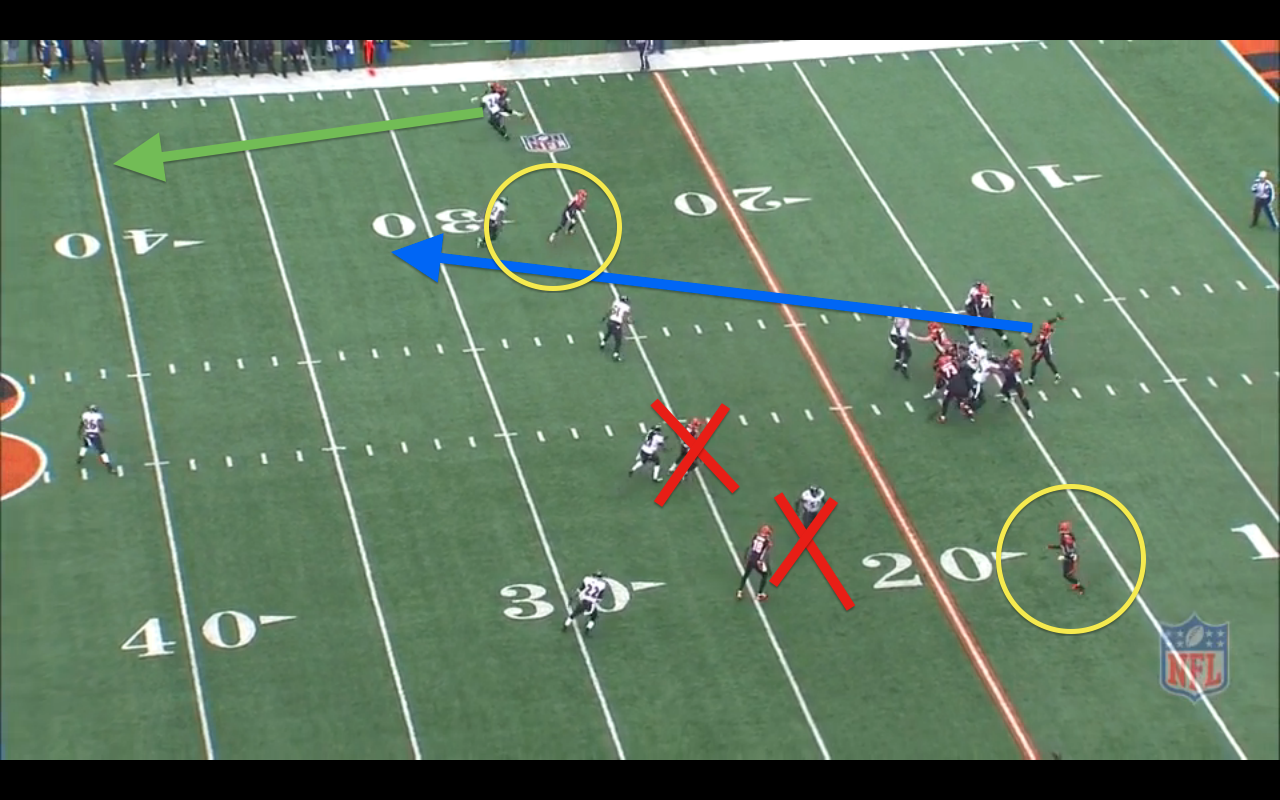 This is the Bengals first offensive play of the game, and the idea/decision was not that bad. Dalton had his receiver, Marvin Jones, in one-on-one coverage on a fly pattern. Jones has shown a penchant for making tough, acrobatic catches, so this would seem to play in his wheelhouse. But the ball is under thrown slightly, causing Jones to reach over the defender to try and catch it. Cornerback Corey Graham makes a great play on the ball, so it’s tough to put all of the blame on Dalton for the slight underthrow or Jones for not batting it down. (Also, not a lot of other options for Dalton on this play.) It was definitely the least egregious of the interceptions.
Dalton’s Culpability: 43.5%

No. 3: “Well, it’s certainly not a good decision.”
And the winner is…Interception No. 2! 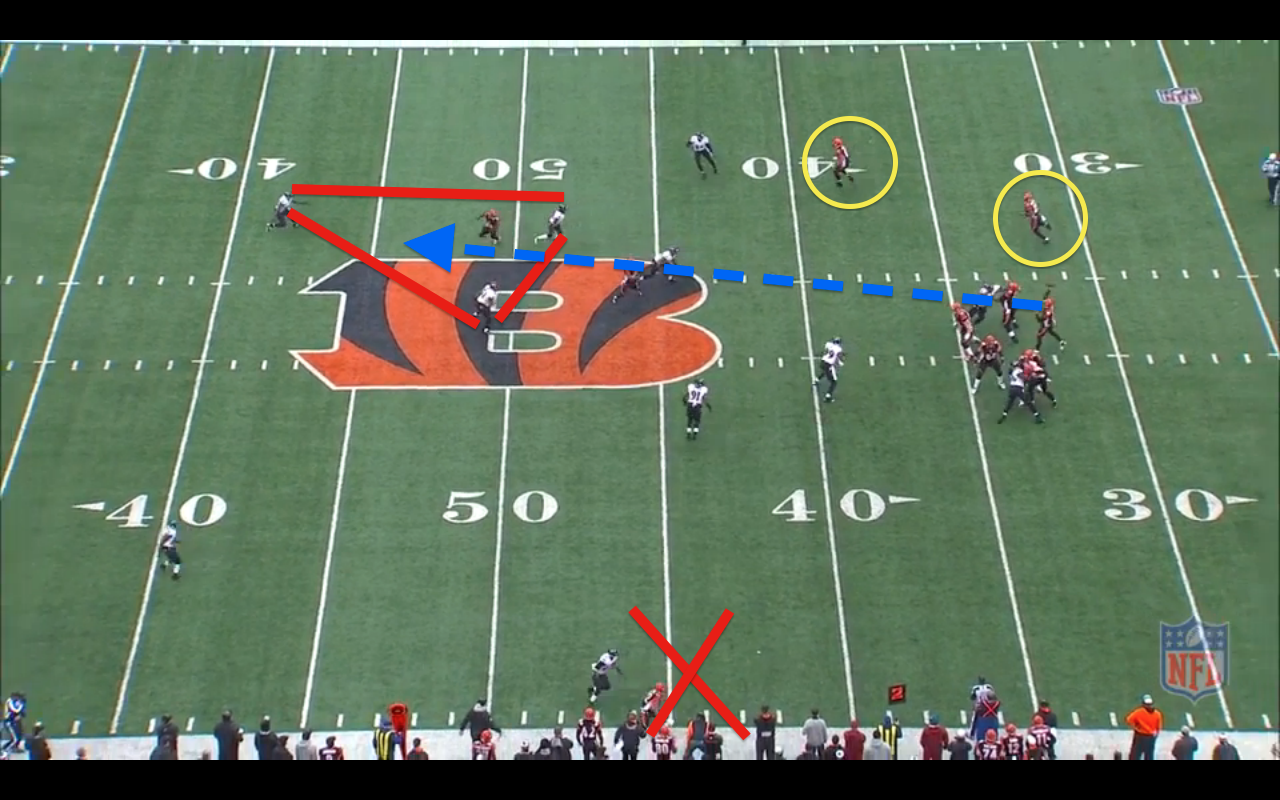 Unpopular opinion alert: A.J. Green may not be a wide-receiver-cyborg incapable of rounding off routes and not breaking up bad passes. The obvious problem with this play, though, is that Dalton is throwing into the ominous red triangle of doom. Good things do not happen when throwing into these tight, nearly non-existent windows. The ball sails on Dalton as well, far beyond the reaches of his intended receivers, regardless of the route he was trying to run. But Green is partly at fault here. He ran a sloppy route. It looks like the plan was for him to run a seam route or a skinny post, but instead he rounds off his route, making the dreaded banana route your Pop Warner and JV football coaches warned you about. Dalton never should have thrown that ball, seeing as there were two check-downs available. But Green ran a sloppy route and didn’t help his cause.
Dalton’s Culpabililty:  58.9%

No. 3: “Why throw the ball on first down at the one yard line? WHY?”
And the winner is…Interception No. 4! 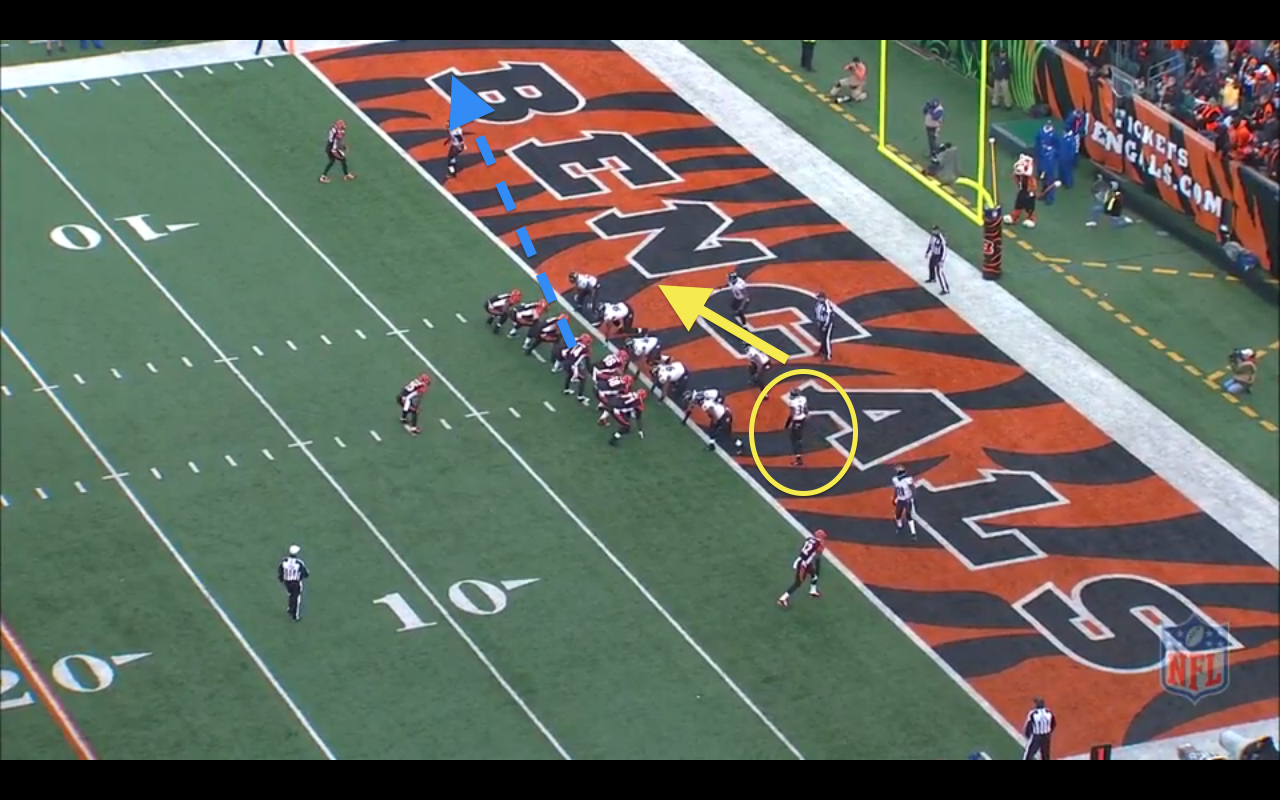 This play surely caused my esteemed editor Justin Williams to toss his remote like a ninja star at the wall (Ed’s note: yep!), and when we learned that it was an audible at the line of scrimmage by Dalton, it made it even worse. (Ed’s note: YEP!!!) But here’s why Dalton changed the play. Safety James Ihedigbo shifts from the left side of the defense to the right, lined up directly over the hole that the Bengals were planning on running through. Now I’m not particularly well versed in the Bengals audibles, but I would imagine there’s a way to flip the direction of the play. (I mean, you can do it in Madden.) So why they wouldn’t audible to a run to the opposite side is beyond my comprehension. I do know, however, that Dalton severely underthrew the pass, making it nearly impossible for A.J. Green to catch. Now that doesn’t mean Green should have just thrown his arms in the air and let Jimmy Smith come down with the interception. He even said after the game that it he should have tried harder to bat the ball away. But he also should have never been in that position in the first place.
Dalton’s Culpability: 71.18%

No. 1: “Are you freaking KIDDING me?”
And the winner and crappiest of the interceptions is…Interception No. 3! 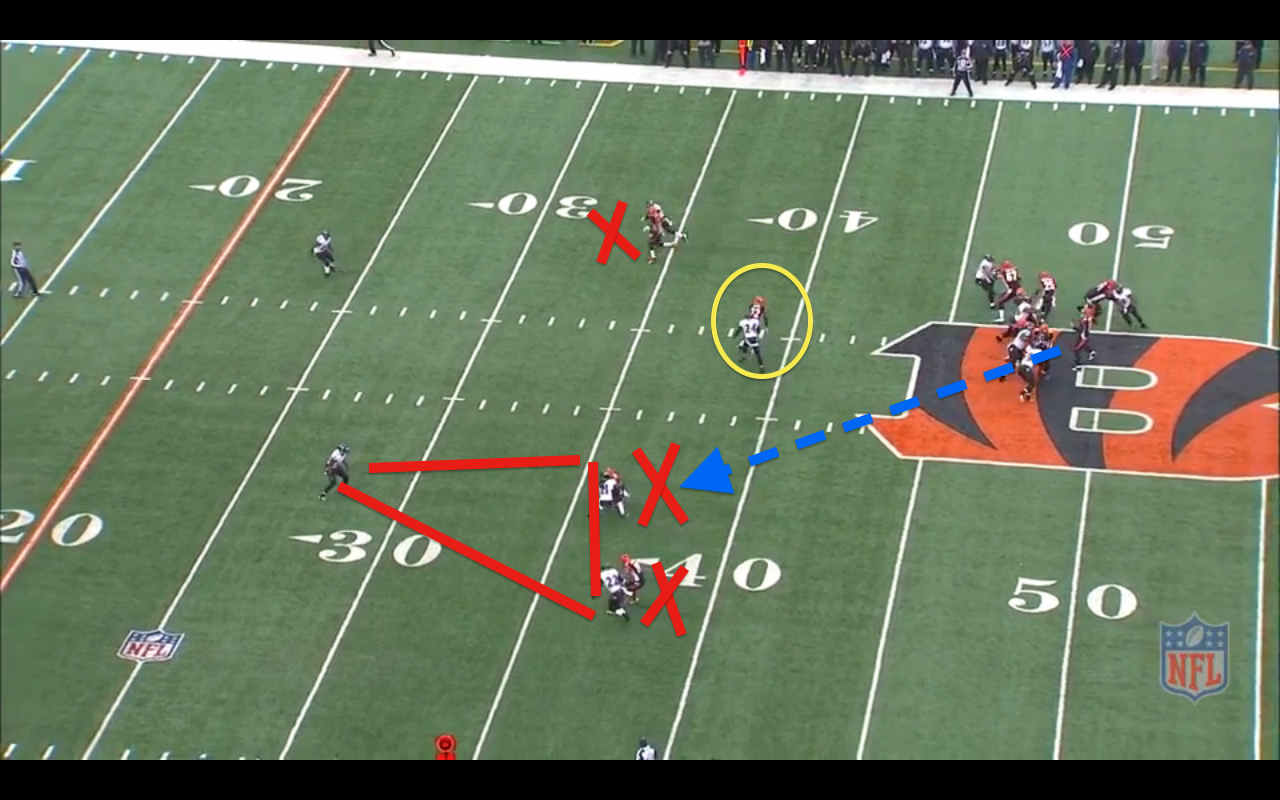 The ominous red triangle’s gravitational pull sucks Dalton’s eyeballs right into its perilous center. Under no circumstances should this ball have been thrown. Not only are the two receivers there blanketed, but there is a safety lurking that Dalton should have immediately picked up. But this was a case of the old Dalton resurfacing. He locked onto that side of the field before the ball was even snapped and threw the ball under the spell of the Gods of the Red Triangle. It did not turn out well.