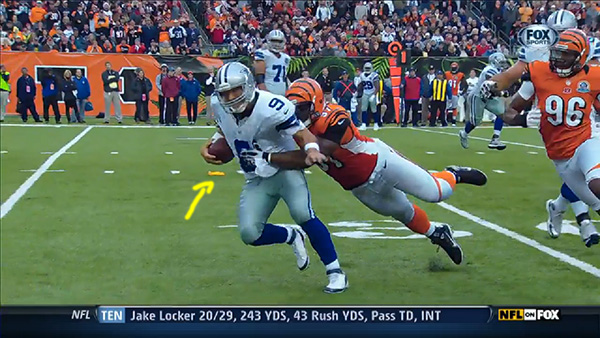 I assume you were tossing and turning all night in anticipation, but you must wait not a moment longer. I’ve chronicled the six best, most punishing sacks of the season by Geno Atkins. If you missed the first seven on Monday, be sure to check them out here.

The grading scale, in case you need a quick refresher:

This is to make it equal for when Geno attacks good offensive linemen vs. bad ones.

For when a sack elicits an audible gasp or booming roar from the crowd.

A mix of style, punishment inflicted, and technique. Kind of.

So if Geno executed a perfect sack, it would be worth 20 points. Quarterbacks, gird your loins.

I’m not going call myself the Rembrandt or Van Gogh of screen grabs—that may be downplaying the considerable skills I have acquired. In this shot (see photo 8), you can see everything that makes this sack wonderful. You see Geno Atkins pouncing like a leopard, arms wrapped around Romo’s waist. Romo’s face is perfect too, a beautiful portrait of a man that is staring at his own certain demise. But the pièce de résistance is how Romo’s right arm perfectly frames the flag thrown for the holding penalty committed by Dallas against, you guessed, Geno Atkins! Fighting adversity, pursuing redemption, and conquering an adversary, all in just one screen shot.

Geno vs. Joe Flacco—Part I

Matt Birk is a scholar and a gentleman. The six-time Pro Bowl center graduated from Harvard with a degree in economics and won the 2011 Walter Payton Man of the Year award. And Geno gave him a little lesson in supply-and-demand. He supplied copious amounts of raw power and demanded Birk roll backward like a bowling ball. (I’ll be here all week for your crappy 90’s TV bully jokes.) After dismissing Birk, Geno engulfed Joe Flacco and, I like to think, celebrated in his mind like this. (Refer to photo 9)

There are many different ways to properly dispose of a quarterback. Wrap him up until you hear the whistle, whip him to the ground and risk a penalty, or team up with a friend to tackle him. But this move—the clean, blindside rocking delivered by Geno—is a thing of beauty. Flacco does not see it coming until the very last second (high “fear evoked” score because he saw it just before getting smacked), and when Geno makes contact, Flacco is launched in mid-air before dropping to the ground. (Refer to photo 10) To be able make a play like this, with no offensive lineman even close to catching up to you, should not be as easy as he makes it look.

I know I did not put a criterion in my grading scale for impact on the game; it was an intentional move. You see, I’m not sure which is more meaningful—a sack to set the tone at the beginning of the game or a sack to halt momentum at the end of the game. I imagine that the answer would differ from person to person, player to player.

That being said, I factored that in while deciding this sack deserved to be No. 3. It was a playoff-deciding game for both teams and the sack established early on that the Bengals were not going to go down without a fight. Oh, and it does help that Roethlisberger is the hardest QB to tackle in the league. (Refer to photo 11)

Yes, there is a part three. And frankly, there probably could have been a part 3.5 or part 4 as well. Geno dominated Pittsburgh’s interior linemen in both games, but this particular attack against Willie Colon was jaw dropping. Once upon a time, Willie Colon was considered one of the best guards in the NFL. Two surgeries and nearly two full seasons of missed games later, and Steelers fans are treated to plays like this. Geno uses his hands to stay inside Colon’s shoulder pads and uses his lack of height as leverage against the 6-3 guard, picking him up like Colon was a science dweeb and Geno needed some milk money. While it may not have finished the sack exactly, it is a move worthy enough of a perfect “finishing move” score. (Our first perfect grade!) Ben sees the entire sequence play out, something that is all too common for him, and can do nothing but wait for his time of reckoning to come. (Refer to photo 12)

From an outsider’s perspective, Carson Palmer and the city of Cincinnati seem to have a strange, ambiguous relationship. Things were going well at the beginning, then Kimo von Oelhoffen happened. Things begin to spiral downward, and eventually a disgruntled Palmer was shipped to Oakland for a haul of draft picks far exceeding his value and pricey contract, and Cincy fell in love with a new red-headed quarterback. Palmer returned to Cincinnati this season for the first time and was not met with a warm reception. There was not an outpouring of boos or a Twitter explosion, but there was definitely a dormant bad taste in Bengals fans’ mouths that was awoken when Palmer took the field. Everything about this sack is perfect. Geno sprints off the line so quickly that the Raiders offensive linemen can barely muster a fingertip on Atkins. He then tosses all of his 300-plus pounds into Palmer’s sternum in a hit that meant something more to the fans at Paul Brown Stadium. Geno picks Palmer up, drives him into the ground, and delivers the message the city wanted him to receive: Eat it, Carson. (Refer to photo 13)

Thank you, Geno, from all of us…minus the QBs that made the list.