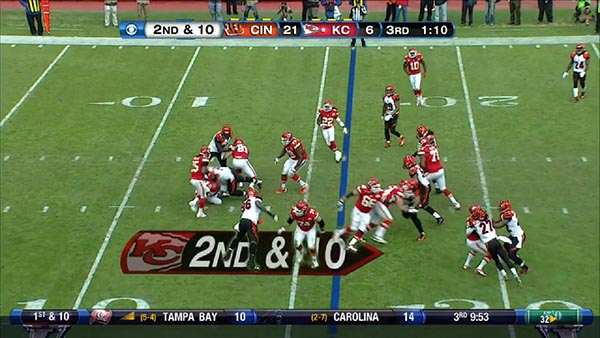 I know it’s been hard for you, Bengals fans. Your spirits were lifted after your team snuck past those darn Steelers and sauntered into the playoffs. Somewhere beneath the completely warranted skepticism and reluctance to become emotionally attached to a self-combusting entity, there was a real belief that your beloved Bengals could rally against a limping Houston squad and win a playoff game for the first time since starting linebacker Vontaze Burfict was three months old.

And then it all came crashing down, one namaste bow after the other.

I’m not here to gloat about worry that Andy Dalton’s ineffective play the last month or so of the season would hurt the team even more in the playoffs. The wound is still fresh, no need for some salt.

No, instead I come offering solace from that sixth bowl of Skyline. (That’s what you guys do to cope with losses, right?) Instead, I offer the chance to reflect on the shining star of the season that was. A figure that assumed near-mythical status in this space and earned the praise of analysts while instilling a fear in offensive linemen only rivaled by a stampede of wild rhinoceroses. A man that made quarterbacks wish they could summon all there Te’o-ian powers and evaporate into thin air. A main named Geno Atkins.

Atkins finished a remarkable 2012 season by being named a first team All-Pro and, if there is any sort of justice in this league, should finish in the top three in Defensive MVP voting. (In a universe where J.J. Watt does not exist, Atkins would have my vote.) His four forced fumbles were the most of any defensive tackle. He had 18 tackles for loss, also most for a defensive tackle. And then there were the sacks. Oh, the sacks. Atkins tallied 12.5 sacks, sixth most in the league and by far the most of any defensive tackle. (The next closest DT, Ndamukong Suh, finished with eight.)

In previous When Geno Attacks pieces, I tried to shy away from the sacks and show how Geno can impact a game by not even making a tackle. Well, now it’s time to give rightful praise to the most feared pass rushing defensive tackle since an in-his-prime Warren Sapp.

I watched all 12.5 sacks and decided to rank them on a set of criteria that is a mix of Iron Chef-style objectivity (Take THAT Cat Cora!) and Billy Madison-style subjectivity. Here’s what I came up with.

This is to make it equal for when Geno attacks good offensive linemen vs. bad ones.

For when a sack elicits an audible gasp or booming roar from the crowd.

A mix of style, punishment inflicted, and technique. Kind of.

So if Geno executed a perfect sack, it would be worth 20 points. Easy enough right?

Without further ado, here is the countdown of Geno Atkins’ best sacks of the year. We’ll give you the first seven today, followed by the top six on Tuesday.

The lowest rated sack involved the least amount of talent and relied solely on the incompetence of the Kansas City Chiefs. Quarterback Matt Cassel fumbled the snap, dove on top of it with enough time to potentially hop to his feet and throw the ball away. (Okay, that may be a stretch.) But standing in his way was Geno, who mercifully plopped on top of Cassel to register one full sack. (Refer to photo 1)

This was only the third game into RGIII’s rookie season, so the young fella caught himself a case of the happy feet while trying to make a play late in the game. He evaded defenders but could not tiptoe around Geno, who was able to stay with the play long enough to fall on Griffin. So while on the surface a sack of an elusive QB like RGIII would score high on D.O.D/M.I.L.E, this play was far more about the good coverage than the pass rush. (Refer to photo 2)

Geno vs. Blaine Gabbert—Part I

This is what you would call a mercy sack. It scores incredibly low on D.O.D/M.I.L.E since Gabbert was basically begging to be sacked by stepping into the part of the pocket that was collapsing rather than the wide open part to the right (refer to photo 3). But what it lacks in D.O.D/M.I.L.E, it makes up for in Fear Evoked. Poor Blaine Gabbert. The little guy never stood a chance.

Everything that applies to sack 10.5 applies to this one as well. The only difference here was that the finishing move score slightly higher after destroying the right guard. But don’t forget kids, this is still Blaine Gabbert we’re dealing with here. (Refer to photo 4)

Sensing a trend here? The younger and/or crappier the quarterback/team is, the harder the grading scale is. Don’t blame me—Nate Silver backed up my statistical models, I swear. But this sack showed both how quickly Geno can beat an offensive lineman and how holding is just delaying the inevitable. Well done, Geno. Put the rookie in his place. (Refer to photo 5)

This is what you would call a textbook sack. Geno beats the guard around the outside, ripping past him with his unstoppable combination of speed and power. He then launches himself, making his body nearly parallel to the field and scoring very high on finishing move. (Check out photo 6 for further evidence.) He wraps up Rivers around the waste and takes him to the ground. All the while, he made it look simple. You know what that means—high D.O.D/M.I.L.E for sure. Sure, it may only count for half, but it was worthy of a full sack grade to me.

Geno vs. Ben Roethlisberger—Part I

I put it off long enough. It’s time to take a look at how Geno dismantled my beloved Steelers. (Spoiler alert: this is not the only play.) Take a look at the corresponding photo to this sack (photo 7). You see that gentleman sprawled on the ground about two yards behind where Geno is greeting a quarterback who has nearly assumed the fetal position? His name is Ramon Foster. He is not supposed to be there. He is supposed to be in front of Geno, preventing him from doing the exact thing that he is doing. Sadly, it only gets worse for the Steelers.