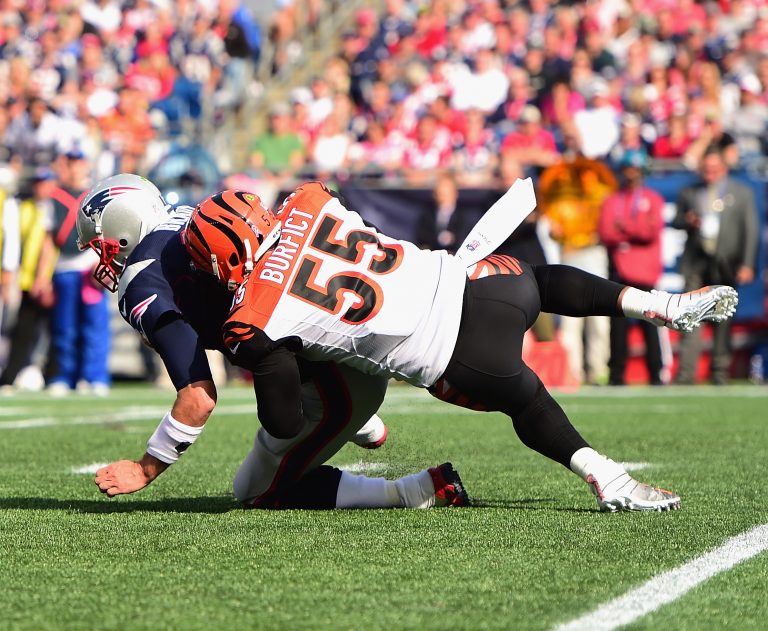 Microfracture surgery, suspensions, league-wide negativity, haunted houses. These are all things that cannot stop Vontaze Burfict. Aside from perhaps his absolutely lights-out 2013 season, the undrafted Arizona State product is playing the best football of his career, and he’s not being recognized enough for it. After being suspended the first three weeks of the season (and playing himself into the shape over the course of the next few games), he’s recorded 62 total tackles in his last five games, 50 of them solo. Tack on a pair of interceptions last week in addition to a career high seven passes defended for the year and you’ve got yourself a one man wrecking crew. But some may ask what exactly makes Burfict such a great player? It’s a question that often goes overlooked when the media and a barrage of fines and personal foul penalties put a negative stigma on you, but the tape shows that Vontaze Burfict is none other than the best inside linebacker in the league right now.

This past week’s game against the Eagles was arguably his best so far, so it’s a perfect time to break down specifics. It’s a performance that allows us to hit on all aspects of his game to give a better idea of the complete package he brings to the Bengals defense. First up is his prowess in the run game, as shown early on in this first quarter play.

The Eagles, lined up in the pistol, are running a stretch play to the left, with the ball going to Wendell Smallwood. Burfict plays this about as well as you can play it, wasting no motion in his path to the running back. You may notice him slowing down as he approaches the guard and sitting outside of his shoulder for just a short moment before making a tackle. This is no mistake on Burfict’s part. As the play develops, Burfict is doing his job to not over-pursue the play and allow Smallwood to cut back. If he shoots straight in on Smallwood and gets him, he may save 1-yard on the play, but if he misses, the back can cut it back up field, leaving Smallwood with only Shawn Williams to make miss before hitting paydirt. It’s the little intricacies like this that are so important for a linebacker to have, and while Burfict is often pointed to as ruthless or even dirty, those labels cover up what he actually is above all else: a technician.

In the past, Burfict has always been stout against the run, but there was a fair case to make that he could be better in coverage. This year, his coverage is making great strides, which, combined with his instincts and experience, allowed him to read rookie Carson Wentz like an open book on Sunday.

Philadelphia lines up in trips, running a “stick” concept. This has the outside receiver running a clearing route, the slot receiver running a quick out, and the tight end (Zack Ertz) running the stick route. The stick is a timing route, meaning that Ertz has the responsibility to get good positioning on Burfict, while Wentz has to make sure the ball is there after he completes his break. This is an extremely tough play for a linebacker to make when the ball is placed well, but Vontaze does a great job of attacking Ertz’s arms. This disrupts his process of making the catch, as there’s no real way for the linebacker to attack the ball itself, and he’s able to force an incompletion.

Frank Reich, the offensive coordinator for the Eagles, ran a lot of quick-read plays to make things easier on Wentz. The problem with those plays, however, is that while they’re easy for your rookie quarterback to run, they’re also easily telegraphed. That’s exactly what happens on this slant pattern to Dorial Green-Beckham.

At the snap of the ball, Burfict takes his read step, noticing Darren Sproles leaking out into the flat to his left, while reading the eyes of Wentz. The rookie stares down his intended target, leading 55 on a beeline to Green-Beckham. Wentz uses his big arm to fire a quick strike to his receiver on what is really a nice pass, but Burfict is able to get to the point of attack and force an incompletion. While both Green-Beckham and Burfict were shaken up for a bit after the play, it was just a good, clean football hit. The Cincinnati linebacker squares up on a fast approaching receiver, puts his shoulder in his chest, and forces the ball out of his hands. Not many NFL receivers would be able to hold onto the ball after taking a shot like that.

But it wouldn’t be right to finish this game without talking about at least one of Burfict’s two interceptions on the day. While the first was primarily just Vontaze being in the right place in the right time after a tipped ball, the second showed great instinct and anticipation.

Coming on an A-gap blitz, Burfict is able to pull up at the last second when he sees the opposing quarterback trying to throw over the middle. Again, the decision from Wentz is not a bad one. On a blitz like this, one-on-one coverage is your best friend, especially over the middle to a reliable tight end. Burfict was just better than Wentz on this play, having the reflexs to make a play on the ball, and then immediately work towards the sideline, shrugging off an offensive lineman to do so. The pick sealed what was a definitive win for a team that has struggled through 2016, and it was perhaps the most fun I’ve had watching a Bengals game this year. The odds of the Bengals scraping back to win the AFC North and reach the playoffs for a sixth straight season are highly unlikely at this point, but this much is true: if the team does turn things around to finish out the season—whether that results in playoffs or not—it’ll be largely because Burfict has stepped up in a major way.