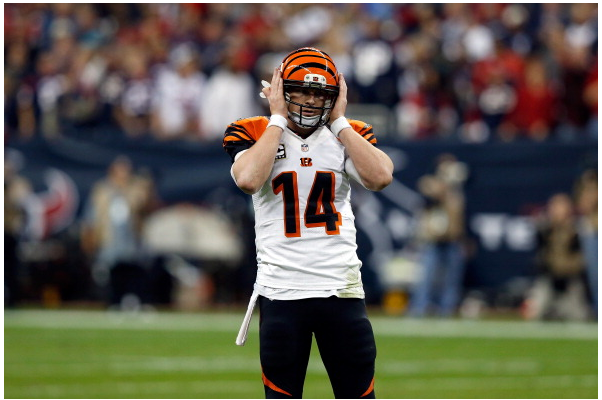 One of the biggest storylines of the Bengals draft selections this year will be if they select a quarterback, who that quarterback is, and where they take him. The general consensus among fans and pundits alike is that the team will go after someone in the middle rounds with a high upside but in need of some time to a) develop their skills and study the pro game, b) recover from injury, or c) avoid reality television cameras. The subsequent consensus—maybe more among fans than the team or pundits or general logic—is that the QB who will undoubtedly be selected in the middle rounds will also serve as Andy Dalton’s eventual replacement, waiting in the weeds for a season with clipboard in hand until yet another first-round playoff disappointment is followed by a triumphant usurping of Dalton’s throne via the absence of a contract extension or poisoning the wine Dalton gulps down to clear way for more of that giant cake full of dead birds.

Taking a QB in the middle rounds isn’t a bad plan. In fact, I’m totally on board with scooping up a Zach Mettenberger or AJ McCarron or Andy Murray or David Fales on Friday or early Saturday. The only problem with this plan is that the chances of landing a replacement that’s better than Dalton among that crop of players is pretty slim.

The Bengals took Dalton with the 35th overall pick in the 2011 draft, three picks into the second round, which is much higher than where the team is projected to take a QB in this year’s draft. Since entering the league, Dalton not only started immediately, but has played in every game of his three-year career, racking up 30 wins and three straight playoff appearances, the latter of which had been done exactly zero other times in franchise history.

Last year, Dalton had his best statistical season to date, finishing 14th in QB rating (88.8) out of 42 total QBs ranked by Pro Football Focus—tied with Cam Newton, just below Jay Cutler, and ahead of Andrew Luck, Matthew Stafford, and Tom Brady. In terms of PFF grades, Dalton’s +4.8 grade for the season put him 17 out of 42, sandwiched between Nick Foles (+5.4) and Colin Kaepernick (+2.7). He was 14th in completion percentage, 7th in passing yards, 12th in yards-per-attempt, and 3rd (3rd!!!) in passing touchdowns. From a purely statistical standpoint, Andy Dalton is in the top half of NFL quarterbacks.

I don’t intend this to suggest that Dalton is clearly the QB of the future for the Bengals. (His 20 interceptions were 5th among those same 42 QBs, he’s thrown one TD compared to six picks in those three abysmal playoff losses, and anyone who watches him week after week would never label him a model of consistency.) I’m not insisting the team would be dumb to do anything other than lock him up with a big-money contract extension before the season that would keep him here for the next five to seven years. In fact, the “Should the Bengals extend Dalton?” storyline that will hover over this team all year like one of Dalton’s airmailed interceptions is a question I’m not sure I have a solution to. There are valid points on both sides of the argument, though for my money, “not extending Dalton because the QB they draft this year will take the reigns” is not one of them.

Since 2004, a year after the Bengals took Carson Palmer with the #1 overall pick, there have been 123 quarterbacks taken in the NFL Draft. Of those 123, only five have won Super Bowls (Russell Wilson, Joe Flacco, Eli Manning, Aaron Rodgers, and Ben Roethlisberger), with Wilson the only among that handful selected later than the first round.

Bengals fans want to find Tom Brady, a diamond in the rough. Every team wants to find Tom Brady. But Tom Brady is the exception to the rule. So is Russell Wilson. Those guys are your ultimate, tip-top, highly unlikely, best-case scenarios for drafting a quarterback IN GENERAL, let alone outside of the first round. So no, Andy Dalton is not an ultimate, tip-top, highly unlikely, best-case scenario. But when your second-round QB starts immediately, racks up 30 wins in his first three seasons, and makes the playoffs in each of them—that’s a pretty damn good scenario. Even if it’s ultimately not good enough.

I’m not sure how the Bengals should handle the Andy Dalton question moving forward. I just know the odds of finding that answer in the middle rounds of this year’s draft aren’t exactly in their favor.