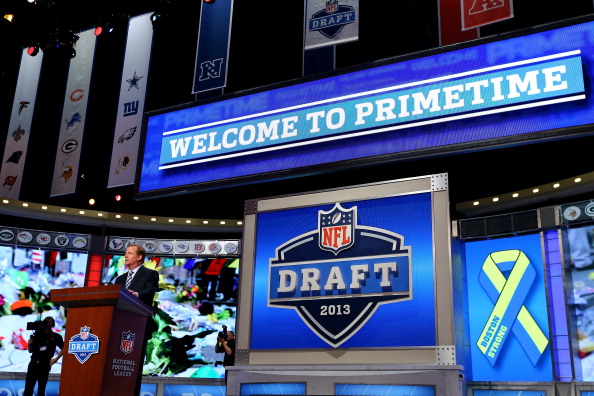 It is a vicious cycle, that of the mock draft. It swings like a pendulum, back and forth between team needs and sensible picks. Readers gobble up the various drafts, 1.0 and beyond, like freshly baked cronuts on an early New York City morning. Unlike the famed flaky delight though, they are rarely digested smoothly. Writers are lambasted by the readers claiming that the fictitious decisions they’ve made in a fake scenario are unequivocally awful. (Or even worse, the poor fan bases from cities like Cleveland and Oakland are filled with the fleeting hope that their team may finally NOT make a terrible decision.)

Still, those same readers will return days—sometimes even hours—later to find out who their favorite team may or may not end up taking. Rinse, wash and repeat for what will have been a three month and six day wait between the Super Bowl and the NFL Draft. (Why the long wait? Because a Rockettes dance show was apparently planned for the last weekend in April, which coincided with Easter this year and the NFL’s previous draft dates. But unless J.C. himself was planning on hitching a ride to NYC to high-step with Pope Francis in the middle of Times Square, methinks the NFL could have muscled the show out of there. The show, by the way, never happened.)

The 2014 NFL Draft, which begins this evening, seems similar on the surface for the Cincinnati Bengals. The team’s only glaring need is at center, hardly a glamorous position even in a year when there are solid prospects to choose from. (This is not one of those years.) The Bengals are pretty good at most positions, great at a few key spots but still in search of playmakers on both sides of the ball. They could draft an outside linebacker-turned-defensive end to help make up for Michael Johnson’s  lost production. They could target a cornerback to inject youth into the secondary. Hell, they could blow up the whole damn thing and draft a quarterback.

The unpredictability of the team’s first-round selection is exciting. Last year, the team seemed intent on surrounding Dalton with any weapons they could to help him succeed, something we saw coming. (10% is not that bad of a percentage, right?) This year, the smart money would be on going with defense early, but it is far less clear. What is clear, though, is that the Bengals have the luxury of upgrading a position rather than filling a void. (Again, except for center.)

So let’s take a look at who those players might be. This is not just a prediction of what position I think they should take or who I think they will take or who I think is the best fit. It’s a combination of all those things, with an emphasis on the selection being somewhat within reason. (I’m being more generous than I was last year, however, seeing as I didn’t pick a running back in Round 2 because I didn’t think it was reasonable that Eddie Lacy would still be available. Silly me.)

So here is exactly, without doubt, what every pick will be for the Bengals in the 2014 draft.

C.J. Mosley, LB, Alabama
I struggled with this pick long and hard. There is ample evidence to suggest the Bengals could go with a cornerback here. They’ve drafted corners in the first round in 2006 and 2007, so to draft another in the first round after taking Dre Kirkpatrick first in 2012 wouldn’t be out of the question. I wouldn’t be entirely opposed to that line of questioning, I just think there is a better intersection of area to upgrade and value. Mosley is going to be an excellent, disciplined linebacker that will allow Vontaze Burfict to roam a bit more. His stock seems to be falling, for whatever that’s worth, so snagging him at No. 24 is not completely out of the picture. Plus, it would mark the beginning of the end to the strange journey/nightmare that is/was movie star Rey Maualuga.

If it’s not Mosley, I think the Bengals are in a good position to trade down with a team looking to draft a falling quarterback. And if they can, go for it, because this is a good draft for stockpiling picks.

Marcus Martin, C, USC
The Bengals need a center and Martin is generally regarded as the top center prospect. But the real question for the team is this: how much better is Martin than the next best center? If they think he is significantly ahead of the next guy, then it makes sense to take him here because he will not be around in the third round. But you know who could be? Weston freakin’ Richburg. He’s a center from Colorado State that grew up on farm in a small Texas town that he likened to the fictional football powerhouse of Dillon, showed pigs as a middle schooler, and once snapped with the OPPOSITE HAND because his other hand was broken.

Even with all that said, it’s not likely that Richburg would last until Round 3 and the Bengals can’t risk waiting and missing out on one of the few starting-caliber centers available. And on the plus side, Martin does have a tremendous butt roll.

Lamarcus Joyner, CB, Florida State
Most have the Bengals addressing cornerback with their first round pick. But while I understand the temptation to draft one of the many highly-rated corners, I think they could get a ton of value if Joyner falls this far. He’s undersized at 5-8, 184 pounds and not blazingly fast (4.55 40-yard dash), but he made a ton of plays for an excellent Florida State defense. He is an adept blitzer, and if the Bengals have some trouble generating a pass rush without Johnson, new defensive coordinator Paul Guenther may be more likely to blitz with a nickelback than Mike Zimmer was. He’s an absolute steal if he lasts this long and I think he’ll be able to do things no one in that secondary can do. Also, he went to the same high school as Gio Bernard and Geno Atkins. Time to get the band back together.

Trent Murphy, DE, Stanford
Murphy is your classic low ceiling, high floor prospect (a label that often seems to be reserved for overenthusiastic white guys from smart schools). Margus Hunt is a long way from being able to contribute regularly, however, and I think Murphy could do well as a pass-rushing specialist as a rookie. He was an outside linebacker in college, but I think he has the frame (6-5, 250) to play as a defensive end. Some sites have him projected closer to the third round range, but he would be a value in round four. Also, he’s a ginger, which would be yet another olive branch from management to Andy Dalton.

John Brown, WR, Pittsburg State
I could tell you this was purely for football reasons, that the diminutive, small-school receiver could replace some of what Andrew Hawkins gave the offense. I could convince you that his outstanding college production and return versatility make him an underrated commodity. I could admit that I really struggled to choose either him or Oregon receiver Josh Huff and ended up choosing Brown because I saw Huff as more of an undersized Z-Receiver (flanker) than a true slot receiver.

But it would all be a lie. I just want to be able to overuse this clip like crazy. And it may not be out of the question that we have a weekly ‘John Brown Hind Parts’ post in this space. Please make this happen, Mike Brown.

Tyler Gaffney, RB, Stanford
Gaffney decided after the 2011 season that he’d try his hand at minor league baseball, so he decided to drop football in 2012 and focus on baseball. Then he said, ‘Nah, let’s try this football thing again.’ And he ran for 1,709 yards and 21 TDs when every team knew he was going to get the ball. I want a guy on my team that is just good at sports. Also, Russell Wilson played/could’ve played/might’ve played baseball once and he just won a Super Bowl. Ipso facto, Tyler Gaffney will lead the Bengals to the promised land.

David Fales, QB, San Diego State
The team needs a backup plan for Andy Dalton and Fales is generally perceived to be a great leader with tremendous character and work ethic. All good things. His downsides are the physical attributes, but in the sixth round those are to be expected.

Dex McDougle, CB, Maryland
We would always remember that time when the Bengals drafted the guy whose name sounded like he should star in an Irish cop procedural. Also, take a flier on an injured guy with potential.