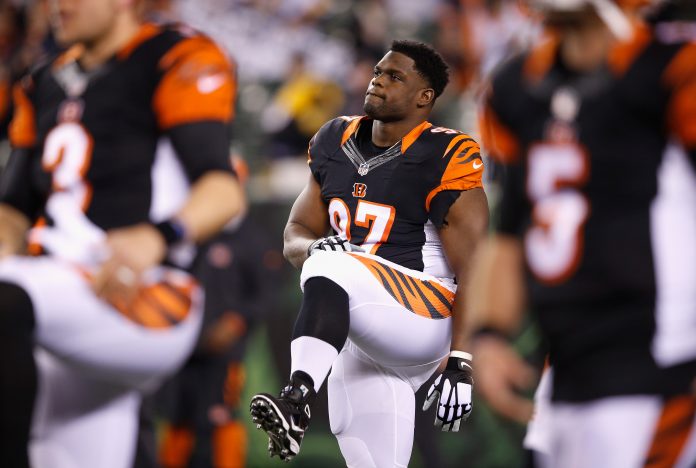 The Bengals are on a two-game win streak, and it’s a product of many pieces coming together in the last couple of weeks. Tyler Eifert provides a boost in the red zone, Andy Dalton is in sync with his rookie receiver Tyler Boyd, and the defense is hitting it’s stride at the right time. (Also, the Browns.) Perhaps the most understated of these pieces is the defense. In a league built around high-powered offenses, Paul Guenther’s defense has allowed 21 points or less in every game since coming off the bye in Week 9. A big part of that has been Vontaze Burfict, who I covered in great detail last week. However, the most underrated and unsung part of the defense has certainly been Geno Atkins. While not putting up the starry-eyed numbers of previous seasons, Atkins has continued to put in consistent and effective work that causes trouble for opposing offensive fronts.

It feels strange to call an All-Pro like Atkins underrated anymore, but it still holds true in 2016. In recent seasons, the Bengals defensive front often feasted on enemy quarterbacks, and the mainstream media soon caught on that Atkins was the catalyst of that. But with the various issues and complications the Bengals have faced this year, he’s often glanced over as an afterthought. Make no mistake, Geno is alive and well. With a weak supporting cast on the defensive line (Carlos Dunlap excluded) the statistics of previous seasons aren’t there, but the proof is on tape.

Here’s Atkins showing some great pass rushing skills against Cleveland on an early third down play. He starts head up over the left guard, with a tough assignment to work over the face of the center to bring a rush from the right side. Not exactly an easy thing to do, yet he completely blows up the center straight in the direction of a waiting Robert Griffin III to force an incompletion (which should have been an interception). Not many NFL defensive tackles could achieve this—yes, even against the Browns (which I know you were thinking). But it’s not all push rush for Atkins, because the former Georgia Bulldog has also been stout in the run game.

Here’s a routine run stop, but it’s a play that adds diversity to Geno’s game. There are a good number of decent pass rush 4-3 defensive tackles in the league, but you don’t last long in the NFL as a one-trick pony. It’s this ability to come in on your rush, find the football, and scrape to the running back that adds years to an NFL career. By crossing the right guard’s face to attack the center, Geno is closing the hole for the running back and buying him extra time to get off his block. That’s a combination of great scheming by Paul Guenther along with even better execution by Atkins.

However, it’d be criminal to cover Geno after this Browns game without talking about his back to back sacks on RG3 in the fourth quarter, particularly this first one.

This is a simple, straight rush from the three-technique here for Atkins. It’s sort of fitting that this is his first sack, as this skill is what made him a known quantity and is still what he does best. It starts off with a great job of attacking the lineman while not letting himself get too outside, resulting in a poor chip effort from the running back before he takes his route. Once the back is clear, “Geno Sacks” throws the guard aside and feasts on a flustered RGIII. It doesn’t always have to be pretty. Sometimes good, simple technique is all you need to rack up big plays in the NFL, which can at times go unnoticed in a league that can overcomplicate things for the sake of being creative.

This second sack is bit wilder. It’s just a tremendous job of tracking the play and keeping contain on the quarterback. He may not be the same player he was before his devastating knee injury, but Griffin is still a capable runner when given the opportunity. You can see Geno strafe and shuffle around the line of scrimmage, moving with Griffin to not allow him an edge to take off. The defensive ends crash hard and try to wrap up Griffin, but aren’t able to take advantage of the opportunity. Atkins’ spying does great work here because he’s able to pick up the scraps for his second sack of the game.

Geno is a complete defensive tackle, and though his stat line isn’t bursting at the seams like it has in years past, he’s just as productive as ever. Certainly his work is going to be tougher this Sunday against a solid Steelers offensive front, but with 97 and 55 on their game, this weekend looks a bit more promising for a rallying Bengals defense.