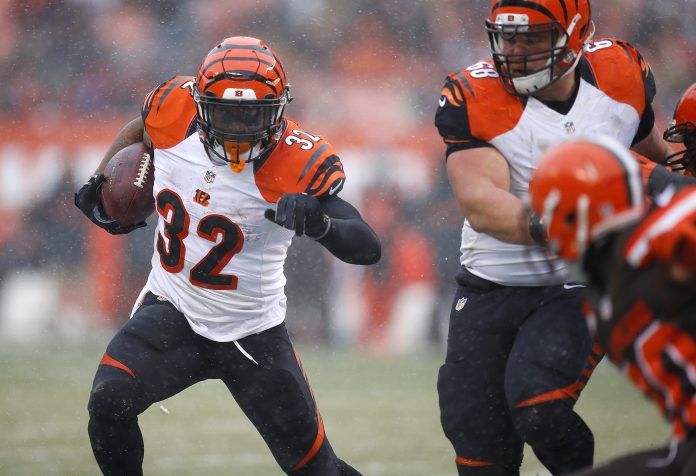 Who is Jeremy Hill?

Is Hill the tour-de-force from the latter half of his 2014 rookie season that carried a beat-up Bengals offense (no Marvin Jones, no Tyler Eifert, a dinged-up A.J. Green) to the tune of 720 yards rushing and almost six yards-per-carry over the final seven games of the regular season?

Is Hill the regressed version of himself that showed up in 2015, when his yards-per-carry average decreased by 30 percent and his season was defined by a crippling playoff fumble?

Or does the truth surrounding Hill’s career come with various shades of gray? His 2016 season has been an improvement on 2015, but are his numbers just inflated from shredding the winless Browns (34 rushes, 279 yards, 8.2 yards per carry)? He’s only averaging 3.2 yards per carry on 161 rushes vs. non-Browns opposition.

What kind of running back is Hill, and who has he become since his exemplary rookie year? Let’s begin with some basic statistics.

(All stats are regular-season numbers. Hat tip to ESPN and Pro Football Reference for their extensive databases.)

With regard to raw yardage and yards-per-carry, it’s clear that Hill has regressed from his rookie season. Hill’s YPC average ranked 45th out of 47 qualified running backs in 2015, a massive drop from his sixth-place showing in 2014. (Meanwhile, Gio Bernard averaged 4.7 YPC on 69 fewer carries in 2015, good for 10th in the NFL).

Not to go full Johnny Raincloud on Hill, but even his touchdown numbers are flawed. Nine of Hill’s scores have come from a yard out, and a whopping 17 of those TDs have come from the one, two, or three-yard line; just seven of Hill’s scores have been runs from outside the nine-yard line. To play devil’s advocate on myself, one could also make the argument that by racking up short-yardage scores, Hill has at least distinguished himself as a valuable goal-line back.

One explicit positive is Hill’s focus on taking care of the ball. As a rookie and second-year player, Hill was on the receiving end of multiple in-game benchings from Marvin Lewis for his fumbling foibles. (You’re killin’ me, Petey!)

Ok, let’s dig a bit deeper. These next set of numbers examine the notion that Hill’s production suffers when he doesn’t receive a sizable amount of carries.

For his career, Hill is (barely) below his yards per carry average when he receives under 15 carries per game. But in 2016, Hill appears to be succeeding sans a heavy workload. I know, I know: #WellActually those numbers are thrown off by Hill’s first game against the Browns, where he ran for 168 yards on nine carries; in every other game when he has carried the ball less than 15 times, Hill has averaged no better than 3.4 YPC.

So what happens when Hill is force-fed the pigskin?

So what about the Hill’s ability (or inability) to break off big runs? And the notion that he runs better out of the I-formation with a lead blocker, a power-oriented formation he thrived in during his college days at LSU? Well…

Hill’s propensity for chunk runs has diminished significantly since his rookie season, as he’s notched nearly as many 10-yard runs over the past two seasons as he did in 2014. Hill’s declining efficiency out of the I-formation is also notable, even with a smaller sample size over the past two years. Could it be that the Bengals are telegraphing their intentions whenever they line up in the ‘I’?

It’s worth noting that over the course of Hill’s three years with the team, the offense has gradually become more pass-heavy. In 2014, the Bengals passed on 51 percent of their plays. Last season, that number nudged up to 52 percent and has swelled to 56 percent in 2016. The Bengals inconsistent offensive line hasn’t done Hill any favors in 2016, either. Through Week 13’s contests, Football Outsiders slotted Cincinnati’s O-line as the league’s No. 22 run-blocking unit and ranked them 21st in stuff rate, which demonstrates how often ball carriers are stopped at or behind the line of scrimmage. However, Hill also struggled in 2015 despite the Bengals offensive line topping FO’s run blocking rankings, while also coming in third in stuff rate. Even curiously-er, in 2014 Hill performed very well behind a line that was No. 11 in run blocking and third in stuff rate. In other words: ¯\_(ツ)_/¯.

By numerous metrics, Hill has regressed appreciably from his rookie season in spite of working behind mostly above-average offensive lines. While there is evidence to support a correlation between Hill’s production and the amount of carries he receives, the 24-year-old’s lack of explosive runs and his declining performance with a lead blocker indicate he may simply be a below-average to average NFL running back who overperformed during the second-half of his rookie season.

With the Bengals having already locked up Bernard—the 25-year-old inked an extension this past offseason that will keep him in Cincinnati through 2019—Hill’s days as a Bengal could be over beyond 2017, the last year of his rookie contract. (Though I wouldn’t expect him to be moved before then.)

Cincinnati’s front office rarely engages in trades and often stands by players far past their expiration date. (See: Hunt, Margus). Plus, Bernard’s availability for the start of the 2017 season is in question after a recent ACL tear, and third-string running back Rex Burkhead is also an impending free agent. The Bengals will harbor renewed playoff hopes next fall (assuming they’re being realistic about this year’s), so an organization that favors stability isn’t about to throw an entire position group into upheaval prior to a season that doubles as Lewis’s final year under contract.

So, stay tuned. In the meantime, keep an eye on how Hill finishes the season against three good defenses (Steelers, Texans, Ravens) and hope his touchdown celebrations continue to pay homage to the great J.R. Smith.