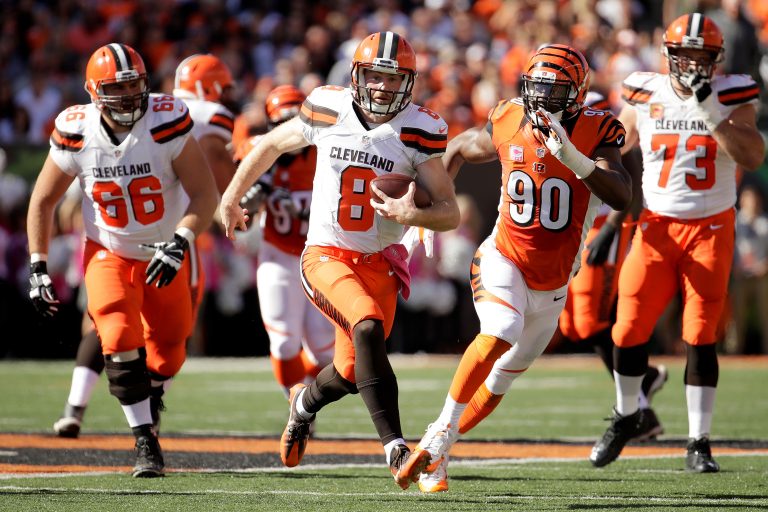 The Cincinnati Bengals offense looked absolutely electric in Week 7. With over 270 yards on the ground and another solid performance through the air, it seemed like everything was going the Bengals way on Sunday. It might even have a lot of fans full of confidence going into a big Week 8 showdown with the Redskins in London. However, there were some glaring weaknesses in the Bengals game on Sunday that can’t be ignored. First, the special teams looked sloppy. That’s uncharacteristic of this team for the most part, so we can chalk it up to a fluke. But with the Western world having an opportunity to see the Bengals this Sunday, something needs to be done with that absolutely abysmal run defense.

Cleveland, specifically Isaiah Crowell, ran well to begin the year, but were exposed the last few weeks. That was, at least, until they played Cincinnati. In Week 5, the Browns leading rusher had 22 yards, then that number was down to 18 in Week 6. Against Cincinnati though? That number jumps all the way up to 104. Making matters worse is that the 104-yard performance came from backup quarterback Kevin Hogan, who is approximately the 29th quarterback to play for Cleveland this season. Crowell also had 12 carries for 63 yards and a touchdown on the day. So let’s start small, by looking at how Crowell found a magical return to form against this 24th ranked Cincinnati run defense. This one particular play is pretty indicative of how the Cincinnati front seven has been treated far too often in 2016.

Notice that there really isn’t a ton of work to be done by the running back himself. The Browns offensive line completely washes out all of the defenders in this zone-blocking scheme, and all that’s left is for Crowell to hit the cutback lane and get up to speed. Keep in mind too that this is an offensive line that is missing notable players Alex Mack and Mitchell Schwartz, who both left for greener pastures in the offseason. Joe Thomas aside, this is a ragtag gaggle of nobodies up front that are pushing the Bengals around. Crowell isn’t even touched until he’s 5 yards downfield, and even then it’s simply Carlos Dunlap barely getting a finger on him as he rolls for another 16. All in all it’s a gain of 21, and it paints a familiar picture of the Cincinnati defense getting bullied at the line of scrimmage.

Cleveland came into the game with Cody Kessler as the starter and Kevin Hogan his backup, with the latter being recently signed off the team’s practice squad. But even before Kessler ended up leaving the game with a concussion, Hue Jackson was using Hogan as a change of pace quarterback to take advantage of some aggressive Cincinnati defensive ends. Having served on the Bengals offensive and defensive staffs in recent years, if anyone would be able to exploit the team as a whole, it’s Hue. He did so with great success by running the read-option for the entirety of the matchup, with Cleveland more often than not winning that battle.

This play is typically what you expect when running the read option, as it’s the most familiar and commonly used version. The tailback is to the weak=side of the offense. Everyone on the line of scrimmage is running a zone-blocking scheme to the right, making sure to leave the end man on the weak-side of the line unblocked. This gives the offense one less person to block, and then it’s the quarterback’s job to read that defender and take him out of the play. If the defender (in this case, Michael Johnson) is aggressive and crashes on the running back, the quarterback will pull the ball away and keep it, as Hogan did on the play above. Conversely, if the defender expects the option and waits for the quarterback, then Hogan would just leave the ball for the running back and the team runs an inside or outside zone, depending on the blocking. Cincinnati defensive ends were crashing on this all day.

This is a variation of that weak-side option, but this time from the strong side. Because it’s a strong-side option, the roles are reversed. If the end stays like he’s taught to do, which Carlos Dunlap indeed does, the quarterback is keeping it on an inside zone. On a play like this, it’s the linebacker’s responsibility to fill the hole and stop the quarterback, while the defensive end is tasked with keeping contain to stop the running back. Dunlap fulfills his part of the duty but Vontaze Burfict does not. Burfict over pursues because he’s reading the tailbacks. This leaves Cleveland’s right tackle free to pick him up and prevent any chance of Burfict recovering on the play. This lane is so big that I firmly believe any high school quarterback in the country could have gotten the same amount of yardage as Kevin Hogan. The Browns aren’t a very good team in terms of talent right now, but Hue Jackson schemes well and takes advantage of a poorly disciplined Bengals defense as a result.

Finally, I think it’s worth mentioning how the defensive line is opening up running lanes even in the passing game, as evidenced by Kevin Hogan’s touchdown scramble.

Kevin Hogan is playing in his first NFL action in this game. He threw for exactly 100 yards and had two interceptions. He proved all day that he wasn’t comfortable throwing. As a defense, you must keep him in the pocket at all times. The guy isn’t going to turn down a chance to run, doubly so if he doesn’t feel comfortable putting the ball in the air.

Margus Hunt, for as far as he may have come in 2016, still has obvious flaws to his game. I’m sure he’s had this preached to him multiple times over his many years in the league, but it seems like he just doesn’t get the idea of gap integrity. Both he and Domata Peko take outside pass rush moves that open up a running lane like Moses parting the Red Sea. Some of the blame can be placed on Peko, but the drastic overpursuit by Hunt puts most of the blame on him. Hogan takes his drop back, sees his man is covered, and runs without hesitation because he knows what he has. This defense certainly wasn’t drawn up to have a 5-yard gap in the pocket for the quarterback to step into, but it’s what they gave him.

This Sunday, Cincinnati faces another familiar face in Jay Gruden. The difference is the team that Gruden fields is far more talented, and boasts one of the better offensive lines in the league. I doubt we’ll see Kirk Cousins running any read option plays on Sunday, but Gruden will know how to scheme what he wants to have open up. It’s going to be up to this defense to play with more discipline and integrity than they have in the past. It’s one thing to play aggressive, but it’s a whole different beast when you do it sloppily like the Bengals tend to do now. I think they can get things fixed, but we’re at the halfway point in the season, so I guess the question is: If not now, when?