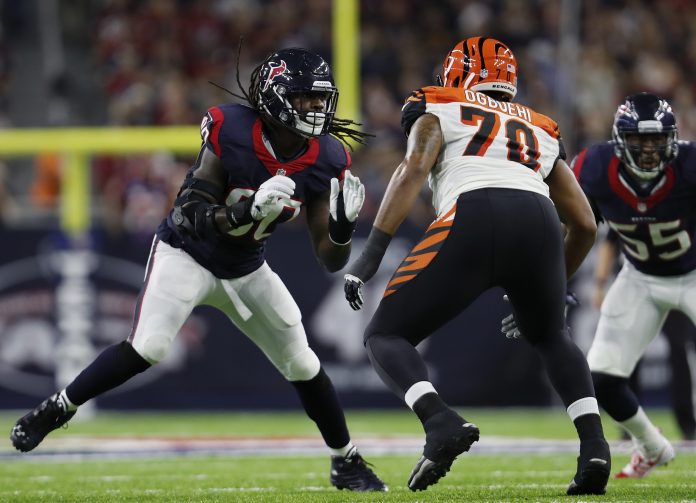 Coming into the Bengals 2016 season, one of the buzzing topics was the departure of longtime right tackle Andre Smith and how the team would replace him. By spending first and second round picks on Cedric Ogbuehi and Jake Fisher, respectively, in 2015, the Bengals hoped to solidify their offensive line for years to come. After spending little to no time on the field in his rookie season, Ogbuehi was given the starting right tackle position for Week 1 2016. As we all learned, it was an absolute disaster. Ced was bullrushed relentlessly and beaten consistently, later being put in a rotation with veteran Eric Winston before losing his job altogether. Eventually Jake Fisher was given the reigns at right tackle and performed marginally better than Ogbuehi. However, with the recent injury to starting guard Clint Boling, a window opened for Ced to slide to left tackle while Pro Bowl tackle Andrew Whitworth moved to guard for the final weeks of the 2016 season, including Christmas Eve against the Texans.

In short, it wasn’t pretty. At times it was downright hard to watch, but with young offensive tackles that don’t have much experience against a premier defense, maybe it was to be expected. I want to focus on Ogbuehi, as he’s a chief concern of the team moving forward by virtue of being a first round pick. But first, a quick look at Jake Fisher on the right side.

Fisher struggled mightily, as you can see here. Whitney Mercilus and Jadeveon Clowney are no slouches as pass rushers, and they made the Bengals young tackles pay. Here Mercilus just out-paced Fisher, beating him to the outside and using some excellent hip bend to meet Andy Dalton at his drop. This was a common sight to see throughout the game, as Fisher was just too slow for Houston’s speedy edge rushers, which is becoming a common problem for most teams in the NFL. The common strategy in the NFL is to have your more agile tackle playing left, as historically that’s where the defenses best edge rusher would be. Then your right tackle would be more of a large, road-grader type that would plow forward in the run game. This is why most teams tend to run to the right side of the offensive line. The right is typically considered your “power” side while the left is more finesse. In today’s NFL though, defensive players move around much more than they did even 10 years ago, meaning you might not be able to get away with putting a larger, slower tackle on the right side anymore.

Moving on to the former Texas A&M standout Ogbuehi. It wasn’t all bad from the guy, as some breakdowns I’ve seen would lead you to believe. He played a better game than Fisher, which isn’t saying much, but there are signs of promise of how good he can be if he continues to develop. For example, take this second quarter play where he latches onto Jadeveon Clowney–who had an incredible year for Houston—and completely neutralizes him.

The advantage Ogbuehi has over a guy like Fisher is his athleticism. He’s quicker and has better hand technique, which is a perfect skill set to take on the quicker pass rushers in the NFL. That said, he’s nowhere near as strong as Fisher is at holding ground and is often susceptible to being bullrushed straight back into the quarterback. Those plays are much more noticeable than all the good plays Ogbuehi had against the Texans, which is what people tend to notice in retrospect.

This guy definitely needs some time to develop. In fact, one of the all-time great Bengals offensive lineman, Willie Anderson, has publicly stated multiple times he’d like to work with Cedric in order to help him develop. The only problem is that Anderson has said he doesn’t want to be a full time coach and the NFL’s current rule system isn’t lenient towards consultants, which is essentially what Willie wants to be. In any case, it’s not going to be an overnight process for these guys to turn into acceptable starters. Plenty of linemen have a rough first year of starting in the NFL, and people get caught up in the sense that they need immediate gratification from their picks. But in reality, it doesn’t work that way. (See: Smith, Andre) It may be tough to deal with and fans may not like the reality of it, but not every draft pick is an A.J. Green. That doesn’t mean Fisher and Ogbuehi won’t become solid players in their NFL career, but it does mean that patience is necessary.