Home Sports Football The Bengals Have a Plan. They’re Just Bad At It. 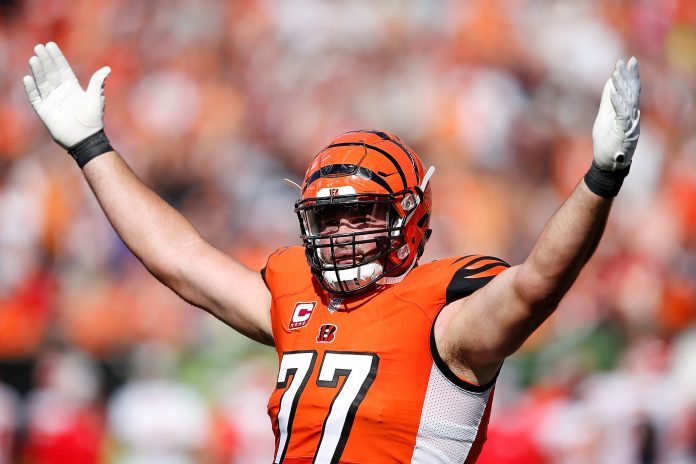 “I respect the whole Brown family with how they run their organization,” departing Bengals offensive guard Kevin Zeitler told The Cincinnati Enquirer, upon signing a 5-year, $60-million deal with the Cleveland Browns. “They have their blueprint and they stick to that and it’s worked out well for them.”

The Bengals do have a blueprint, one that Brown and Marvin Lewis and Duke Tobin and the team’s entire brain trust has not been shy about in recent years: draft and retain. It gets trotted out every year when free agency comes around: The Bengals don’t plan to make any big, splashy signings. They prefer to keep and reward the guys they have.

And for the past decade or so, it’s been a pretty good strategy. After decades of early-round busts and disappointments, the team has drafted well overall of late, landing starters and major contributors with a wide range of picks. Until recently, they’ve been able to retain most of those selections as well. A few have slipped through the cracks—Jonathan Joseph, Andrew Hawkins, Michael Johnson (for a hot second)—but they were the anomalies. The Bengals made it clear they were willing to pay market value for their guys—Andy Dalton, AJ Green, Carlos Dunlap, Geno Atkins, Giovani Bernard, Vontaze Burfict—and honor the length of those contracts.

Now, the plan has stalled. This is partly due to a dip in the team’s drafting success, or at least in the speed of positive returns; this is also understandable. The NFL draft is basically a crapshoot. For as much of a hot streak as the Bengals appeared to be on for a few years, it’s only reasonable that it eventually lapsed. Which is why the shortcomings in regard to the other half of the blueprint—retaining those players they were able to develop—have been so glaring. Marvin Jones, Mohammed Sanu, Andrew Whitworth, Kevin Zeitler, Rex Burkhead—all homegrown, talented, productive players, all lost to free agency the past two offseasons. The Bengals organization has committed itself to a two-pronged approach. Right now, they suck at both of them.

There are excuses for all of these departures. Jones was offered equal money, but he wanted to be a #1 receiver. Sanu was overpaid. The Bengals don’t value guards to the tune of Zeitler’s new deal. The team doesn’t want to invest that much guaranteed money in a player of Whitworth’s age. Burkhead was basically born to play for the Patriots. It’s mostly money related, and it’s mostly bullshit. I’m far from the first to make this point, but players don’t get paid what they deserve; they get paid what the market values them at. And the Bengals have cap space—a (generally positive) byproduct of how they approach free agency. By most accounts, the team made efforts to keep Jones and Whitworth, but basically punted on Zeitler, Sanu, and Burkhead. This, however, also shows a troubling level of shortsightedness. In focusing on one player at a particular position group each of the past two years (Jones and Whitworth), it gave them no safety net or backup plan once they came up short. So in the end, they lost all of them, and the team was, is, and will continue to be noticeably worse off because of it from a performance standpoint. Current players are taking notice, too.

The most confounding aspect to all of this is that the Bengals are actually failing at the easiest part of the process. Drafting and developing talented players is a difficult thing to do in the NFL. The reason some of these guys are getting fat contracts on the open market is that the Bengals have succeeded in this area…except those efforts are irrelevant when they aren’t the ones putting up the money to retain them. The plan only works if you follow it. The emperor has no clothes because he won’t spend the cash to buy them.

The Bengals drafted Andrew Whitworth out of LSU in the second round of the 2006 draft. After a few productive years at left guard, the team moved him outside in 2009, at which point he developed into one of the best left tackles in the NFL. He made Second-team All-Pro in 2014 (when he allowed zero sacks and only one quarterback hit all season) and First-team All-Pro in 2015. He made three Pro Bowls, including last year. Kevin Zeitler was drafted in the first round of the 2012 draft. The Bengals took initial flack for opting for Zeitler over fellow guard David DeCastro (who went to the Steelers), but were soon vindicated by Zeitler’s stellar play and durability.

Both players proved to be steady, valuable teammates and locker room leaders. Both players scored big this offseason—Zeitler landing the biggest contract for an offensive guard in NFL history, Whitworth getting $36 million for 3 years, $15 million guaranteed, despite turning 36 this December. Neither will be playing for the Bengals in 2017.

Justin Williams is a Senior Editor at Cincinnati Magazine. You can follow him (along with a lot of other Bengals fans freaking out over free agency) on Twitter at @Williams_Justin.