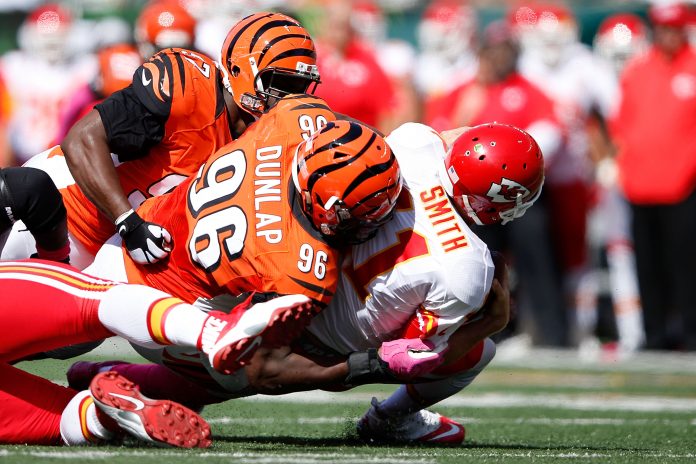 The successes and failures of Marvin Lewis’s second act with the Bengals will always walk arm-in-arm with the 2011 NFL draft and the selections of A.J. Green and Andy Dalton in rounds one and two, respectively.

And yet, the defensive foundation of the team that won 52 games and advanced to the postseason every season from 2011-15 was laid a year earlier with the drafting of Carlos Dunlap (second round) and Geno Atkins (fourth round). The two defensive linemen have since combined for two All-Pro selections and five Pro Bowl berths.

Seven years later, the former University of Florida (Dunlap) and University of Georgia (Atkins) standouts could use a helping hand or two. Two of the three members of the ‘Fisher-Price Package’ (along with Michael Johnson, a 2009 Bengals draftee), Atkins and Dunlap remain effective, but as the numbers will indicate, the Bengals are a better defense and manage to sack opposing quarterbacks with greater frequency when the pass-rushing burden is dispersed among many.

Over the past seven years, the Bengals have more or less fielded average to above-average defenses, with occasional swings toward exceptional (2013) and inadequate (2010, 2016). But how do these statistics relate to Atkins’ and Dunlap’s importance to the Bengals ability to sack the quarterback?

Over the past three seasons, the Bengals defense has become increasingly reliant on the exploits of Atkins and Dunlap, with the two racking up over half of the defense’s sacks. That’s a passable strategy—if Atkins and Dunlap are performing at an all-league level like they did in 2015, when Atkins was named first team All-Pro and Dunlap was fourth in the league in sacks. This line of thinking has proven to be a less palatable plan of action in 2014 and 2016, with the Bengals ranking dead last in the league in sacks three seasons ago and in the bottom third of the league this year. From 2011-13, the Bengals defense was a vigorous pass rushing faction because the unit did not rely solely on Atkins and Dunlap.

In 2011, Atkins (7.5 sacks) flourished in his first season as a full-time starter, but was backed up by Jonathan Fanene (6.5) and Johnson (six). Dunlap, Frostee Rucker, Chris Crocker, Domata Peko, and Robert Geathers also combined for 17 sacks. A season later, Atkins (12.5 sacks) and Johnson (11.5) were supported by Wallace Gilberry (6.5) and Dunlap (6). Geathers, the ageless wonder, chipped in with three sacks.

In 2013, it was Dunlap and Gilberry leading the charge with 7.5 sacks apiece. Atkins had six sacks when he blew out his knee in the team’s ninth game; extrapolated over a full 16-game slate, he was on pace for 11. In 2013, four other players (Johnson, Peko, Vinny Rey, Vontaze Burfict) notched at least three sacks apiece.

Compare those seasons with 2014 (when Atkins and Dunlap were the lone Bengals to log more than 1.5 sacks) and the current campaign, when Atkins and Dunlap have been good, but not quite as dominant, and the supporting cast has failed to step up. (In a clear sign of desperation, the Bengals re-signed the now-32-year-old Gilberry in early November, a move that reflects unfavorably upon Margus Hunt and Will Clarke, a pair of recent highly drafted defensive linemen who haven’t panned out.) Even in 2015, when Dunlap notched a career-best 13.5 sacks and Atkins registered 11 QB takedowns, the Bengals tallied 42 sacks, just the fourth-best total over the Atkins-Dunlap era.

The Bengals window to win a championship—or at least, you know, win a playoff game—with their current core of stars (Dalton, Green, Dunlap, Atkins, Burfict, Tyler Eifert, Andrew Whitworth) is not closed—but the end is nigh.

At the start of the 2017 season, Dunlap will be 28. Atkins and Green will be 29. By the end of September, Eifert (slated to undergo back surgery soon) and Burfict will be 27. Dalton turns 30 next March. Whitworth turned 35 earlier this month.

An injection of urgency into the franchise’s normally-tepid offseasons is needed for 2017; an offseason focus that favors retention and bargain hunting rather than searching for immediate upgrades via the draft or free agency will not be enough to push the Bengals back to contender status. (Just ask the 2014 and 2015 Reds.)

There are more than a few holes on this team to be filled, but supplementing the pass rush around Atkins and Dunlap ranks among the biggest craters to be conquered. Risks need to be taken.

On Thursday morning, Lewis unequivocally said he will return in 2017 and fulfill the last season of his contract. One would think that for Lewis, the weight of a potential lame-duck season, a disappointing 2016, and an 0-7 playoff record would be enough to convince other Bengals decision-makers to mesh frugality with a few doses of audacity this offseason.