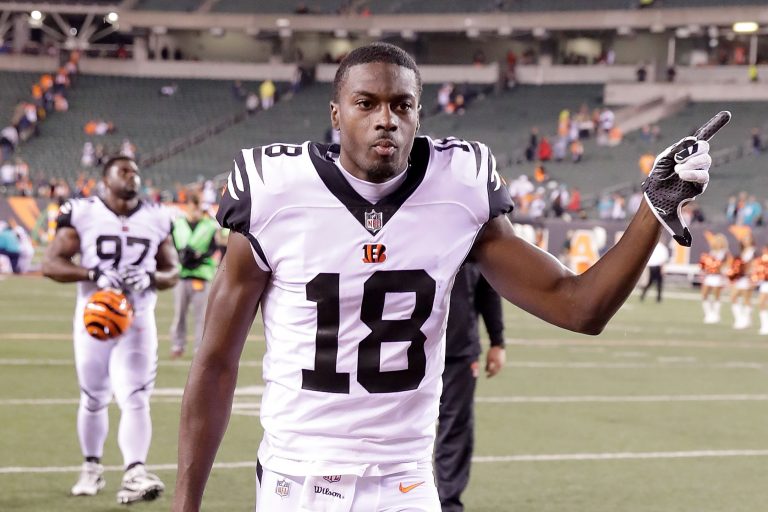 In as much of a “must-win” scenario as can exist in Week 4—earlier in the week, A.J. Green referred to the game as a “gut check”—the Bengals moved to 2-2 by mostly toying with the Miami Dolphins on Thursday night before a rain-weary crowd. Cincinnati was plus-two in turnover margin, plus-11 in first downs (19-8), and plus-140 in yards gained. On the flip side, the final score was 22-7 instead of 42-7 because the Bengals were woeful on third downs (3-of-15, almost as bad as Miami’s 2-for-11 showing) and registered just one touchdown in five trips inside the Dolphins 25-yard line.

The Bengals have played the first four weeks like a team that experienced major personnel and coaching turnover during the offseason. A game’s difference sounds meaningless, but 2-2 is far more appetizing than 1-3 with back-to-back road games at Dallas and New England approaching in the next two weeks.

Despite another uneven game as a team, there were three sparkling individual performances by the Men in White:

*Green outgained the Dolphins 166-152 through three quarters, with the wide receiver’s shining contribution coming late in the first quarter when he racked up 77 of the 90 yards on the Bengals lone touchdown drive. Green finished with 173 yards on 10 receptions, most of which came by feasting on second-year cornerback Tony Lippett, who chiefly played wide receiver in college.

*Mike Nugent took advantage of the Bengals red zone foibles, converting all five of his field goals to surge into the league lead with 12 made kicks.

The other major storyline was the return of the previously-suspended Vontaze DeLeon Burfict, co-architect of the latest January Meltdown and object of Conor McGregor’s affection. Burfict’s impact on the game was relatively muted (three tackles, one deflection) as the Bengals curtailed his snaps in his debut, but the walking 5-hour Energy shot undeniably provides the defense with an injection of vigor. (We’ll see if Burfict can manage to contain his propensity for loco behavior at ill-timed moments.)

At least for one night, the Bengals returned to their former vice-grip ways on defense—Cincinnati was second in the NFL in points allowed per game in 2015—ruthlessly victimizing a depleted Dolphins offensive line that was missing its starting left tackle and its top two centers, finishing with 10 quarterback hits, six-and-a-half tackles for loss, and five sacks. Per Pro Football Focus, Miami quarterback Ryan Tannehill was 3-for-10 for 29 yards with a QB rating of Blutarsky when pressured on Thursday night. The combination of the Bengals defensive dominance and the Dolphins shortcomings resulted in an impressively feeble showing by the Miami offense, which logged a fumble, an interception, a turnover on downs, and seven punts (in addition to one broken-coverage touchdown) on its 11 drives.

Through four weeks, the 2015 Bengals were plainly special, in part due to forces out of their control (no major injuries, the Ravens collapsing, etc.). The 2016 Bengals remain a downgraded version of that team, and in more than one way, that sentiment won’t change.

Over the offseason, the Bengals lost their starting right tackle from the past half-decade (Andre Smith), a pair of wideouts who played right away when they were drafted in 2013 (Marvin Jones, Mohamed Sanu), their well-respected and savvy offensive coordinator (Hue Jackson), and position coaches at all three levels of the defense (line, linebackers, secondary). Pro Bowl tight end Tyler Eifert needed surgery on his ankle after rest wouldn’t heal the injury. Burfict got himself suspended for three games, missing a pair of forays against two of the NFL’s better outfits (Steelers, Broncos).

And again, the schedule does not let up. A week from Sunday the Bengals visit the Cowboys having not won in Arlington since 1988. The next week brings a trip to New England, and Cincinnati hasn’t won in Foxborough since 1986.

I still think the Bengals are steak-and-potato good. But it may take awhile to know for sure.

—
Grant Freking writes for Redleg Nation, Land-Grant Holy Land, and is a regular contributor to Cincinnati Magazine. You can follow him on Twitter at @GrantFreking.