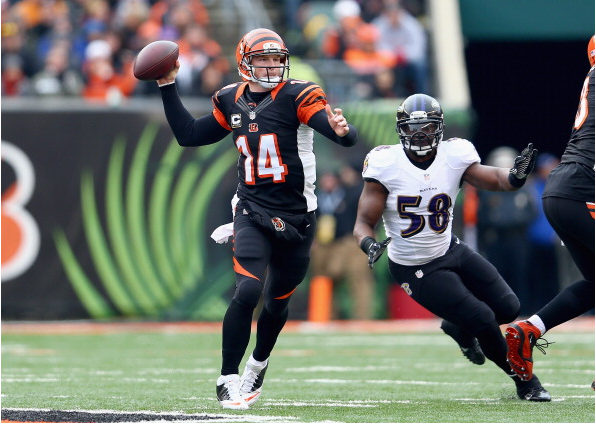 The folks over at Pro Football Focus (AKA “some dumbass website” according to Marvin Lewis) have deemed June the Month of the QB, analyzing the position in a number of statistical areas. Two of the breakdowns appear to be particularly revelatory in relation to the ever-mercurial Andy Dalton.

The first example looks at how NFL QBs performed in 2013 when in the pocket, rolling out (Ludacris’s favorite play), and scrambling. For Dalton, the disparity between in-the-pocket and scrambling was vast. On standard drops in the pocket, Dalton had a PFF grade of +13—eighth best in the league—including a completion percentage of 62.9%, an accuracy rating of 73.2%, and a 90.9 QB Rating. Where things went south was when Dalton got outside the pocket, specifically when scrambling. Forced to vacate the pocket on 29 dropbacks, Dalton’s performance was third-worst among QBs last season, ahead of only Terrelle Pryor and E.J. Manuel. He scored a PFF grade of -6.3 and QB Rating of 18.8, with a completion percentage of 20.8%, an accuracy score of 31.3%, and two interceptions compared to one touchdown. For the majority of QBs, (particularly those not named Russell Wilson), it holds true that they perform better with a standard dropback compared to running away from defensive pressure. The issue with Dalton stems from how much his productivity drops when on the run, even if it only happened roughly 30 times.

Those numbers get a bit more nuanced (and sample sizes a bit bigger) when looking at how Dalton performed against pressure and/or blitzes from opposing defenses. Going against the broad classification of “no pressure” on 479 dropbacks, Dalton was in the top-half of QBs and amongst the largest sample sizes, finishing with a PFF grade of +11.7, including a 68.1 completion percentage, 76.6 accuracy percentage, and a QB rating of 100.5. He was even better without a blitz (finishing sixth with a PFF grade of +13.7) and the combination of no blitz AND no pressure (11th, PFF grade of +9.0). In fact, he wasn’t exactly awful against straight pressure either, finishing in the middle of the pack with a -4.8 grade (in a category where few performed well). And no doubt most surprising, when facing pressure that DID NOT come from a blitz (meaning the pressure resulted from a typical d-line rush), Dalton was the best QB in the league with a PFF grade of +4.7 on 95 dropbacks.

But this is when things get all rough pumpkins for the fiery-haired signal caller: blitzing. He finished in the bottom ten of the league when simply facing any type of blitz with a PFF grade of -6.8, and was even painfully average in relation to his fellow QBs against blitzes with no pressure (a dangerous proposition for defenses due to the resulting holes in coverage) racking up a PFF score of +2.7 on 149 dropbacks—the latter number being the most for an individual QB last season. Against blitz-induced pressure, he was simply abysmal. His -9.5 PFF grade was third-worst in the NFL, above only Matt Schaub’s season of suckitude and Mike Glennon. Last season, the message was clear: if you blitz Dalton, he won’t respond well.

Ostensibly, that statement would apply to all quarterbacks. But while I assume that most QBs would rather not be blitzed, it’s also no mistake that among the top 10 QB performances against blitzes last season, the names include Super Bowl Champion Russell Wilson (#1), Drew Brees, Philip Rivers, Colin Kaepernick, Tom Brady, and Peyton Manning. The good QBs thrive in spite of the blitz, or at the very least figure out a way to handle it well. But the reason this distinction is also intriguing for Dalton is because the stats suggest that it’s not so much the pressure that hampers him, but simply blitzing in general. A quick look at the numbers clearly shows that Dalton is far more comfortable when he can be a standard, dropback-in-the-pocket passer, but they also make obvious that Dalton is an above-average to very good QB when there is no blitz, regardless of whether or not there is pressure. This also gives credence to the opinion—ok, my opinion—that when blitzed, Dalton freaks out.

Another interesting note: The fact that he faced the highest number of snaps last season resulting in a blitz-by-the defense-with-no-subsequent-pressure suggests two explanations. The first being that Dalton is more than capable of recognizing blitzes and directing protection schemes, and/or the second being that the Bengals offensive line is very adept at picking up said blitzes. My guess is that the true explanation is some closely related combination of each of those things. But if that’s the case, then this also suggests that Dalton freaks out against the blitz even if he knows it’s coming, and worse, even if it doesn’t get to him.

The prevailing wisdom among Bengals fans and NFL analysts is that in order for the team (and the QB) to succeed, the organization must do everything it can to put Dalton in the best possible position to succeed—surrounding him with a solid o-line, talented skill players, catering to his cerebral skills/quick release/close-range accuracy, and masking his lack of height and arm strength. This is also why there is such a lust for the impending Hue-Jackson-helmed run-heavy offense. If the Bengals can minimize the opportunities for Dalton to screw up, then maybe—just maybe—they can contend for a championship with him under center. The challenge now though is figuring out how all of those plans and scenarios the Bengals are enacting can prevent the other team from blitzing.

Because if I were the opposing defense, I’d be sending the house every chance I got.