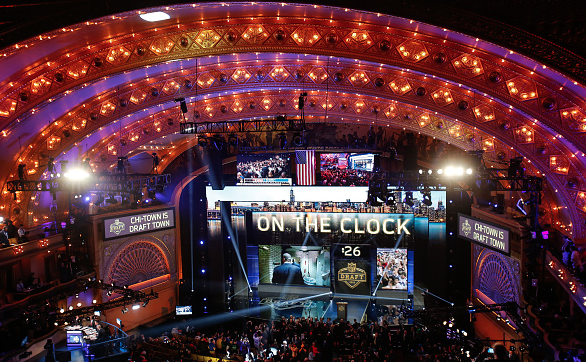 Remember last year, when I threw pragmatism out the window in favor of whimsy in our annual Bengals mock draft? When I wished upon a star that Sterling Shepard would be available when the Bengals selected in the second round?

Well, I was a fool. And this year, I won’t repeat the same mistakes again.

In the past, this post has been titled The 100% Correct, Entirely Unassailable, Perfectly Accurate Bengals Mock Draft, but that title seemed a bit presumptuous. Sure, I may have predicted Tyler Eifert’s selection the first time I did this, but one correct prediction doesn’t make me clairvoyant. So in order to recapture the glory of 2013 and earn this post’s title, I have created an advanced formula in order to incept the brains of the Bengals top brass and decide whom they are going to pick. The formula relies on answering a few important questions about each NFL Draft prospect and comparing it to the Bengals first round draft tendencies. Here are those questions:

What conference did you play in?
If the answer is anything but the Big Ten or SEC, odds are the Bengals will pass. Since Marvin Lewis took over in 2003, 10 of the team’s 15 first round selections played in one of the two conferences. The Pac 12 has accounted for two, but not one since 2008, and the AAC, Big 12, and Notre Dame each have one. That means, if you are an ACC player, keep on moving.

Were you an All-American?
In the Marvin Era, 80 percent (12 of 15) of first rounders have either been First-Team AP All-Americans or not on the list at all. That’s bad news for second or third teamers like Jamal Adams and O.J. Howard, guys that made it through the first part of the equation. This method is nothing if not rigorous.

Did you win an award in college?
We’re talking the main awards here, like the Heisman, Biletnikoff for receivers, Doak Walker for running backs, etc. If the answer is yes, you’re out of luck. While the Bengals have dipped into this pool before, nine of their first rounders exited college award-less. Maybe it’s not an overwhelming majority, but this equation is built on likelihood, not certainty. So even though players like defensive end Jonathan Allen and linebacker Reuben Foster, both first team All-Americans from Alabama, may seem like great fits, they each won awards. Sadly, the equation eliminates them.

Were you a highly touted high school prospect?
This threshold is pretty low. The Bengals have spread the love to five-star, four-star, and three star recruits evenly, so if you hit that bar, you’re still alive. If you summoned all of your pluck, walked on to the team, and now are considered a top prospect, you are not for the Bengals. Sorry, Haason Reddick. But this leaves one final question.

Did you run the 40-yard dash in 4.51 seconds?
Relatively speaking, forty times vary considerably in any given year. In 2017, skill players ranged between times of 4.22 seconds to 4.97 seconds. There are a lot of numbers in between. Darqueze Dennard, Dre Kirkpatrick, and Keith Rivers each hit the 4.51 second mark exactly. So is it merely a coincidence that the Bengals have drafted three players that have clocked the exact same forty times? Or perhaps something that could probably be explained away easily since there are a lot of players huddled within a few tenths of the 4.51 mark and there is likely at least some margin of error with the electric timing? No. A 4.51 second forty is clearly the secret to unlocking who the Bengals will draft. Two first-round prospects hit that time this year, but we’ve already eliminated one, Alabama tight end O.J. Howard. That just leaves…

He checks all the boxes, and some of them twice. (He was a First-Team All-American in 2015 and didn’t make the team in 2016.) The Bengals have Jeremy Hill and Gio Bernard, but neither running back has proven capable of being the go-to running back on a full-time basis. Plus, unless the Bengals find immediate help along the offensive line in the draft, they are going to have to find creative ways of giving Andy Dalton more time to throw. A solid running game with Fournette could do the trick. And although Fournette was hampered by injuries last year and had a few dud games, he is still really, really good at football. He did this to someone. And this to someone else. And also, this to lots of someones. Maybe the Jaguars or Panthers snag him before the Bengals, but if they don’t, the equation says this is the pick.

This is where we will see how much faith Marvin and Co. have in Jake Fisher and Cedric Ogbuehi. If they aren’t worried, maybe they go after a pass rusher or wide receiver. But after losing Andrew Whitworth and Kevin Zeitler, they should be worried. Feeney may be a reach here, but he is one of the top offensive linemen in a weak class, plus you’ll hear us do this on the podcast.

As Aaliyah once said, if at first you don’t Margus Hunt, dust yourself and Margus Hunt again. Like Hunt, Kpassagnon is a latecomer to football and he’s a big dude (6-7, 289). Unlike Margus Hunt, he’s not an old man already. These types of players have too much potential to be available in later rounds.

For a team that’d invested so heavily in the secondary, the Bengals still find themselves in need of help, with Dennard not showing much and Adam Jones saying, uh, words at police officers. My advanced scouting shows that Kazee has good hands, with 15 interceptions in his last two seasons at San Diego State.

Kevin Minter is only signed to a one-year deal, so he may not be a long term solution inside and the Bengals need to stockpile some talent at the position.

I had my sights set on a different player, Baylor wide receiver Ishmael Zamora. Then I read his NFL.com bio. Here’s how it starts: “Before the 2016 season…” he didn’t play much, then he blossomed into a starter, right? “…a video was released that showed Zamora beating his dog with a belt.” Oh hellllll no.

So I went with Hollins, who is much friendlier to animals. From his bio: “Hollins owned a python and boa during high school and bred African Cichlid fish—a hobby most college football players wouldn’t consider.” Notice the distinct lack of belts?

With Kpssagnon and Dunlap, the Bengals have a lot of tall defensive players. Maybe Geno Atkins would like a friend that is not a giant. And like Atkins, Price plays hard and uses his leverage well, says the YouTube video I watched for 45 seconds.

Every time Mama delivers a pancake block, the Bengals could play Bohemian Rhapsody.

We’re in the range where it makes sense to take guys that failed multiple drug tests in college.

NFL.com bio note: “Has a smallish frame, and could have issues as a last line of defense on kickoffs.” Smallish? He stands 5-9 and weighs 167 pounds. This kicker is the same height, is about 30 pounds heavier, and was decapitated. God speed, Jake Elliot.

Ward was a star quarterback for the Cougars, but he’ll be a wide receiver in the NFL. When I was a kid, I saw then Indiana quarterback Antwaan Randle-El play 43 different positions in one game, which blew my mind. Here’s hoping Ward can be the latest QB turned WR.