In the days leading up to All-Star Game festivities at Great American Ball Park back in 2015, Major League Baseball unveiled a promotion to determine “the four most impactful players who best represent the history of each franchise out of eight choices from its lineage.” Cincinnati’s “Franchise Four,” as selected by the fans, were indeed baseball legends: Johnny Bench, Barry Larkin, Pete Rose, and Joe Morgan.

At the same time, fans voted for the four “greatest living players,” and the announcement before Cincinnati’s most recent All-Star Game was accompanied with all the fanfare one might expect. One by one, they were introduced to the crowd and walked out to the mound arm-in-arm: Hank Aaron, Willie Mays, Sandy Koufax, and Bench. In the stands that day, I actually got chills. For baseball fans, it was a very cool moment.

At the time, however, I had a nagging thought: Why wasn’t Morgan standing with that group of the greatest living players? Why didn’t fans fully understand how special he was as a player?

Morgan, of course, passed away last October at the age of 77. The Reds have been wearing patches on their uniform with Morgan’s retired number 8 all season long, and this past Sunday at GABP (8/8 on your calendar, appropriately enough) Joe Morgan Day was celebrated. It was the perfect opportunity to acknowledge the career of the greatest second baseman of all time, at least according to baseball historian/analyst Bill James. (And according to me, as well, if you really want to know.)

Joey Votto agrees, and he went even further this past weekend as he discussed what Morgan meant to him personally and what he meant to this franchise. “Joe is the greatest second baseman of all time,” Votto said. “I don’t think there’s ever been a better player to put on the Reds uniform. He could do everything. He was the best hitter on the team. He was the best baserunner on the team. He was a Gold Glove defender. He played second base, a premium position. Most importantly, he was loved by his teammates. I think you could ask—when [legendary Reds manager] Sparky [Anderson] was alive—I think he believed he thought Joe was the best player on the team and the most important player of the team.”

In researching Morgan’s life and career for our book on Reds history, I learned a lot about the player and the man. For example, did you know that, as a teenager, Morgan once won an amateur citywide ping pong championship in Oakland? While his size (he was only 5-foot-5 and 140 pounds when he reached the big leagues) didn’t affect his table tennis game, it led most everyone to doubt his ability to play baseball at a high level. Morgan didn’t receive a single scholarship offer to play baseball at a four-year college, and even after playing brilliantly in junior college, he barely registered on scouts’ radars. His father memorably had to ply Houston’s scout, Bill Wight, with beer after beer just to convince him to raise little Joe’s signing bonus to $3,000.

One year later, Morgan was in the big leagues, finishing second in Rookie of the Year balloting after his first full season. But he continued to be underestimated, mostly because of his size. When he was dealt to Cincinnati in that massive trade prior to the 1972 season, many Reds fans were apoplectic that General Manager Bob Howsam had dealt away the popular Lee May and Tommy Helms in exchange for Morgan, center fielder Cesar Geronimo, pitcher Jack Billingham, and others. In The Cincinnati Enquirer, Reds beat writer Bob Hertzel, in one of his less-memorable moments, described the trade thusly: “If the United States had traded Dwight Eisenhower to the Germans during World War II it wouldn’t have been much different than sending May and Helms to Houston.”

Sparky, on the other hand, was delighted. “Boss,” he told Howsam, “you just won us a pennant with that deal.” He immediately declared Morgan to be a star on par with Bench, Rose, and Tony Perez, and Morgan set out to prove him correct. In fact, he almost immediately became the best player in either league.

During his eight years in Cincinnati, Morgan won five Gold Gloves at second base and was named to the National League’s All-Star team every year. His first five seasons, in particular, rank among the best stretches any player has ever enjoyed. He finished in the top five in Most Valuable Player balloting in four of those five seasons (in 1974, Morgan “only” finished eighth in the voting). He led the league in on-base percentage four times in that span and even led in slugging percentage in 1976, when he had 27 home runs. That was nearly unthinkable for a player of his size at the time, but then Morgan was accustomed to defying everyone’s expectations.

Sparky called Morgan the “smartest player I ever coached,” while Sports Illustrated declared him to be “baseball’s most complete player.” I call him the best Reds player of all time. To understand why, take a look at this chart listing the highest Wins Above Replacement totals in franchise history:

Morgan is only sixth on that list, to be sure. But he also played far fewer games and accumulated far fewer plate appearances then the other legends on the list. Now let’s look at the best individual seasons by WAR in Reds history. Here is where Morgan’s brilliance really comes into focus: 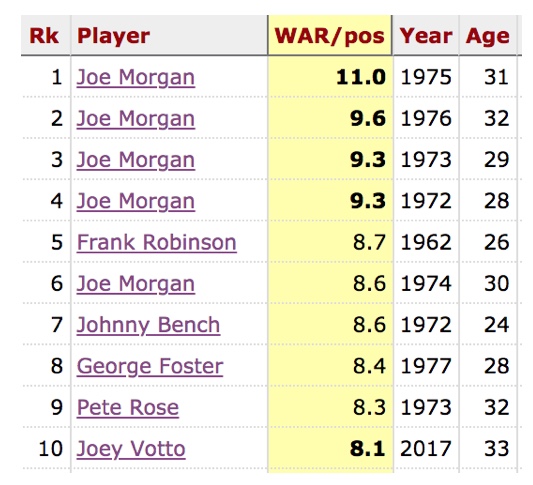 If you want to make the case for Johnny Bench as the greatest Red of all time, I’m not going to argue with you. Perhaps you think Frank Robinson, an inner-circle Hall of Famer, deserves that title. You may even think the Hit King is the greatest player in franchise history. (You’d be wrong about all of that, but to each his own.)

For my money—no Pete Rose pun intended—Morgan is far and away the best player ever to wear the uniform of baseball’s oldest franchise. Even if Reds fans sometimes haven’t quite appreciated it.

Morgan, of course, would never call himself the best, but he did enjoy being known as a complete player. “I’m blessed with the ability to do more things than other people can,” he once said. “I’m not the best power hitter in baseball, not the best hitter for average, not the best fielder, not the best base stealer. But when you put all those things together, no player in baseball can do any two of them better than Joe Morgan.”

At his best, I’m not sure anyone was ever better. Rest in peace, Little Joe.

Chad Dotson authors Reds coverage at Cincinnati Magazine and hosts a long-running Reds podcast, Redleg Nation Radio. His first book, The Big 50: The Men and Moments That Made the Cincinnati Reds, is available in bookstores and online.