Home News History There’s an App for That 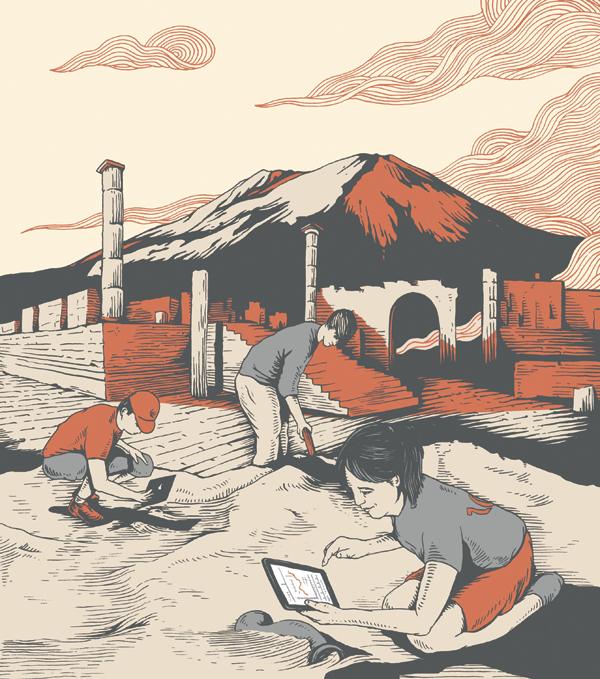 When the traveling exhibit A Day In Pompeii opens this month at the Cincinnati Museum Center, it will bring more than 250 artifacts unearthed from the ruins of the ancient Roman city, which was buried under lava, ash, and rubble in 79 A.D. during a catastrophic volcanic eruption. These artifacts rarely leave Italy and include household items, sculptures, frescoes, jewelry, coins—and resin casts of Pompeii’s victims, forever frozen in frantic poses that capture the moment their lives ended.

Pompeii lay buried under ash for nearly 1,700 years before an accidental rediscovery in 1748; since then, archaeological excavations have unearthed the city’s hidden history. Recently, Steven Ellis from the University of Cincinnati’s Department of Classics and his team have conducted cutting-edge archaeological research of a previously neglected section of Pompeii, spawning new findings about middle-class society and sparking a technological leap in how data is recorded and analyzed in the field.

In all fairness, the late Steve Jobs deserves some of the credit. When Apple’s iPad was unveiled in January 2010, Ellis and his UC colleague John Wallrodt immediately recognized it as the perfect digital tool to help improve the way they managed data in the trenches, where dusty, difficult conditions had stymied other digital devices. That summer, Ellis’s team of handpicked UC graduate students, armed with six iPads and joined by scholars from institutions around the world, returned to Pompeii, where Ellis and his previous crews already had been digging for five years. “The iPad completely revolutionized the way we collect data in the field,” Ellis says. “It saved countless hours of data entry and gave us much faster access and assimilation of shared data—data that is cleaner, more robust, and interactive.”

Jobs took such a personal interest in the UC project’s use of the iPad that he sent a team from Apple to document Ellis’s work, resulting in an article on Apple’s website that attracted international attention, crediting Ellis and his team with launching a new era in “paperless archaeology.”

But even before the technological hubbub, Ellis’s work in Pompeii had attracted international attention. Back in 2005, he acquired a permit to excavate a site called Porta Stabia, roughly a two-block area in the southern quadrant of the city that had been virtually forgotten. “I wanted to research a middle-class area in the city, in general, but I wanted this specific area because it’s an important neighborhood inside one of the city’s major gates, and it’s nestled against some large, public, monumental buildings,” Ellis explains. “I wanted to look at the connection, the negotiation, between public and private space, and the way middle-class society responded to economic and cultural changes. No research had been done on this neighborhood or its contribution to the city.”

Previously, Ellis explains, research of Roman society had taken a “top-down” approach—focusing on the elite classes and public institutions. “At Porta Stabia, we’re looking at society from the bottom up,” he says. “We’re excavating the lives of families that have never been told—the bronze-smiths, the storekeepers, ordinary people. [These are] families that never dreamt that 2,000 years later a team of archaeologists would take such a keen interest in their lives.” Imagine a parallel narrative in Cincinnati: In the year 4012, teams of archaeologists excavate what was once your neighborhood, hoping to discover the cultural dimensions of a Midwestern working class family during the long-ago era of such ancient tools as cell phones.

The opportunity to rediscover and retell the stories of Pompeii’s plebeian society is what keeps pulling Ellis back to Porta Stabia every summer, where he leads a team of roughly 35 researchers for an intense, six-week excavation. For those lucky students who join him in the trenches, it’s the opportunity of a lifetime—personally and professionally. “Pompeii is the best place in the world to study Roman archaeology. It’s the best laboratory; it’s just incredible,” says Allison Emmerson, a Ph.D. student who will be returning to Pompeii this summer with the UC team for the fifth time. “Those six weeks are so intense, a game of triumph and tragedy, full of eureka moments. That’s what I love about archaeology.”

Ellis, Emmerson, and other members of the UC research team shared that euphoric love of archaeological discovery—and their extensive Pompeian expertise—with the staff at the Museum Center in the months leading up to the opening of A Day in Pompeii. They helped plan and design educational programs, hands-on activities for schoolkids, and lectures that will enhance visitor experiences during the exhibit’s stint in Cincinnati. Meanwhile, the Museum Center’s in-house design team created special display materials showcasing Cincinnati’s connection to Pompeii.

“Steven [Ellis] and the UC team have been so generous in their desire to engage with us,” says Elizabeth Pierce, the Museum Center’s vice president of marketing and communications. “We see this as a tremendous opportunity to work with UC, and it’s a beautiful complement to the exhibit.”

And it was, serendipitously, the iPad that made that partnership possible, too: Back in 2010, when Pierce was doing some online research about Pompeii, she stumbled upon the Apple article about Ellis and his team. “I thought, ‘Oh my God, here we’re planning this Pompeii exhibit, and there’s a guy right here in Cincinnati who is doing all this stuff in Pompeii!’ ” Pierce recalls. “Little did I know then what a big deal Steven Ellis is in regard to Pompeii research.”

It was, from Pierce’s perspective, a perfect opportunity to highlight a local connection between the city and the traveling exhibit, enhancing Pompeii’s relevance for museum visitors. “We try to do this with our traveling exhibits, through lectures, bringing local experts into the discussion,” she says. “But Steven and his work is a spectacular example of a local connection. So we’re like, ‘Let’s celebrate him. Let’s celebrate his work.’”

And for Ellis and his team—who have enjoyed oodles of attention from far beyond this not-so-ancient river city—it’s nice to get a little recognition here at home, too.

Don’t Miss It
A Day in Pompeii runs from March 2 to August 12 at the Cincinnati Museum Center. Steven Ellis will give a free lecture on May 17 about his research in Pompeii.

Real-World Experience
UC grad students who work in Pompeii with Ellis play senior-level research roles and have a chance to publish their findings in leading academic journals. “I teach the students, but I learn so much from them, too,” Ellis says.

High Tech
A host of iPad apps make working in the Pompeian trenches easier. “On the iPad, it takes us five minutes to do a drawing that used to take a half hour on paper,” UC Ph.D. student Allison Emmerson explains. “And papers can be ruined in the field. Digital data is safer.”

Big Sandbox
This summer, Ellis’s wife and three young sons—twin 4-year-olds and a 3-year-old—will travel with him to Pompeii, where they can all play in the dirt together. “They’re a lot of fun,” Ellis says.