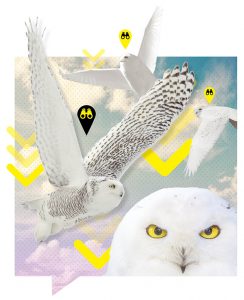 It’s not the creepy Hitchcock scene from The Birds where waves of various fowl blot out the sun of a small town. It’s not even the greatest snowy owl eruption here that ornithologists have seen.

“In 1945 and ’46 there were more than 130 snowy owls reported statewide,” said Jim McCormac, an Ohio Department of Wildlife biologist and bird blogger. But the unusual influx to the United States this winter of Bubo scandiacus, which can grow to over four pounds with a five-foot wingspan and live 10 years, has been so impressive McCormac is keeping a running tally of Ohio sightings on his blog (jimmccormac.blogspot.com).

He explained that the white-with-black-flecks juvenile snowy owls come to the Great Lakes and farther south looking for food. “These tundra birds were born in Quebec and the adults are protecting the food there [lemmings] and the young had to leave to find food.”

McCormac  is good, but the bird’s best PR man is probably the young wizard Harry Potter, whose loyal sidekick and mail courier is Hedwig, an adult snowy owl. As tundra birds they’re drawn to open, undulating ground like cleared farms or even airports. JFK International had a recent controversy after officials shot several snowy owls, fearing threats to jet engine intakes. After a human uproar they now catch and transport them.

So are they in the ’Nati? McCormac said as of early January, 114 snowy owls had been reported in 39 Ohio counties, with one as near as Highland. A few years back during a smaller visitation, one was spotted just up the road  in Wilmington. Keep watching the skies.