The team had spent months preparing for their 2020 season. The venue, the Cintas Center, was set. The team roster was ready, and the players felt they were in the best shape they’d ever been. The Cincinnati Rollergirls (CRG) were poised to have a great season. Then it all came to a halt because of the COVID-19 pandemic.

“It was just crushing. No one had any idea when we’d be able to get back to it, and I think that was the hardest part,” says Lauren Bishop, the principal owner of CRG, who’s also known by her derby name, “Miss Print.”

After doing ballet for 10 years and seeing Rollergirls on A&E, Bishop wondered why there wasn’t a team in Cincinnati. She soon connected with others who shared the same idea, and became a founding member of CRG.

Roller derby games are split into two 30-minute periods, which have multiple “jams.” Jams give the two 15-person teams the opportunity to score. There are three positions: jammers, who score points and have a star on their helmet; blockers, who are trying to keep the opponent’s jammers from scoring and protect their own; and the pivot, who wears a stripe on their helmet and can accept a special “star” pass from the jammer.

Roller derby is a high-contact sport, so the return-to-play guidelines set by the Women’s Flat Track Derby Association were strict. Transmission rates in the area kept CRG from practicing until 2022.

“I really mourned the loss of that season. Having played at that point for 11 years, I felt like I was watching my derby career end in slow motion,” says Erica Nyberg, a.k.a. “Wheezy.”

CRG is run entirely by volunteers, and the skaters pay to play. The COVID-19 hiatus created turnover within the team and raised questions as to whether there would be enough funding to continue.

“The 2020 season was going to be my second season playing. I had worked so hard to get on the A-team, and I was really proud of myself,” says Ursa Maimher, who has been skating with CRG since 2019.

Despite the loss of their season, the skaters did their best to stay positive. Team movie nights and show-and-tell sessions via Zoom, plus trips to outdoor skate parks kept their relationship with each other and the sport strong. For many on the team, it’s about more than just playing the game. The support offered by fellow skaters and the intensity of the sport keeps them coming back for more, so the pandemic delay hit them hard.

“I’ve learned a lot about myself physically, emotionally, and spiritually from playing this silly sport where we strap eight wheels to our feet and try to beat up our friends,” says Maimher, “and it’s been one of the most important things in my life since.”

CRG has been back to practicing for six months, and although roller derby seasons take place in the spring, the team just could not wait to get back to competing. They’re making their return on September 10 at the Cintas Center with a second game set for October 8 at Sports Plus.

The team is nervous but excited, and most of all they’re ready to get back to doing what they love. “I’m not sure that it feels real yet. I’m not even sure it’ll become real to me until I hear [the referee say] “five seconds” when I’m on the track for the first time,” says Maimher. 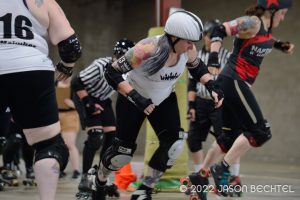 CRG wasn’t the only roller derby team affected by COVID-19; all their competitors are in the same boat. The CRG skaters feel as prepared as they can be, but they also don’t know what they’re up against. “The league has rankings, but you can’t look at them and know how correct they are anymore. Do I feel like we are as prepared as we could be? Yes. Do I know what other teams are like or what their most prepared state is? No,” says Nyberg.

As owner, Bishop is nervously excited in a different way. While she’s no longer competing, she wants the best for the team and hopes everything goes smoothly. “Game day is always stressful. There is a lot unknown. We’re preparing as best we can but I probably won’t relax until that first whistle blows at 6 o’clock,” says Bishop.

Maimher and Nyberg say you can start playing roller derby at any level, and CRG holds classes on Monday nights for skaters of all experience levels to get involved and learn more about what they do.

The volunteer non-skating officials and referees are crucial—teams can’t compete without them. They also always need more of the most important volunteers of all—fans.

“We have the best fans in all of roller derby. You can just feel the love and the excitement every time you step out onto the track,” says Nyberg.

No one on the CRG team expected their 2020 season to unfold the way it did, or for their pause from playing to last two and a half years. While it wasn’t easy, the team used the determination they put on the track in a different way: to push through the pandemic.

CRG launches the season at 6 p.m. September 10 at the Cintas Center, 1624 Musketeer Dr. on Xavier University’s campus. More information and tickets to CRG’s debut after their hiatus can be found on their website.

Click the photos below to see more of CRG.