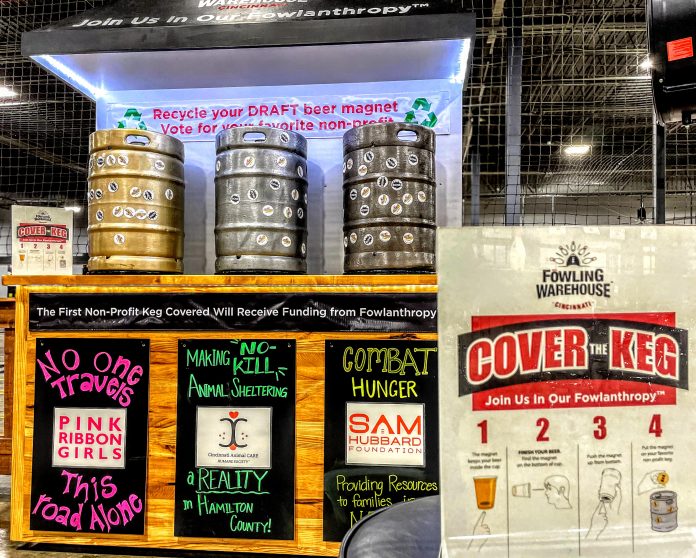 Earlier this spring, Fowling Warehouse Cincinnati launched their new philanthropic initiative “Cover the Keg.” A part of the franchise’s larger philanthropic efforts, aptly dubbed FOWLanthropy, this new project aims to help the environment and support Cincinnati’s non-profits. Customers who’ve purchased a draft beer attach magnetized cups onto a keg of their choice—encouraging patrons to upcycle waste while voting for a local charitable organization.

The Warehouse employees first dreamt up Cover the Keg to keep magnets out of landfills. The bar’s technology utilizes a “bottoms up” system to serve draft beer to customers, filling from the bottom with a magnetized seal. However, this system can wreak havoc on the local environment. Joey Saylor envisioned a solution to solve that problem and more, keeping magnets out of the landfill and endowing them with deeper value.

“[Cover the Keg] was meant to be environmentally friendly…as well as share with customers what we’re trying to do in the community, which is supporting deserving non-profits.”

Founded by the hometown hero, the foundation aims to fight food inequity and insecurity through various drives, fundraisers, and events. These efforts raise funds, while simultaneously bettering the lifestyle and education of young residents of Greater Cincinnati.

The foundation has a history with the Fowling Warehouse. This past year, the warehouse hosted the second annual collaboration event between Sam Hubbard’s team and the NFL to raise awareness and dollars for the foundation’s community efforts. The event has been a consistent success, selling out both years.

Right now, Cover the Keg is unique to the Cincinnati warehouse location but may be adopted by other franchises as a facet of the company’s FOWLanthropy efforts. Saylor says the next phase of voting is already off to a quick start. Customers can now choose to support The Talbert House, which provides family addiction services; The Cure Starts Now, an organization focused on cancer research; or the Cincinnati chapter of Big Brothers, Big Sisters.

“Our categories are very broad,” Saylor explains, “which allows the customer to say, ‘what do I care about?’ with their magnet.”

Saylor stresses that every aspect of the initiative is “really a response to the community,” evident in the deep connections with selected non-profits. Any and all donations are specifically tailored to the needs and initiatives of each potential recipient. Warehouse employees work directly with the non-profits to target their real funding needs to create a profound impact.

So, if you’re looking to get your fowling on, sip some local brews, and better your community, this magnetizing program might be right up your alley.