Home Dining Reviews Redden Fine Meats Is A Cut Above

Originally intended as a fairly simple butcher shop, Redden Fine Meats and Seafood has blossomed into a staple of the local food scene since opening last April.

When Madeira Meats, a mainstay of the community, suffered a fire and chose not to reopen, Sean Redden saw an opportunity in the gap left in his hometown. Despite his extensive restaurant and sales experience (he began working in the restaurant industry at age 15), running this type of shop has been a dive into new territory. “I had never even worked in a butcher shop prior to this,” he says. “The day we opened was day one for me.”

The store aims to bring in items customers can’t find elsewhere, particularly fresh fish and seafood. These days, Redden is a butcher shop, a deli, and a grocery store, all rolled into one. It sells nearly 140 pounds of chicken salad every week in addition to premade meals ready for customers to take home and heat up after work.

Although he hopes to give more east-siders the opportunity to experience the joys of a neighborhood butcher, Redden Fine Meats and Seafood is intrinsically linked with Madeira. “It’s been great,” he notes. “We’ve gotten a lot of community support, and we’re starting to pull now from those outside of Madeira—Indian Hill, Terrace Park, Mariemont—which is encouraging.”

House-made sausages, crab cakes, soups, and sandwiches keep things not only fresh but interesting. A recent collaboration with Twisted Greek food truck birthed the Loukaniko sausage, made with pork, orange zest, leeks, garlic, and oregano. “We do everything from scratch,” Redden says.

The grocery section features as many local producers as possible while also providing specialty grains, oils, and more to help customers transform what they buy from the case into a sumptuous meal. Products from Pickled Pig, Russo’s Ravioli, and Hen of the Woods keep regional favorites close at hand.

It is, as Redden describes, like a smaller Findlay Market packed into a historic train depot. 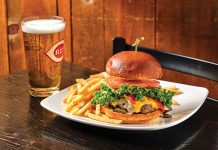