Beaks up and wings back, friends: the King penguins are on parade at The Cincinnati Zoo 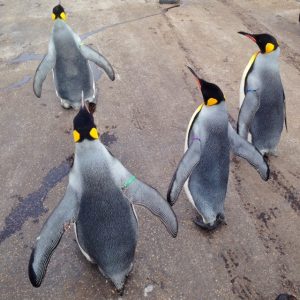 Every day at 11:00 am and 2:30 pm, come catch your favorite tuxedo-clad birds queue up for some public waddling. They’ve been at it since January 5, and they will keep on keeping on through the end of February.

The morning parade moves from the Wings of the World birdhouse to the Children’s Zoo, where they (literally) chill outside until journeying back to the birdhouse in the afternoon. If you opt for the afternoon walk, be sure to stick around to watch the birds re-enter the exhibit—not much tops the penguin’s stumbling forward flop into the water.

I caught up with Senior Aviculturist Cody Sowers, and it turns out the penguins’ names make all this even cuter: “We have a bunch of king puns in there…We have Kyoto and Naveen, which technically kind of fit in. Kyoto’s unofficial name is Cobra, and Naveen was a prince in The Princess and the Frog, so he’ll be a king eventually, right? But everybody else we have is Bernard King, Luther King, King Charlemagne, Burger King, Larry King, and B.B. King.

“We have around 60 total [penguins],” says Sowers. You can stop by to see King, Rockhopper, Magellanic, Little, and African penguins at the zoo, though the latter two species only come out during warmer weather. “It’s a pretty solid group of penguins in my opinion, especially for a smaller-market zoo…We have five species out of 17, which is pretty awesome. That puts us up there on the level with a lot larger zoos.”

To make the deal even sweeter, Zoo admission is half price through February 28.