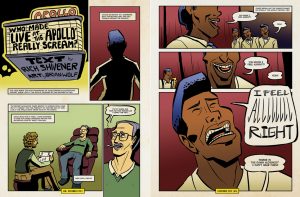 For the December 2013 issue of Cincinnati Magazine, artist Brian Wolf and I offer a six-page comic on Chuck Seitz, the man who really made James Brown’s record Live at the Apollo a screaming success. Released on Cincinnati’s legendary King Records in 1963, it’s considered one of the most electrifying live records out there, and Seitz’ contribution to it is still just a passing mention among books on King Records and that record. Without giving too much away, I hope you hear Live at the Apollo differently after you read our comic.

Our comic came together a few years after I interviewed Chuck Seitz for a project I was finishing in graduate school. We sat down in his Cheviot home in April 2010, talking at length about his journey to Cincinnati, songwriting and dealing with the influential—and sometimes explosive—Syd Nathan, owner of King Records. I was grateful (and still am) that Darren Blase, co-owner of Shake It Records, and Brian F.X. Powers, a music librarian at The Public Library of Cincinnati and Hamilton County, helped me get in touch with Seitz; they, too, thought Seitz’ work was incredible and needed more attention. I’m glad I got to speak with him before he passed away in August 2012.

To make a long story short (as Seitz said often during our interview), here you will find some notes and interview excerpts that didn’t make our comic. Seitz, 91 at the time of our chat, had a sharp memory. In our short time together, I didn’t ask many questions; I just listened as he walked me through his outstanding sonic journey.

On his road to recording music:
“It’s an occupation that I never planned on—anyway whatsoever,” Seitz remembered. “It just happened, but it sure was exciting in my day. I got into it back in the late 40s. I was a Greyhound bus driver and I stopped in Nashville overnight and went over to the Grand Ole Opry, and I really enjoyed that show. It was my introduction to that kind of music, as opposed to the music I had been doing since I was five or six years old. My mother started me out on the piano, and I graduated to flute and piccolo …. in other words, I knew modern and classical music.

All the sudden, here comes country music and, boy, that was really something…

I started collecting records from country musicians and, to make a long story short, when I made a run up to Cincinnati for Greyhound, Jimmy Skinner had a record shop down on Court Street that specialized in country records, so I was in hog heaven. The manager of the record shop was a guy by the name of Lou Epstein, and he really helped me. By this time, I was not only a collector, but I was writing songs, and Lou Epstein introduced me to a lot of the local musicians.

At the time in the 1940s, Vine Street had a bar or two on every block, and a lot of them had live music, and every one of them had a jukebox, and when Lou and I would travel up and down there amusing ourselves, he’d take a whole packet of quarters, and every jukebox he’d slip a quarter in. That’d give him six plays, and he’d punch up six country records—because country records was what he sold, and jukebox operators always came to him once a week. And every time one played on their jukebox, it marked up on their counter which records played the most….

Eventually, I went to work for them and quit Greyhound.

“Some of my songs I liked real well, and I got some of the guys who played up and down Vine Street to go into a recording studio and demo them. As far as I was concerned, these demos were just going to go into my catalogue of country music records, but some of them were pretty good. One night I went into a joint down there on Vine Street, and Joe ‘Cannonball’ Lewis, he was singin’ a song, and at the end of the verse or chorus he’d put in a train whistle. I was sittin’ there drinkin’ a beer, and by the time I finished that beer, I wrote a song called “Train Whistle Nightmare.”

When I finished the song I asked Joe if he’d record it for me. We went down to Herzog’s (once a recording studio, now a building that still exists on Race Street and is operated by Cincinnati CityBeat and the Cincinnati USA Music Heritage Foundation) and made it and several other songs, just because we were there and it didn’t take long.

And when I played it for Lou Epstein the next day, he said, ‘Man, that’s good. If I was you, I’d ship them dubs to Fred Rose of (MGM Records) in Nashville.’ And to make a long story shorter, I sent ‘em Friday and he called me Monday and said, ‘Man, I can get this on MGM if you want to.’  So just out of nothing, Joe Lewis got on MGM Records, so Joe was as beneficiary as I was from just happenstance!”

On working for King Records
Seitz spent time in local studios making and releasing records, later working for Billboard magazine as a circulation supervisor. One day, he got a call from Eddie Smith, chief engineer at King Records, getting offered a part-time job, mostly needed at night. Soon Seitz was working at Billboard and moonlighting as a part-time engineer at King. The latter was his real foray into, in his words, black music, namely rhythm and blues. It was also his time to prove his worth to owner Syd Nathan:

“King Records had a complete plant. They’d take a person’s tape, master it, press records, do the jackets, warehouse their product and do their shipping.  Well, King by that time was an international record company, but they were still independent. Now, Syd when he first started had to depend on the record wholesalers to buy his records, and they were uppersnickety, so Syd got the idea that ‘Hell, I’ll open my own distribution plants and I’ll put a guy in there and he’ll make the rounds to record shops and jukebox operators will come in there.’ Boy, that was the smartest move he ever made because that made him the number one independent record label in the country!

So the King Record sessions were a hell of a lot different from the little country things I did, although I had done some black music. Most of the black things I did before that were gospel. Syd made damn sure I got the experience.”

On cutting and pasting
Nathan could be rough on his employees, Seitz said, but also trusting:

“On a Saturday, Hank Ballard (and the Midnighters) came in to do a session. He recorded one song in there—that was one Syd really liked for a single.  He said, ‘The third verse of this song is the hook. You take that third verse, and put it in place of the first verse and just move everything back; right after the intro, come in with the third verse.’ One of the reasons he did this was, this was back when jukebox operators bought a lot of records. And when jukebox operators came to the distributor, they’d say ‘what’d ya got new?’ and you’d put something on, and they’d listen to 15–20 seconds of it and say, ‘I’ll take it’ or ‘I won’t.’ Syd knew jukebox operators were a big part of the record company’s sales, so he’d look for the hook.

So he said to me, ‘Can you take that third verse out and put it in the first verse?’

I said, ‘Yeah, I can do it after the session or tomorrow.’

He said, ‘No, I want to hear it right now, and I’ll show you exactly where to make the splice. You gotta make your splice here, cut it here and put it right here.

“I thought for a moment and said, ‘Syd, no, it won’t work that way. No way, in the first place, you’re taking a major chord, and you’re slipping a seventh (chord) in there, and it will really sound bad.’

And he said, ‘Goddamn it! Do you think I’m a ninny? Do it the way I said it and do it right now!’

Seitz recalled that Gene Redd, an important producer at King, was in on the session, and Redd trusted Seitz’ idea of where to make such a splice.

“So I flipped it just the way I knew it would work,” Seitz said, “and it was just fine.”

Seitz gained Nathan’s respect that night—“for refusing to do something wrong and being able to do it right. And from that day on, he treated me 200 percent better. “Hell, he invited me over to his house for a pool party,” Seitz remembers.

After King
Seitz was promoted to chief engineer in 1961, and less than two years later, he was “fixing” Live at the Apollo. He left King and joined RCA in 1964.

“Later on, I went to Nashville and I was an engineer for RCA. Well, James Brown came down to play. I went to the ballpark where he was having his show that night. I saw him and he welcomed me. He said, ‘Hey, man, that Apollo record has sold over a million!’ I said, ‘How about getting’ me a gold record?’

But King was a joy to work with. The only thing that wasn’t a joy was that it wasn’t major league. Most people can understand a younger man wanting to get ahead.”